Smallpox, eradicated in 1980, still remains the only success story in mankind’s efforts to eliminate disease. In 1986, inspired by this success, the World Health Assembly (WHA) called for dracunculiasis elimination and the global Guinea Worm Eradication Programme was launched, supported by organisations such as the World Health Organisation, United Nations Children’s Fund, the Centre for Disease Control and the Carter Center.  At that time, dracunculiasis was endemic in 20 countries with 3.5 million cases observed each year.

A scourge of mankind since ancient times, the Guinea Worm (Dracunculus medinensis) causes dracunculiasis, a disease of the inhabitants of poor rural villages with no access to safe drinking water.  The Egyptian  Ebers papyrus, a medical papyrus dating from 1500 BC, documents the cure still used today, 3,500 years later; slowly winding the female worm round a stick as it emerges from a skin blister.

Infection occurs when stagnant water containing water fleas infected with Guinea Worm larvae are ingested. The smaller male fertilises the female and then dies.  During the next year these female round worms grow to about a metre in length and migrate to the extremities where, full of eggs, they coil up and cause the formation of a blister. The blister causes an extremely painful burning sensation, hence the name fiery serpent or dragon, (giving rise to the scientific name Dracunculus).  When limbs are plunged into water to alleviate the burning feeling, the worm emerges from the blister and releases eggs into the water. Here they are can be eaten by water fleas and the larval stage develops in this second host.  If this stagnant water is the only source of drinking water these water fleas (copepods) may be accidentally ingested, another person is infected and the cycle continues. Thus the creation of a burning blister may be regarded as an adaptation that ensures transmission of the parasite.

Efforts to control and then eliminate the disease have focused on breaking this cycle of infection and are based on a few simple strategies; education programmes, the provision of clean drinking water, surveillance and containment. Filtering potentially contaminated water through a simple cloth or mesh is enough to prevent infection by removing water fleas, though the drilling of bore holes or digging wells to provide safe water for communities is preferable.

Village-based surveillance by volunteers is set up to detect new cases.  Diagnosis of infection is unambiguous once the worm emerges from a blister and the infected person must then be prevented from immersing the affected area in a source of drinking water, the wound treated and the worm removed. Vector control of potentially unsafe water sources is implemented by treatment of water with Temephos insecticide (Abate®). 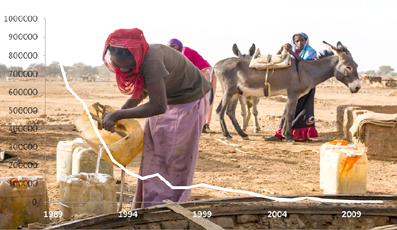 Monthly reporting of new cases informs the pre-certification of disease elimination, which occurs after a year without new cases. An area is declared free of dracunculiasis after 3 more years of zero new cases. Control efforts have met with tremendous success. Although the initial targets for elimination were not met, by the 6th December 2013, WHO had certified 197 countries and territories as free of dracunculiasis transmission, and countries endemic for the disease have been reduced from 20 to 4; leaving only Mali, South Sudan,  Ethiopia and Chad.  In the month of January 2013, no cases were reported worldwide for the first time since the eradication program began.

All this bodes well for imminent eradication, however, a recent paper published in the American Journal of Tropical Medicine and Hygiene reports a worrying change in the epidemiological patterns of the disease in Chad. After 10 years free from dracunculiasis new cases were reported in 2010. Unlike the usual pattern, cases were isolated, with usually only one per village, and they were not associated with common water sources. In addition, the peak transmission period has shifted to later in the year compared with the 1990s. Observations were also made of worms emerging from dogs. Infections in dogs were confined to a narrow strip along the Chari River, where the majority of human infections occur. Dogs were found to harbour more worms than humans and dog owners reported that the site of worms emerging from dogs was a new thing. Morphological and molecular analysis, including whole genome sequencing, confirmed that worms coming from dogs were the same species, D. medinensis, as those from humans and no significant differences were detected between samples from Chad and those from Ghana and South Sudan.

The authors suggest that, in Chad, the Guinea Worm may have a paratenic host (an additional, unnecessary, host in the life cycle of a parasite) such as a fish or frog that had consumed infected water fleas. This is thought to be the case for the related D. insignis. Thus, an alternative route of infection, consumption of uncooked, dried or smoked fish by humans and dogs was suspected as a source of infection. Ingestion of a raw or uncooked paratenic host by humans and dogs could indeed give rise to infection, however, no Dracunculus larvae were found in the fish, frogs or lizards that were examined. If this speculation were true, two factors suggest it may be a new phenomenon; the practice of mass harvesting of fish, that coincides with the new peak period of transmission, has been practiced for generations and  there seems to be no reports of dracunculiasis in dogs in Chad in the period between initial elimination of the disease and its re-occurrence.

In the light of these findings Mark Eberhard and his team report that the Government of Chad is considering additional control options, including those directed at preventing potential infection via the consumption of fish.

These observations pose the question of how the new outbreak arose in Chad; has there been continuous transmission that has gone undetected during the years that it was thought to be eradicated, has the worm been circulating all this time using a paratenic host / dog infections, is this a new life history strategy that has just emerged, or are these new infections a result of a reintroduction of the parasite from an area where it is still endemic. Any of these scenarios has implications for containment and surveillance policies in other countries but if the latter is true, the presence of a paratenic host or the possibility that dracunculiasis is a zoonosis will make eradication more difficult.

Whatever the route by which Chad has regressed from a country certified free of dracunculiasis back to an endemic one, the consequences for the imminent eradication of this disease are worrying. Instability in Mali and South Sudan are likely to hinder surveillance and containment measures in 2014 and, whilst transmission is still occurring in these countries, the possibility that reinfections could occur in countries once endemic but now free from disease must be accepted. This has been seen only to clearly this year for another eradication campaign when WHO confirmed 17 cases of polio in Syria.

Rinderpest was eradicated in 2010. https://en.wikipedia.org/wiki/Rinderpest