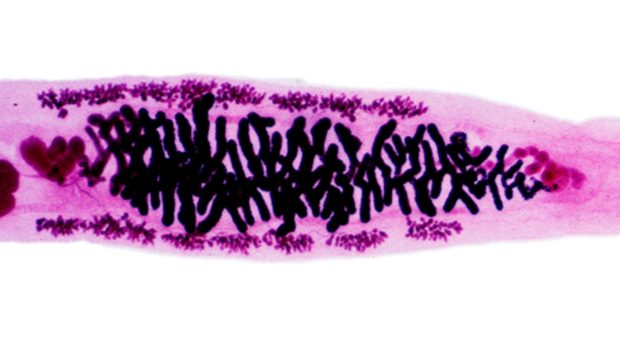 Opisthorchiasis is a disease caused by infection with parasitic flat worms (trematodes) from the genus Opistorchis, specifically Opisthorchis viverrini and Opisthorchis felineus. Of the two species, the human liver fluke O. viverrini is responsible for the vast majority of Opisthorchiasis cases, with 67 million people at risk of infection across Thailand, Laos, Vietnam, and Cambodia.

Opistorchis viverrini parasitises two intermediate hosts – aquatic snails from the genus Bithynia, in which it develops into a free-swimming cercariae, and a fish belonging to the Cyprinidae family (such as carp and minnows), forming cysts in the skin or muscle. A mammalian host can then become infected through consumption of infected raw or uncooked fish. Once matured, O. viverrini resides within the biliary ducts of the host’s liver, causing chronic inflammation and severe hepatobiliary damage that can lead to cholangiocarcinoma (cancer of the biliary ducts).

The life cycle continues as a result of poor sanitation and unsatisfactory sewage-removal infrastructure, allowing parasite eggs to be released into the environment where they can infect the aquatic snail host.

Current treatments are effective, but also largely inadequate, as they do not prevent immediate reinfection the next time an infected fish is ingested.

The search for vaccine-candidate antigens

Proteins found in the parasite’s excretions, and at the tegumental surface membrane of these flukes, have been shown to play essential roles in parasite survival and pathogenesis within the host, and thus are considered attractive targets for the development of a novel vaccine to treat and control infections.

One protein of interest in O. viverrini, as well as several other trematode species (such as Schistosoma spp.), is tetraspanin-2 (TSP-2). Tetraspanins are a family of surface membrane-anchored proteins abundant on the tegument and membranes of extracellular vesicles (EVs) of trematodes.

TSPs have two characteristic loop structures known as small (SELs) and large extracellular loop (LEL) domains that interact with other transmembrane proteins to stabilise, maintain, and repair the parasite’s tegument. The LEL domain of TSP-2 in particular has been established as a major target for the host’s immune response against the parasite and has even been implicated in the parasite’s ability to manipulate and hide from the host’s immune system.

Previous work by Sujittra Chaiyader and colleagues even showed that tegument- and EV-bound TSPs are actively internalised by human cholangiocytes (cells lining the bile ducts), and that a subunit vaccine targeting TSPs on parasite-secreted EVs provided protection in an O. viverrini infected hamster. Additionally, the research group found that antibodies raised against these TSPs block the uptake of parasite EVs by host cholangiocytes.

In the most recent study from this group at Khon Kaen University in Thailand, they investigated  the role of host antibodies against O. viverrini-TSP-2 (termed anti-Ov-TSP-2 antibodies) in protecting infected hamsters. Specifically, they tested the protective capabilities of the IgM monoclonal antibodies 1D6 and 3F5 against the exposed LEL domain of Ov-TSP-2.

Following their immunisation with 1D6, 3F5, or a control, hamsters were infected with O. viverrini (challenge infection). To address this, splenocytes  from mice immunised with Ov-TSP-2-LEL proteins were fused with myeloma cells, which generated antibody-producing hybridoma clones. Two IgM (monoclonal) antibody-producing clones (1D6 and 3F5) were then selected, based on their strong reactivity to Ov-TSP-2-LEL, and were purified for use in the passive immunisation of hamsters.

Detecting monoclonal antibodies in the blood sera of immunised hamsters

IgG, IgM and IgA antibodies targeting the LEL domain of Ov-TSP-2 specifically, were measured from the sera of hamsters pre-immunisation, pre-challenge infection and post-challenge in order to determine the hamster’s specific antibody response to O. viverrini infection.

Hamsters immunised with 1D6 or 3F5 showed significantly higher IgG and IgM levels in their sera post-challenge infection, compared to levels before parasite infection, indicating that O. viverrini infection results in a major immune response by the host against Ov-TSP-2-LEL.

Currently it’s unclear whether the two IgM monoclonal antibodies 1D6 and 3F5 bind to different epitopes on Ov-TSP-2-LEL, however, and is something that will need investigating in future work.

The uptake of parasite EVs by host cholangiocytes in vitro was also found to be significantly reduced for both 1D6 (97.5% reduction) and 3F5 (97% reduction) compared to pre-immunisation levels, as well as the treatment control. This inhibition of parasite-EV uptake by host cells provides a possible mechanism by which this vaccination strategy may exert its effect – by interrupting vesicle-mediated host-parasite interactions.

Heading in the right direction

This work sheds light on the role of antibodies in inferring protection against TSP-2 from Opistorchis viverrini infection in hamsters, and is the first to report a successful passive immunisation against human liver fluke infection.

The work presented here is consistent with the outstanding work already conducted by this group, indicates that Ov-TSP-2 is a promising vaccine candidate antigen, and further supports the use of antibodies as an efficacious treatment strategy against trematode tetraspanins in general.