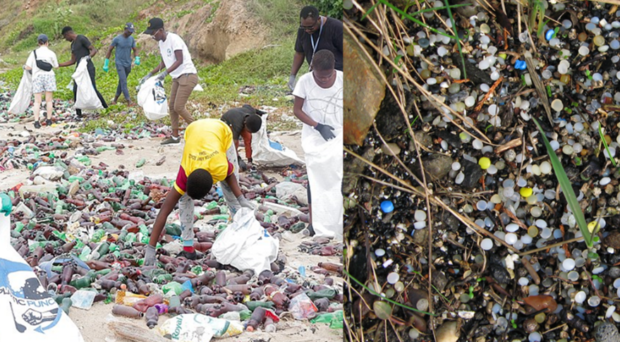 Since 1964, the global production of plastics has increased 20-fold. Every year, approximately 13 million tons of plastic waste contaminate our oceans, with at least 5.25 trillion individual plastic particles estimated to be circulating in the oceans worldwide.

Microplastics, defined as plastic particles < 5mm in size, are either formed for industrial purposes (primary microplastics) or by the gradual degradation of plastic waste (secondary), such as the disintegration of fishing nets or water bottles.

Microplastics have attracted increasing attention, partially due to the ease with which they can be ingested by animals and humans. Microplastics have so far been found in 220 different species, both terrestrial and aquatic, many of which have significant commercial importance due to their consumption by humans. Accumulating microplastics in marine food chains is well-documented, and is a considerable threat to marine wildlife, from shellfish and fish, to long-lived marine megafauna such as turtles, seals and whales. Contamination of marine environments with microplastics is thus a substantial concern for both wildlife and human health.

The effect of microplastic ingestion on humans resulting from seafood consumption, among other things, had been less well studied, although the adverse health effects associated with microplastics are clear.

Many biochemical substances (e.g. polysaccharides), as well as colonies of bacteria, present in the surrounding seawater can bind and become associated with the surface of microplastics, forming sticky biofilms (termed the Plastisphere). These biofilm-covered microplastics therefore have the potential to transport a possibly diverse range of pathogenic bacteria, fungi or algae, which could increase the transmission ranges of these pathogens and have a significant impact on human and animal health.

Few studies have so far investigated this possibility, and to date there are no studies exploring the possibility of terrestrial, zoonotic protozoan parasites being transported in these biofilm-coated microplastics.

A recent study by a collaboration of North American researchers, published earlier this year in Scientific Reports, therefore set out to investigate the possibility of important pathogenic protozoans associating with microplastic surfaces.

The researchers undertook laboratory-based, proof-of-concept experiments to test this hypothesis of pathogen-microplastic association, as well as whether different types of microplastics (polyethylene microbeads and polyester microfibers) were better for pathogen association.

They focused on the pathogens Toxoplasma gondii, Cryptosporidium parvum, and Giardia enterica, not only because they’re important disease-causing pathogens in humans and animals, but also due to evidence of their long-term persistence in seawater and their global prevalence in commercial shellfish.

The ability of the terrestrial protozoal pathogens to bind and associate with 500μm microbeads and 800–1200μm microfibers was initially tested, as well as how any association changed over a 7-day period. The microplastics were ‘conditioned’ in collected seawater to give time for a bacterial biofilm to form around the plastics, and therefore simulate natural conditions more closely.

The researchers found that all three of the protozoan pathogens were able to readily associate with the surface of both types of microplastics, even on day 1 of the experiment. Over the duration of the 7-days, they also found an increase in the number of pathogens, from all three species, associating with the microplastics, which corresponded with a decrease in parasite numbers in the surrounding seawater.

When observed under a light microscope, it appeared that T. gondii was indeed associating with the microplastic particles within the sticky biofilm, suggesting that biofilm formation of plastic debris is an important mediator of pathogen-microplastic association.

In their second experiment, the researchers explored whether the type of microplastic (bead or fibre), or its size, effected the ability of the three pathogens associate with the microplastic.

They tested four different sizes, 100 and 500μm microbeads, as well as 400-700 and 800-1200μm microfibres, and were intended to simulate the sorts of microplastic sizes seen in the environment and that have been found ingested by fish and shellfish, such as plastic pre-production pellets, microbeads from personal care products, or microfibres found from fishing nets and textiles.

Overall, it was observed that pathogen oocysts associated more readily with the larger microfibers, as opposed to the other microplastic types and sizes. The highest number of C. parvum and G. enterica were found on the largest microfibre, whereas T. gondii associated similarly with all types and sizes.

Often, the most common microplastic found in the environment, as well as detected in several fish and shellfish species, are microfibres filaments, and so these findings are particularly worrying in terms of protozoan pathogen migration throughout marine ecosystems.

Increased association of the pathogens with microfibres has been suggested to result from their rough and heterogenous surface being ideal for biofilm formation, although other factors also likely play a role (such as hydrophobicity, plastic chemical characteristics or chemical and bacterial composition of the biofilm).

Collectively, the findings of these researchers illustrate a novel mechanism by which anthropogenic pollution of our ecosystems with plastic debris may facilitate the further spread and transmission of important protozoan pathogens throughout the marine environment, and which may have significant consequences for animal and human health worldwide.

It also seems that microplastics may enable greater pathogen entry into marine food webs, given the many reports of microplastics ingested by multiple fish and shellfish species.

It was found that marine bivalves (such as clams, oysters, mussels and scallops) are more likely to ingest aggregated particles (such as microplastics with sticky biofilms) than free floating particles, and so pathogens incorporated into these biofilm communities may be increasingly ingested by these marine bivalves, thus increasing the risk of pathogen transmission to both humans and animals.