Giardiasis is caused by the parasite Giardia duodenalis which lives in the intestine of infected humans and animals. It causes severe diarrhoea and dehydration (amongst other symptoms) and is shed through faeces and transmitted to others via that faeces (e.g. when it contaminates food or is ingested due to poor hand hygiene). In their review of zoonotic giardiasis, Weilong Cai and colleagues state that genotype distribution studies on the parasite responsible imply that zoonotic giardiasis is less common than widely believed. They say that the main cause of zoonotic giardiasis comes from a small group of animals such as nonhuman primates, horses, rabbits, guinea pigs, chinchillas, and beavers. Transmission via ingestion of contaminated meat is a major route of zoonotic parasite diseases. For example, the COVID-19 virus is thought by some to have spread to humans from bats via the meat of an intermediary animal. In his Review, Sameh Abuseir describes the main zoonotic parasites transmitted through meat in the Arab world. In this area of the world, the main sources of meat are cattle, sheep, goats and camels, and meat-borne parasites fall under two categories: helminths and protozoa. The helminth Taenia is the most frequently reported in this region, and Taenia saginata (beef tapeworm) is the most likely cause (as the others are mostly transmitted through pig farming or pork consumption).

Toxoplasmosis is described in the same review as being prevalent through infected meat consumption in the region. However, the presence of the protozoan Toxoplasma gondii within domestic animals can vary by country. For example, in Egypt the seroprevalence the parasite in sheep is 43.7%, goats 64%, cattle 10.8%, chicken 14-47%, and camels 17.4%. However, in Sudan, the seroprevalence levels in camels was found to be between 13.3 and 38%. Reports from Tunisia, Palestine, Algeria, Libya and Morocco state these figures to be different all together.

The increased demand for meat in this region (and indeed the entire world) has only lead to more intensive farming and the risk of parasite infected meat spreading amongst livestock and then being consumed. In conclusion to the review, Sameh Abuseir calls for a joint up approach by governmental and non-governmental organisations to better “monitor and control zoonotic meat-borne infections.”

Moving on to zoonotic disease threats from wild animals, Marcos Antonio Bezerra-Santos and colleagues review the role played by opossums in the transmission of not only zoonotic parasites directly but also disease vectors and vector-borne pathogens to humans and domestic animals. 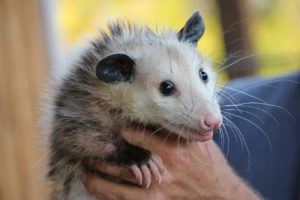 Opossums are native to the Americas and play a very important role in ecosystems (and, yes, they look cute too), but they are also the hosts and reservoirs of several important human and domestic animal parasites (Leishmania infantum and Trypanosoma cruzi) and amplifiers of others such as Rickettsia rickettsii. Couple this with the fact that they are highly adaptable and able to thrive in human-modified environments, and their importance in zoonotic diseases becomes clearer.

Ticks are arthropods that carry Rickettsia species of parasites and they feed from a wide range of animals including wild animals (such as opossums) domestic animals and humans. As opossums move between wild natural areas and agricultural or urban areas, they exchange the ticks with the animals and humans they come in close contact with and, via the ticks, the zoonotic parasite.

Fleas are another arthropod disease vector that opossums harbour – these include the bacterial species that causes the Plague – and Bezerra Santos and colleagues suggest that opossums should be studied further as a potential reservoir for the Plague.

Opossums have been directly linked with the spread of Leishmania (via sand flies) in humans, dogs and cats in urban and semi-urban areas. In Northeastern Brazil, for example, at times when there are higher opossum numbers in the area (during colder rainy times of the year) there is an increase in new cases of visceral leishmaniasis in humans.

Like in the cases of meat consumption previously discussed, zoonotic parasites can be spread through the consumption opossum meat (from non-legal game hunting). Trypansoma cruzi (that causes Chagas disease) is thought to be spread this way and so are endoparasites such as helminths.

The Review concludes by calling not only for more research (as this is still scant) and for education of the public of the risks brought about by direct contact with these animals (e.g. through hunting them).

I do not think we will ever be free of zoonotic infections – simply because we have such a close and dependent role with animals and share the same environment. Even with wildlife, we do interact with them, especially as we encroach on their natural habitat through urbanisation. However, that does not mean we cannot reduce the risk of zoonotic parasites being transmitted to humans by taking several courses of action – including better hygiene practices, better farming practices, impinging less on the natural habitats of wildlife, reducing food waste (and so not encouraging wildlife to come searching for food in our bins/ trashcans) and so on.