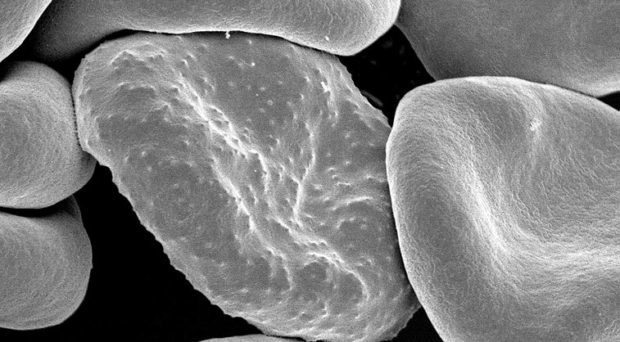 The most severe symptoms of malaria are associated with infection by the malaria parasite, Plasmodium falciparum, with pathologies including severe anaemia, acute respiratory disease and cerebral malaria. The latter is marked by the sequestration of infected red blood cells (IRBCs) in the brain microcirculation, resulting in blood vessel occlusion, inflammation and brain swelling that can lead to brain stem herniation, causing respiratory failure and death.

This sequestration occurs because red blood cells infected with this malaria parasite can adhere to two molecules expressed on the surface of the endothelium of blood vessel in the brain, namely intercellular adhesion molecule-1 (ICAM-1), and endothelial protein C receptor (EPCR).

At a late stage of red blood cell infection, P. falciparum produces a protein, erythrocyte membrane protein 1 (PfEMP1), that is exported to the surface of the IRBC and acts as a ligand, binding to one or both of these receptors.

This is a family of proteins that are encoded by a group of about 60 genes called var genes, that help the parasite evade the immune system (see Will Hamilton’s excellent YouTube video explaining this). Parasites expressing a subset of PfEMP1 proteins, group A+CM, are associated with cerebral malaria.

Group A+CM PfEMP1 proteins facilitate the binding of IRBC by being ligands to both ICAM-1 and EPCR receptors. They have a highly conserved motif in their ICAM-1 binding domain, the DBLβ domain, that is not present in other groups of PfEMP1s, that just bind to one or other of the receptors.

But why should binding to two receptors, not just one, cause the severe symptoms of cerebral malaria?

In order to investigate the mechanism underlying the association between group A+CM PfEMP1, sequestration of IRBCs and cerebral malaria, Yvonne Adams, Anja Jenson and colleagues at the University of Copenhagen and elsewhere, have used a model of the blood brain barrier that has given rise to some surprising findings.

Their work, published in the Journal of Experimental Medicine, explains how they incubated RBCs infected with parasites expressing group A+CM PfEMP1s, or parasites that did not express dual binding PfEMP1s, with human-brain microvascular endothelial cells, cultured in a monolayer. A particular pattern of staining for ICAM-1 was only observed around the A+CM lines and only these lines showed an increasing level of binding to the endothelial cells over time.

Furthermore, the membranes of endothelial cells incubated with A+CM lines exhibited circular gaps the researchers called ring/docking structures. Their electron microscopy images revealed changes to the endothelial cell membranes; microvilli extended outwards, some surrounding IRBCs and, most remarkably, intact IRBCs were seen within some endothelial cells. None of these phenomena were seen when RBCs were infected with other PfEMP1 – expressing parasites.

Two experiments supported the view that internalisation of IRBCs expressing group A+CM PfEMP1s occurred in an ICAM-1– and PfEMP1-dependent manner:

2) When IRBCs were initially incubated with antibodies generated against the specific ICAM-1–binding DBLβ domain, internalisation of group A+CM infected cells was significantly reduced.

IRBCs infected with parasites expressing group A+CM PfEMP1 adhered to the endothelial layer and, after 8h of culture, some were visualised right inside the spheroids, having transmigrated the endothelial cells. Preincubation with the antibodies used in the experimenters’ first study inhibited this.

Uptake experiments showed that the permeability barrier created by the endothelial cells was disrupted and they increased in volume due to cellular swelling. These observations were not seen when RBCs infected with parasites expressing other PfEMP1 groups were incubated with the spheroids.

The team then addresses the question of whether these intriguing in vitro observations mirrored the situation in the brain of a patient with cerebral malaria. Post-mortem analysis of the brains of two cases of fatal cerebral malaria showed vessels blocked with IRBCs. The membranes of some endothelial cells were swollen and the presence of the malaria pigment, haemozoin, was seen within some of them, suggesting internalisation of malaria-infected red blood cells had occurred here too.

A new hypothesis for the cause of cerebral malaria?

The authors propose that the possession of the binding capacity to both ICAM-1 and EPCR receptors on endothelial cells causes a clustering of ICAM-1 receptors on the cell surface (seen as the docking sites in their experiments). Endothelial cells are then triggered to phagocytose these IRBC. The RBCs and parasites then degrade, releasing toxins, including haemozoin.

As yet, it is unclear how much the loss of blood brain barrier integrity, internalisation of IRBCs or their sequestration in, and occlusion of, the brain microvasculature contributes to the pathology of cerebral malaria. But the discovery that expression of one particular family of PfEMP1 proteins is associated with all these pathologies is clearly a big step forward in our understanding of the interaction between malaria parasites and brain cells.