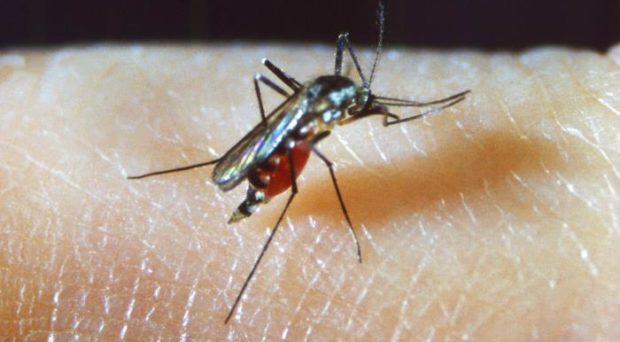 Right posterolateral view of a mosquito, which had landed on the skin of a photographer, willing to allow this hungry female to touch down in order to capture this picture. Credit: Kay DeWitt/CDC (https://phil.cdc.gov/Details.aspx?pid=21021)

In 2019, official WHO reports stated that there were an estimated 229 million cases of malaria worldwide. Around 90% of these cases particularly of Plasmodium falciparum occurred in Africa, where lack of access to malaria diagnosis is largely due to shortages of expertise and equipment. The non-specific symptoms with which malaria initially presents further exacerbate the diagnostic challenge as it means that laboratory confirmation is required. Although progress has been made during the last 10 years, there is currently no approved vaccination for malaria therefore rapid and early treatment with antimalarials and supportive management remains vital.

Particularly during the pandemic of COVID-19, traditional methods of diagnosis and screening have been subject to disruption. There are encouraging novel innovations arising in the world of malaria research, such as ‘Malaria Screener’ a new smartphone application for automated malaria screening.

The gold standard for malaria diagnosis is currently still the microscopic examination of stained blood smears, as it allows characterisation of parasite species, quantification of density and assessment of the efficacy of treatment – however, many regions wherein malaria is endemic are often lacking in trained personnel to perform microscopy for diagnosis. Nowadays the use of rapid diagnostic tests (RDTs) has become more widespread due to the ease of use – a study found the sensitivity and specificity of these to be around 29% and 89% respectively, which highlights room for improvement.

Yu and colleagues present ‘Malaria Screener’, a novel smartphone-based semi-automated system which can analyse images for malaria screening, combined with a user-friendly interface. The setup, involving an Android smartphone in conjunction with a microscope adaptor, is an affordable setup which may assist malaria diagnosis in resource-limited areas.

The application consists of three independent modules on slide-screening, data management and data upload which work together to achieve the desired function – the application is designed to be adaptable and customised, with open-source code hosted on GitHub. Furthermore, the parasite detection algorithm can be easily swapped – this ensures that other groups in this field of research can experiment with other algorithms and approaches to advance the automation of malaria diagnosis, thus serving as a code base for future developments within the area.

Another paper published in 2020 by Kuo and team in Taiwan. developed a malaria detection algorithm which was able to achieve expert-level performance in detecting P. falciparum in thin blood smear images – this further highlights that detection algorithms could be key in the acceleration of developing automated malaria diagnostics.

Combining the high-resolution cameras and computing power of modern smartphones, Malaria Screener can screen both thin and thick blood smear images to identify P. falciparum parasites. The research team validated the smartphone application on blood smear images from 150 patients infected with P. falciparum, and 50 control patients in Bangladesh – at a patch level, the application was found to have 96.89% accuracy with 90.92% sensitivity and 97.43% specificity; whilst at patient level the accuracy was 78.00% and the sensitivity and specificity were respectively 79.33% and 74.00%. The development of Malaria Screener represents a step towards the potential automation of the diagnostic process in malaria through automation of light microscopy examination.

This may serve as a solution to improve point-of-care diagnosis of malaria in the field in resource-limited settings, through eliminating the need for highly trained personnel. The researchers also integrated additional functions within the app to support the daily work of malaria field workers such as the data management function, allowing them to enter patient information directly into the application database rather than having a separate system.

Other papers looking at automation of diagnostic systems in malaria have also shown promise, and the importance of further research in the area to develop new tools to facilitate rapid and easier diagnosis of malaria in areas with limited access to healthcare and laboratory services cannot be overstated. Another study in 2016 by Luís Rosado and colleagues, based in Portugal, presented a methodology of image processing and analysis methodology using supervised classification to identify P. falciparum in thick smears, using images acquired exclusively using low-cost tools such as smartphones.

Further papers have looked at the use of flow cytometry-based haematology analysers as an important adjuvant diagnostic tool in the routine laboratory work-up of febrile patients in or returning from malaria-endemic regions. Innovative diagnostic methodologies combining low-cost equipment maximising efficacy with algorithms for detection from images such as that used in Malaria Screener show potential for a future of automated malaria diagnostics, alleviating the need in resource-limited settings to train personnel and saving lives otherwise lost due to a dearth of equipment and staff to diagnose malaria rapidly and accurately.

Cathy is 3rd year medical student at Barts and London, who has been passionate about working in Infectious Diseases ever since the age of 16. She is undertaking an MSc at LSHTM during her 'intercalated' year to further explore her interests in Infectious Disease, with hopes to focus on Neglected Tropical Diseases. Cathy is the Founder of the NUIIC, the UK’s first ever undergraduate conference on Infectious Disease, and currently part of the National Committee of Students for Global Health. She is also National Head of Policy at Polygeia, a Global Health think-tank, amongst many other roles.