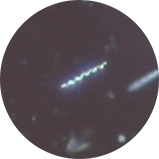 Borellia miyamotoi. From: CDC https://www.cdc.gov/ticks/tickbornediseases/borrelia-miyamotoi.html (use of CDC material does not imply endorsement by CDC, ATSDR, HHS or the US Government).

With the COVID-19 pandemic still raging on, it’s easy to forget that other pathogens, some of them new, also pose a risk to our health. Such singular view would risk losing focus and attention on those other pathogens, with detrimental consequences. Tick-borne pathogens certainly fall into that category, especially those that rarely cause disease, or are hard to diagnose due to their non-specific symptoms.

One of the newer tick-borne pathogens in the United States is Borrelia miyamotoi. It was first described in ticks in Japan, but only recognized as a human pathogen after 46 patients, who suffered high fevers and influenza-like symptoms, tested positive for it in Russia in 2011. Some of these patients had relapsing fevers, and a few of them developed a bulls-eye rash. The first patients in the US were identified in 2013, with cases in New Jersey and Massachusetts. This pathogen can be transmitted by Ixodid ticks that also transmit Borrelia burgdorferi, the causative agent of Lyme disease, such as Ixodes scapularis and Ixodes pacificus. However, many important aspects of the ecology of this tick-borne pathogen are unknown, such as the importance of different mechanism for the maintenance of the pathogen in tick populations, the relative importance of different host reservoirs, and the spatial and temporal patterns of infection risk at different times and locations. In order to elucidate these question, Dr. Felicia Keesing at Bard College and Dr. Richard Ostfeld at the Cary Institute of Ecosystem Studies and their colleagues have studied the disease ecology of this pathogen in Dutchess County, NY, and recently published the results of their study.

First, they collected 3647 questing nymphs of Ixodes scapularis using corduroy tick drags along 400 meter transects at more than 150 sites in 2011 and 2012.  They extracted genomic DNA from these ticks and tested them for Borrelia miyamotoi infection using qPCR. The mean infection prevalence that they found was 1.16%, comparable to previous studies. However, the maximum prevalence they found for an individual site was 9.1%, and 70.6% of the sites did not provide a single tick positive for B. miyamotoi. This suggests that infection risk with this pathogen might be highly variable spatially.

In addition to these sites, they also collected questing ticks for 8 years at a single study site at the Cary Institute, and tested them the same way. The found a similar mean infection prevalence at this site, but no significant increase (or decrease) in prevalence since the introduction of the pathogen in 2008.

One important question in the ecology of this pathogen is the transmission pathway through which ticks become infected. One hypothesis is that Borellia miyamotoi might be transmitted transovarially, from infected mothers to offspring, producing infectious larvae. In order to test this hypothesis, the authors collected questing larval ticks at the Cary Institute of Ecosystem Studies, and tested them for the pathogen in pools of 10. Out of the 216 pools of larvae tested, 8 of those tested positive for this pathogen (0.4%).This is one of the few field estimates of transovarial transmission to larval Ixodes ticks to date.

In order to also investigate the reservoirs of this pathogen, the authors also captured and held potential host animals in Dutchess County at the peak of the larval abundance season. Animals were kept in cages for 3 days, and engorged larval ticks that dropped from the hosts during those 3 days were collected, allowed to molt into nymphs, and tested for the bacterium. Only individual hosts that produced at least 15 larvae that molted into nymphs were included in the analysis. Short-tailed shrews, Virginia opossums, American Robins and Eastern chipmunks all had infection prevalence above 10%, meaning more than 10% of the larval ticks that dropped off of them tested positive for Borrelia miyamotoi after molting into a nymph. White-footed mice, racoons, gray squirrels, American red squirrel, and Wood thrush were also found to have hosted some larval ticks that were later found to be infected with B. miyamotoi. Ticks falling off of some potential hosts, such as the Southern flying squirrel, the gray catbird, the masked shrew, and the Veery, had no evidence of infection with B. miyamotoi.  While this is invaluable information, as the authors note, we don’t know if the larval ticks picked up the pathogen from the host, or if they were already infected with it from transovarial transmission. In order to estimate reservoir competence of these hosts, further studies would be required, using laboratory colonies of Ixodes ticks.

While the fact that 70.6% of the collection sites failed to detect the pathogen may sound re-assuring, this might actually be a result of insufficient number of ticks being tested from individual sites, especially for a rare pathogen. They provide an example that the probability of failing to detect a pathogen from a sample of 20 ticks is as high as 80%, when taken from a population with an overall prevalence of just 1%.

The authors also note that locations with infection prevalence of ticks with B. burgdorferi at similar levels than found for B. miyamotoi in this study, have been associated with substantial levels of Lyme disease in humans in the area. This suggests that human infections with B. miyamotoi are much more common than previously reported, which could be further investigated using antibody assays. They also highlight that Ixodes ticks can be co-infected with B. miyamotoi and other pathogens, such as B. burgdorferi and A. phagocytophilum. Since all of these pathogens initially cause generalized flu-like symptoms, they are frequently misdiagnosed. Fortunately, the same antibiotic treatment is effective against all of these pathogens.

In general, this study by Drs. Keesing and Ostfeld highlights the importance of maintaining vigilance in terms of these new and seemingly rare tick-borne pathogens; the extraordinary amount of work they invested in understanding its prevalence and ecology; and the additional work required to fully answer the many remaining questions. Successfully answering these questions depend on continued funding, underscoring the importance of not completely shifting our focus to COVID-19, despite the urgency and critical importance of responding to the pandemic. Let’s make sure we keep working on everything else as well!