Immediately after this flea attempted to feed 6 days after infection, fresh red blood was present only in the esophagus (white arrows) anterior to the proventriculus (PV). No fresh blood was present in the midgut (MG), which contains only dark-colored remnants of previous blood meals.

The aftermath of a plague outbreak

It is 6am, the workers from Institut Pasteur de Madagascar knock on the door of a traditional house, typical of the Central Highlands of Madagascar. After the usual morning salutation, one of the team members say: “We are here to collect the traps”. They have come to collect the fleas from the candle trap they set in that home bedroom the previous night, as well as some rat traps. The head of the household lets them in to collect the plate containing the fleas and the rat wriggling desperately inside the wire mesh trap.

The curious children from the house exclaim with an incredulous “wow!” when they see the contents of the plate: hundreds of dead fleas, drowned in soapy water. Someone says, “I can’t believe that all of these fleas were in our bedroom!”. The plate is brought carefully into the yard, and one worker starts patiently pulling the fleas one by one with a tweezer and placing them in small vials containing ethanol.

This maneuver always sparks the curiosity of the villagers, and some will eventually ask the reason for such labor. Indeed, a small bubonic plague outbreak happened in that village a few days ago, like in many other remote villages, every year, in this part of Madagascar.

Bubonic plague is a fatal disease which is primarily a rodent infection that can be accidentally transmitted to humans by infected flea bites. Plague is considered by many as a disease from the past, a dark age scourge which took millions of lives during three major pandemics. Although devastating plague pandemics have disappeared from the world, the disease still persists in a few countries and takes hundreds of lives every year. Madagascar has the most declared cases of plague in the world today.

The human flea, a common nuisance

Those fleas, collected with a simple device made of a lit candle in the middle of a plate containing soapy water are the human flea, Pulex irritans. They are rarely caught on rats in Madagascar, but will infest the floor of human habitations. A few weeks later, laboratory results showed that some of those P. irritans from this village were infected with Yersinia pestis, the plague bacterium.

What does a positive Y. pestis PCR result imply? Well, it confirms that plague was circulating in that village. For the inhabitants of the remote villages in the Central Highlands of Madagascar, P. irritans bites are a common nuisance. The insecticide treatment deployed to control the rat fleas, the main vectors of Y. pestis in Madagascar, does not appear to affect P. irritans infestation in homes. Besides, P. irritans is considered a non-vector, thus receiving little attention from policymakers.

Not all flea species are efficient at transmitting the plague bacterium. The ability to develop the plague bacterium biofilm termed “blockage” inside a specific element of the flea gut, called proventriculus (as shown in the photo below) was considered for over a century as an essential condition for efficient transmission.

P. irritans rarely, if ever, develops biofilm-dependent proventricular blockage; and thus, was excluded from the important vector fleas. This fact maintained the debate about its role in plague epidemics.

Thanks to new insights about the flea-borne transmission of Y. pestis, it is now admitted that proventricular blockage is not always required, and fleas can transmit as early as one day after an infectious blood meal. Besides, factors linked to the experimental condition (host physiology, bacteria concentration, temperature, flea maintenance, the strain of Y. pestis, etc.) may influence the outcome of flea vector competence experiments. Therefore, a standardized laboratory protocol to study vector competency is necessary.

The human flea is a poor vector

To bring more insight into this issue, scientists from the Rocky Mountain Laboratory (RML) in Montana (USA) conducted experiments assessing the vector competence of P. irritans. Interestingly, in the USA, the human flea is parasitizing foxes and burrowing owls. Wild-caught fleas were infected and maintained in the laboratory with an artificial feeding system using either human or rat blood containing a known concentration of Y. pestis. The infected fleas were then allowed to feed on sterile blood at different intervals.

After each feeding, the blood on which the fleas were fed upon were spread on Y. pestis culture media and the number of colony-forming units (CFU) was counted to assess the transmission rate. Samples from the infected fleas were also triturated and cultivated to assess the infection rate over time. The results indicated that Y. pestis was able to maintain a chronic infection inside the infected P. irritans gut and a small percentage even developed the proventricular blockage. However, the transmission rate and the number of bacteria transmitted per flea were much lower than for the other flea species maintained with the same condition. More transmission event was recorded from the group of P. irritans fed intermittently on rat blood than on human blood.

It has been demonstrated that blood sources alter the capacity of fleas to transmit Y. pestis, with rat blood enhancing their ability to transmit. Therefore, P. irritans role in plague epidemics or epizootics likely depends on host species selection and availability. The laboratory results substantiate the reputation of P. irritans as a poor and unreliable vector, particularly after feeding on bacteremic human blood.

Those laboratory experiments were conducted on P. irritans collected from foxes and burrowing owls, which are not directly implicated in the plague transmission cycle in the USA. It would be interesting to conduct the same experiments with P. irritans collected in plague endemic countries such as Madagascar. It is not uncommon within pathogen vectors for different strains of the same species to have variable vector competence, and the importance of assessing the response of different flea strains of the same species to Y. pestis infection has been noted.

Besides, one possibility is that P. irritans infected by feeding on a rodent dying of plague could subsequently transmit Y. pestis to a human. In plague endemic regions where rats are in close contact with humans constantly bitten by P. irritans, the risk of plague transmission might be even higher.

Currently, researchers from Emory University (USA) and Institut Pasteur de Madagascar are collaborating to investigate the relevant ecological and behavioral traits of P. irritans that relate to their potential role in the plague epidemic in Madagascar. Entomological works about the vectors are scarce in Madagascar and the importance of P. irritans as a vector has never been investigated.

The abundance of P. irritans in plague endemic regions could compensate for a potential poor vector ability and might increase the plague risk for the inhabitants. Therefore, it is essential to determine if P. irritans relative abundance in the human habitation is among the factors characterizing high plague risk areas. Laboratory works have been planned to investigate P. irritans host preference and vectorial capacity. This time, flea strains from human habitation will be used for infection and transmission tests. The long-term goal of this collaborative research is to identify the relevant factors contributing to the emergence and the persistence of the human plague epidemic in Madagascar, to implement more adapted control strategies. 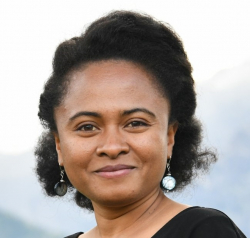