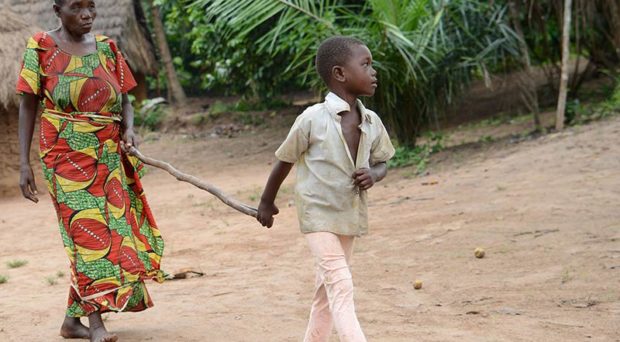 A woman who is blind due to river blindness is led by her grandchild. – Democratic Republic of Congo © CBM

As Bug Bitten reported recently, January saw the first ever World Neglected Tropical Diseases Day – a sign of just how far those working to control and eliminate neglected tropical diseases have come since the 2012 London Declaration on NTDs saw key players from across the world commit to tackling these ancient diseases.

At Sightsavers I provide technical advice to Ministries of Health and local partners working to control and eventually eliminate river blindness (also known as onchocerciasis). The progress I have witnessed is a clear example of the impact the intensified efforts on NTDs are having.

River blindness is a parasitic infection spread by river-based flies. It causes severe skin irritation and can lead to irreversible blindness; yet it’s entirely preventable and treatable. If people who have the infection get timely access to the right medicine (called Mectizan®) there will be no lasting impact on their skin or eyesight. If those who are at risk of infection take the drug one or two times a year over a prolonged period, they will also be protected.

River blindness treatment now reaches record-breaking numbers, with 151.8 million people treated globally in 2018. One out of every four people who receive river blindness treatment do so through a Sightsavers-supported programme, and I have seen close-up the colossal, collaborative effort that is required to deliver treatment on such a huge scale. The right mechanisms now exist to ensure mass drug administration is successful, making the elimination of river blindness as a public health threat entirely feasible.

Progress is certainly impressive, but how did we get here?

The first steps to conquer river blindness were taken more than 20 years ago. In 1987, pharmaceutical company Merck & Co committed to donating river blindness treatment across the world for as long as it takes to eliminate the disease, through something that would eventually be known as the Mectizan® Donation Programme.

Sightsavers, alongside national governments and other NGO partners, participated in multi-country research to develop the best method for providing treatment to communities on mass over a number of years. This resulted in something called the CDTi approach, which now forms the bedrock of river blindness control and elimination work.

CDTi stands for ‘community-directed treatment with ivermectin’ (another name for Mectizan®) and it has been successful because it enables at-risk communities to distribute treatment at a time, using a method best suited to their circumstances. The CDTi approach works because it puts people in control of their own health, enabling those from at-risk communities to be instrumental in distributing and monitoring treatment. Because communities have ownership of the process, treatment distribution is more likely to continue and be effective, enabling progress to be sustained.

As the CDTi approach began to take off it became apparent there was a need to ensure mass drug administrations were well coordinated and best practice shared. That’s why, in 1991, the NGDO Coordination Group for the Control of Onchocerciasis was established to assist national programmes. Sightsavers was a founding member, and it was a proud day in 2013 when the group’s name was changed – the word ‘control’ replaced with ‘elimination’ –, indicating just how far efforts have come in the 20 years since its inception.

In 2013, Colombia became the first country to be declared free of river blindness by the World Health Organization, followed by Ecuador in 2014, Mexico in 2015, and Guatemala in 2016.

Other countries are making important progress. Nigeria is home to around one quarter of all those at-risk of river blindness, and last year the government there announced the disease had been eliminated from Kaduna, Nassarawa and Plateau states, where 4.2 million people had previously been vulnerable.

Thanks to the high level of treatment coverage, it is has also become incredibly rare for new cases of vision loss caused by river blindness to occur.

A lot has been achieved in the last few decades, but more remains to be done. Currently, at least 217.5 million people are still at risk of contracting river blindness – that’s more than three times the population of the UK.

In 2019, WHO highlighted several priority areas that, if addressed, will help speed up elimination in countries where the disease remains endemic. One key area is to ensure all those in need of treatment are receiving it. To this end, we are supporting river blindness elimination mapping, working with partners in Ghana, Nigeria and Mozambique to determine whether areas that have not been offered treatment so far would benefit from it.

By responding to challenges such as these, and always working in partnership, the effort to reach more people with river blindness treatment will continue until all those affected have access to it. Louise Hamill is a Senior NTD Technical Advisor at Sightsavers who specialises in onchocerciasis and lymphatic filariasis. She has more than 10 years experience in NTD research and implementation. She holds a B.Sc. and Ph.D. from the University of Edinburgh and is the current Vice Chair of the NGDO Group for Onchocerciasis Elimination.