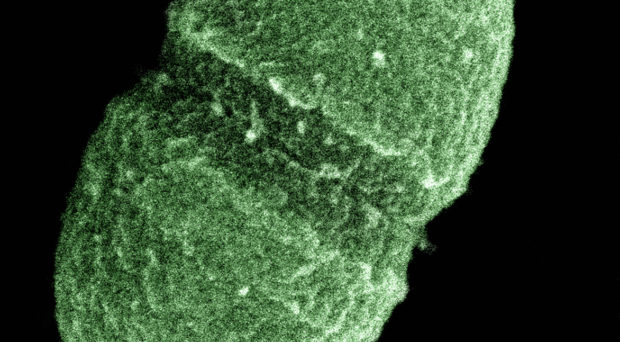 Enterococcus faecalis a bacterial parasite of nematodes that will actively protect its host when another bacterium enters.

Our relationship with parasites has always been tenuous. The very nature of the word parasite portrays this as an organism that lives on or within a host and exploits this host to live. However, we are now beginning to recognize a different picture of ourselves and the thousands of organisms that live on and in us. Increasingly it is becoming obvious that our bodies are best viewed as ecosystems that house a large number of interacting organisms, like any natural environment.

These organisms interact with us, their habitat, and each other. When viewed in this light it becomes obvious that our relationship with parasites is not so black and white. In fact, the way in which the species living within us interact with each other largely determines the outcome of their effects on us, the ecosystem.

Co-infection is common and microbes interact

The recent advances in microbiome research have really highlighted how competition between different species of bacteria within our bodies can turn a species from harmless symbiont into pathogen, wreaking major havoc in our guts; all dependent on the neighbours occupying the same space.

Studies of co-infection with multiple known disease-causing agents, or parasites, are not entirely new either. However, they have largely focused on the evolution of virulence, meaning how quickly or badly pathogens harm and/or kill their host. In reality though, the outcomes of co-infection can often lead to a reduction in virulence, or even have a protective effect for the host. Nature is ripe with examples of both, providing evidence that interactions between parasites within host bodies can lead to different outcomes. This evidence has left biologist attempting to catch-up and try to understand the theory governing which outcome will evolve from sustained co-infection with multiple groups of parasites.

Modelling simulates the interactions of microbes

The best tools at the disposal of researchers attempting to untangle the web of factors involved in these interactions are mathematical models and simulations. Models allow researchers to simplify the interactions and factors involved in a scenario and simulate thousands of generations of interactions at once. The majority of this work has focused on the evolution of virulence in co-infection scenarios. What has emerged from this research are some very robust general theories predicting whether co-infecting parasites will drive each other towards greater virulence or not.

In general, research has shown that if two co-infecting pathogens are distantly related, then they will drive each other to become more virulent, and vice-versa. The logic behind this being that low relatedness leads to competition for the limited space, or resources available within a host. This causes a race to most quickly and efficiently exploit the host; a situation known as exploitative competition. There are, however, vast arrays of ways in which parasites may interact within a host. Two highly related parasites may in fact work so well together that they encourage each-others growth, resulting in higher virulence for example. What is often not considered though is what conditions might drive a parasite species to become less harmful and even to begin protecting its host in the face of another.

Parasites will protect their hosts

Although it seems counterintuitive for a parasite to actually protect a host, the situation does occur in nature. A study published last year in the journal Nature showed that a mildly pathogenic bacterium (Enterococcus faecalis) will rapidly evolve to protect its nematode host (Caenorhabditis elegans) when co-infected with a more virulent bacteria (Staphylococcus aureus). It appears the old adage of “the enemy of my enemy is my friend” holds true for parasites that need to keep their host alive, or risk perishing themselves.

In an effort to fill in some of the theoretical gaps in the evolution of host protection, researchers from the University of Bath and Oxford developed a modelling approach to simulate parasite interactions that may lead to host protection and this work was published last month in Evolution Letters.

The other required parameters of the model are that hosts die-off naturally and reproduce at set rates and hosts can recover from infection but do not become immune to re-infection. When hosts are infected by a single parasite they will have a set mortality rate (virulence) that will increase when they become infected with both parasites and, finally, a parasite can protect their hosts at a cost to its transmission rate or an increase in virulence. This simulated environment is a balance of simplicity and biological reality that allows the researchers to see what parameters produce scenarios where host protection evolves.

Without wading too far into the complex maths of the modelling, some interesting conclusions were drawn from the results. Both types of protection, resistance and tolerance, evolved from a wide array of trade-offs and it is the nature of the trade-off that changed the outcome.

First, in general, the cost of protection needed to be low and whether the trade-off was accelerated or decelerated led to the different forms of protection evolving. Secondly, they found that longer host lifespans and lower virulence level caused by the protecting parasite led to an increase in the range of conditions resulting in both resistance and tolerance. This finding in particular, backs up the empirical findings of the bacteria / nematode system mentioned above.

Most importantly, this study is one of the few to attempt to provide answers as to how, when and why host protection might evolve. Building on this study will help us to understand the forces behind this seemingly contradictory phenomenon we observed in nature. Understanding when parasites may switch sides between causing tolerance or resistance too could enhance our ability to treat and diagnose disease. In nature, as is true in life, motivations can change and no relationship remains the same over time.