BMC Cancer:  Breaking silence: a survey of barriers to goals of care discussions from the perspective of oncology practitioners 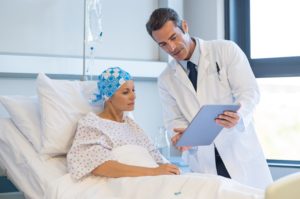 For patients with advanced or terminal cancer, decisions such as whether to be resuscitated or where to receive care at the end of life have a large impact on their quality of life, the cost of their care, and wellbeing of their families. Discussions between patients and clinicians to decide on goals of care can lead to fewer unwanted interventions, better patient outcomes, and lower costs, but few clinicians initiate or encourage these discussions.

The barriers that prevent clinicians from having goals of care discussions have not been studied, so the authors of this paper conducted a survey among physicians and nurses at one hospital. The survey asked oncology clinicians to rate the importance of possible barriers to goals of care discussions. Barriers related to the patient and their family, such as the patient (or a family member) not accepting a poor prognosis or lack of patient capacity to make decisions, rated as the highest barriers. Among other categories of barriers, lack of time also received a high rating.

The importance of the identified barriers highlights the need for specialized training for oncology clinicians to have goals of care discussions with patients who may need support to make decisions throughout the course of illness.

BMC Chemical Engineering:  Chemical engineering role in the use of renewable energy and alternative carbon sources in chemical production

BMC Chemical Engineering, one of the newest journals in the BMC series, has recently begun publishing articles, including an important new review on the use of renewable energy in the chemical industry. In this review, Gabriele Centi and colleagues discuss changes within the chemistry and engineering industries brought about by the ongoing transition away from fossil fuels.  They focus on the development of alternative carbon sources and the integration of renewable energy into chemical production. This review highlights the need for innovation to drive radical change in chemical production, assessment, and applied chemical engineering approaches. Lifestyle diseases such as diabetes and heart disease have become increasingly common globally despite recommendations for lifestyle changes to prevent these diseases. The lifestyle habits that affect the later development of these diseases are formed in early adulthood. A focus on prevention is needed in this population, but few studies have examined the association of specific lifestyle habits and disease risk factors in young adults.

The authors of this paper on Swedish young adults, ages 18-26, studied adherence to dietary recommendations and associations with metabolic risk markers such as insulin resistance and body fat. They found that more than half of the participants ate more sweets than recommended while approximately 85% ate less fruits and vegetables and 90% ate less whole grain or fish/seafood than recommended.

When they studied the association between meeting each dietary recommendation and specific risk markers, they found that eating the recommended amount of fruits and vegetables was associated with lower body fat in all participants. A similar association was seen in women eating the recommended amount of fish/seafood. They also saw lower insulin resistance in all participants meeting recommendations for fish/seafood, fruits and vegetables, and sweets. These results highlight the importance of helping young adults bring their dietary habits closer to recommendations in order to prevent diabetes and other diseases later in life.

BMC Health Services Research:  What is the financial incentive to immigrate? An analysis of salary disparities between health workers working in the Caribbean and popular destination countries

To build an accurate picture of the increased salaries of health workers in high-income countries, the authors of this study used purchasing power parity (PPP) to compare salaries for nurses, doctors and specialists in the US, the UK, and Canada to those in four Caribbean countries. PPP exchange rates provide a more realistic comparison of salaries between countries by equalizing the cost of living between those countries.

Hospital-acquired infections are a serious risk, especially for vulnerable patients. Medical staff need to be aware of the risk and know how to minimize them, but time for practical lessons is limited in nursing school curricula.

The authors of this paper sought to demonstrate the importance of hand hygiene to nursing students by adding two short practical sessions, totaling three hours, to a basic microbiology course at their institution. During the first session, the students touched bacterial culture plates to leave a sample of the bacteria normally found on their hands. In the second session, seven days later, the students examined the bacterial colonies that had grown on the culture plates, noting the number and characteristics of the bacterial colonies.

In order to measure the impact of this practical demonstration, the students were asked to fill out questionnaires before and after the pair of sessions testing their awareness of surfaces that could carry bacteria and actions that could facilitate infection. Awareness scores increased after the sessions, showing that a brief, simple addition to nursing school curricula could improve nursing students’ awareness of infection risk.

Tovah is a Senior Editor for BMC Pregnancy and Childbirth and BMC Women's Health and has been working on the BMC series since 2016. Before moving into publishing, Tovah received her Ph.D. from Johns Hopkins University, USA, where she studied calcium signaling in yeast, developing a novel microscopy probe for real-time measurement of calcineurin activity. Tovah's path to scientific publishing started with an early fascination with Punnett squares and a focus on genetics, which then broadened into an interest in the communication and application of scientific research across disciplines. Along with working on her journals, Tovah enjoys interacting with the research community through seminars and workshops related to scientific publishing.