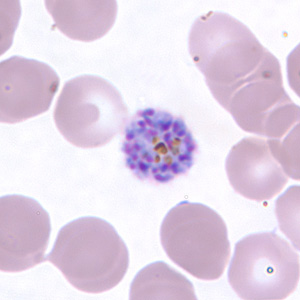 One of the features most commonly associated with malaria is recurring episodes of disease, months or years after the infection, yet not all species of the malaria parasite that infect humans cause these relapses. The majority of cases of relapsing malaria are caused by Plasmodium vivax. This is one of several ways in which vivax malaria differs from the disease caused by the much deadlier species, Plasmodium falciparum.

This recurrence of symptoms occurs because some of the parasites can stay dormant within liver cells for long periods; a strategy that prolongs the parasite’s life cycle if there are no mosquitoes around to transmit it to another person. This, plus its ability to multiply in mosquitoes at lower temperatures than P. falciparum, enables its distribution to stretch to temperate climes. Vivax malaria accounts for 65% of the malaria cases in Asia and South America but it is absent from most of the African continent.

Another major difference between P. vivax and P. falciparum concerns the type of red blood cell that the parasite invades. The stage of the parasite that undergoes this invasion is the merozoite.

Invasion is a multistage process, initiated by recognition of, and attachment to, the red blood cell membrane. This is followed by orientation and the formation of a tight junction between parasite and host membranes before invasion.

Rather than using mature red blood cells, vivax merozoites preferentially invade immature red blood cells, known as reticulocytes. Attachment to the reticulocyte surface occurs via one of its surface proteins known as the Duffy antigen (DARC) , a receptor for several chemokines. Most of the indigenous African population carry a silent allele for this gene and do not express DARC, thus protecting their reticulocytes from invasion by P. vivax and explaining the absence of vivax malaria on the continent.

Merozoites produce a molecule that binds to DARC called Duffy binding protein. It is located at the apical pole of the merozoite in organelles called micronemes and released just prior to the binding of the merozoite to the reticulocyte surface. Duffy-binding protein has been highlighted as a possible vaccine target as antibodies directed against it could block reticulocyte invasion.

Two observations suggested the DARC / Duffy binding protein interaction is not the only one involved in the binding of merozoites to reticulocytes as some DARC-negative people are infected with P. vivax and DARC is also present on the surface of mature red blood cells, yet these are not invaded by P. vivax. Additional receptor / ligand interactions were thought to be involved.

As their name suggests, a family of proteins called the P. vivax reticulocyte-binding protein family (PvRBP) have also been shown to be involved in the binding of merozoites to reticulocytes, but the receptor that they bind to had not, until recently, been identified.

Identification of an additional receptor/ligand system

Transferrin receptor 1 (TfR1) is a surface protein involved in the uptake of iron into red blood cells by acting as a receptor for iron-loaded transferrin. It is present on the surface of reticulocytes but is lost as they mature. P. vivax preferentially invades reticulocytes that express high levels of this receptor. One of the reticulocyte binding protein family, PvRBP2b, had been shown to preferentially bind to reticulocyte expressing TfR1.

A multinational group of researchers have confirmed the nature and importance of the TfR1/PvRBP2b receptor/ligand in the invasion of reticulocytes and their findings have recently been published in Science.

Initially, they showed that the binding of recombinant PvRBP2b to reticulocytes was abolished if the TfR1 receptor was removed from the surface of reticulocytes using enzymes, or if anti-TfR1 monoclonal antibodies were used to block the receptor site. Furthermore, immunoprecipitation experiments showed that binding of PvRBP2b to TfR1 is direct and specific; other members of the P. vivax reticulate binding protein family did not form a complex with it.

Using competitive binding assays the researchers demonstrated that the apical domain of TfR1 was the binding site for PvRBP2b. Furthermore, using recombinant TfR1 lacking a single glycine on the lateral surface of the terminal domain, the importance of this amino acid to the binding site was demonstrated as the ability of PvRBP2b to bind to this recombinant was completely abolished.

The importance of the N-terminal domain of PfRBP2b for binding to the receptor TfR1 was established using recombinant fragments of the molecule. However, structural analysis combined with functional studies revealed that the C-terminal fragment was also required to form a functional binding site. Monoclonal antibodies raised against 3 epitopes in the N-terminal domain inhibited binding of PvRBP2b to TfR1.

In addition to assays investigating the binding of ligand to receptor molecules, the investigators performed experiments to determine whether this binding was involved in the process of invasion of the reticulocytes. Mutant clones of jkRBCs expressing lower surface levels of TfR1 were generated and P. vivax and P. falciparum merozoites incubated with them. A 10-fold reduction in invasion of P. vivax occurred in the mutant cells, establishing the importance of the transferrin receptor TfR1 in the invasion process. In contrast, invasion by P. falciparum was not affected by the reduction in available TfR1.

Finally, when the monoclonal antibodies raised against the 3 epitopes of the N-terminal domain of PvRBP2b were added to P. vivax isolates from Brazil and Thailand, they inhibited invasion of erythrocytes.

Thus, no invasion occurred if TfR1 was unavailable or if essential epitopes on the PvRBP2b molecule were blocked.

This comprehensive study has elegantly revealed the essential role of an additional element in the process of invasion of erythrocytes by P. vivax merozoites. The authors of this paper propose that PvRBP2b/TR1 binding is important for the initial recognition of an erythrocyte and commitment to invasion. It is then followed by the interaction between PvDBP and the DARC receptor, tight junction formation and invasion.

The identification of the importance of this second receptor / ligand interaction highlights the possibility that further molecular interaction may be involved and identifies more putative vaccine targets.