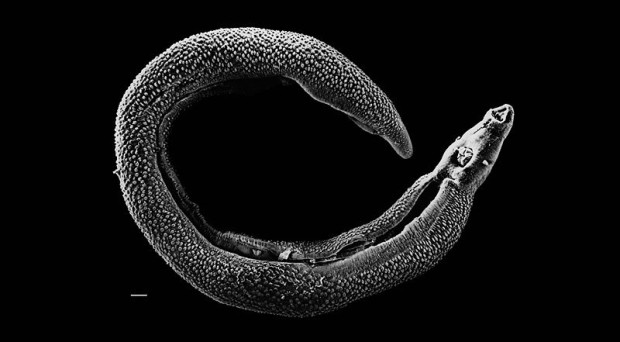 The risk of infection by parasites is often influenced by a number of ecological factors. Think about malaria. If the correct environment for the mosquito required to transmit malaria is not present the chance of getting bitten by a malaria carrying mosquito is minimal. A suitable environment for the host that transmits a parasite is therefore essential for the completion of its life cycle and alterations to the environment will either reduce or increase infection risks to hosts in the area. For one particularly harmful group of parasites, Schistosomes, a key factor in transmission is a nice, calm body of freshwater full of snails.

Schistosomiasis, the disease caused by three major Schistosome species of trematodes, affects 200 million people worldwide and causes a range of symptoms such as chronic anemia, fatigue, stunted growth and cognitive impairment. It ranks as one of the most debilitating diseases worldwide. Schistosomes are transmitted by infected snails that release cercaria (tiny swimming parasite larva) into freshwater that find and penetrate the skin of humans who frequent the water.

This parasite benefits from man-made alterations to environments like dams that create large bodies of water suitable for the snail hosts. Could then the opposite be true, and transmission reduced via some other environmental modification? One strategy to combat this disease would be to reduce snail populations in endemic areas. The draw back being that this is usually achieved using harmful poisons or the need to drain large areas of standing water. Fortunately one group of researchers are exploring a seemingly obvious and naturally occurring alternative, predation.

What would be needed is an aquatic predator that loves to feast on snails. Even better would be one that prefers infected snails. Scott Swartz of the University of Stanford may have found just such a predator, the prawn Macrobrachium vollenhovenii. Swartz and his collaborators designed a series of experiments to test whether this natural snail predator actually does prefer to dine on infected vs. uninfected snails and he results were positive.

Four behavioural experiments were run to test predation if and why prawns may consume infected snails more.

The first two experiments were predation experiments with both infected and uninfected snails housed in aquariums with a prawn. In one experiment any consumed snails were replaced at observation during the 2 day trial. The positions of the snails were recorded at each observation point as well as could be as follows: out of the water, under the substrate (strip of vinyl), on the lettuce (provided as food for snails), on the bulkhead of the drain or out in the open. The second predation experiment used the same set up but snails were not replaced and trials lasted 24 hours with observations of position also being made throughout.

A third experiment tested movement of infected vs uninfected in small trays. Snails were lined up at one end with food placed at the other. The number of snails moving and the distance moved was observed every 30mins for 6-10 hours. Finally, responses to predator/predator cues were tested in the aquariums. Six infected or uninfected snails were placed in tanks with a caged prawn and crushed snails added at time 0 and 7 hours. Positions of the snails were then recorded for 12 hours. The same observations were made of the snails on a control day in which the crushed snails and caged prawns were not added.

These results than beg the question; are infected snails more vulnerable because they are handicapped by the parasite or is their behaviour changing at the behest of the parasite? It would seem unlikely that the parasite would change the behaviour of the snail in a way that makes it vulnerable to predation as, in this case, being eaten ends the parasites life too. However, as the authors hypothesise, a trade-off between times spent hiding from prawns vs. time spent in the open, where transmission is maximised, may exist. In order to test this further experiments are needed but this understanding of the exact mechanism behind the preferential consumption of snails by predators may help maximise the use of predation as a tool against parasites.

Personally I am always wary of introducing species into new environments for biological control because there are often unintended consequences to this type of modification. They may not eat what you intended, or they dangerously out-compete native species.

There are a number of examples of prawns actively reducing the incidence of Schistosomiasis and similar strategies of interrupting a parasite’s life cycle, rather than treatment with drugs, has been known to work before. For instance, Guinea worm is on the verge of eradication, due largely to the distribution and use of filtered drinking straws that prevent the infective stages of parasites from being consumed. In this vein perhaps we are overlooking some more obvious solutions to the Schistosome problem though. Snails become infected when humans with the disease urinate or defecate eggs into water, meaning improved sanitation in affected communities would likely greatly reduce infection levels as well. For a number of reasons improving standards of living in impoverished areas should be the goal in preference to mass rearing and release of prawns around the world. Save the prawns for the barbeque instead.