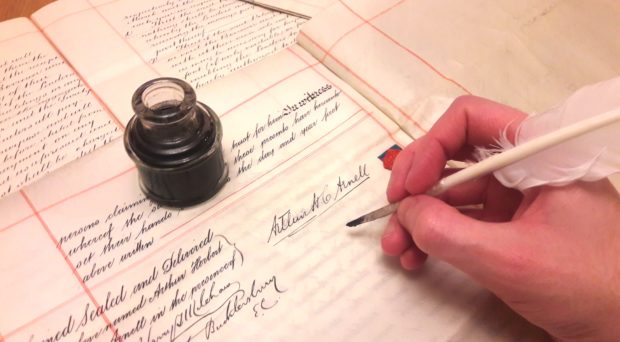 Historic legal documents are one of the most abundant resources in British archives, but also one of the most neglected. Despite the millions that survive, we know remarkably little about their production.

Uncertainty even remains over the animal species used, with deeds frequently cataloged as ‘vellum’ (etymologically meaning calfskin), ‘parchment’ (typically reserved for sheep or goatskin), or even more generally as ‘animal membrane’.

Determining the species used can be challenging. Skins have previously been identified based on subjective interpretation of their size, thickness, color, and follicle patterns, which often leads to misidentification.

In contrast, peptide mass fingerprinting can now offer absolute determination of species, and is revolutionizing the study of old manuscripts.

The preferential use of sheepskin may lie in efforts to deter fraudulent changes to legal agreements after they had been signed due to the visibility of text erasure afforded by its unique structure.

Parchment is made from the dermis, a layer of the skin divided into the upper papillary dermis and lower reticular dermis. Their connection is weak in sheepskin due to the abrupt change in structure and the large quantity of fat which forms between them.

During parchment production the skin is submerged in an alkaline solution which draws out this fat, leaving voids between the two layers.

Consequently, if the surface is scraped in an effort to remove text, there is a risk that they detach (known as ‘delamination’) leaving a large blemish on the surface.

Cutaneous fat accounts for as much as 30–50% of the dry weight of sheepskin, compared to just 2–3% in cattle and 3–10% in goatskin, resulting in a far higher risk of delamination.

The visibility of textual manipulation offered by sheepskin parchment was noted in the 12th century Dialogus de Scaccario—attributed to the Lord Treasurer Richard FitzNeal—that “they do not easily yield to erasure without the blemish being apparent”.

Later in the 17th century, Sir Edward Coke—Lord Chief Justice of the King’s bench—again noted the necessity of writing deeds on durable material such as parchment “for the writing on these is least liable to alterations or corruption”.

While the visibility of textual erasure favored the use of sheepskin parchment, the continuation of this tradition until the late-19th century was likely influenced by their greater availability and lower cost.

Sheep of any age can be used for parchment, but only those from calves younger than around 6 weeks old can be used for vellum due to the increasing thickness of their skin, with the result that only a few hundred thousand were likely available annually.

In contrast, the UK was home to more sheep than humans until the Victorian era.

The limited supply of calfskin meant that vellum was more than double the price of sheepskin parchment, and was often reserved for special documents such as record copies of Acts of Parliament.

The use of parchment over paper, may have been due to a perception that it would also be more durable, matching the intended durability of the agreement written on them. Sean Paul Doherty is an archaeological scientist exploring human-animal-environment interactions through the synthesis of zooarchaeological, biomolecular and historical and evidence. He is currently a Research Fellow at the University of Exeter.