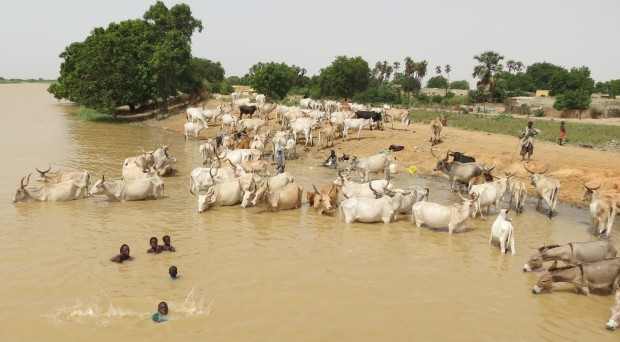 Schistosomiasis is a debilitating and largely hidden parasitic disease, one of the Neglected Tropical Diseases WHO has targeted for elimination by 2030. This blood-dwelling parasitic worm is thought of as both a water-borne and vector-borne disease: transmission occurs in water where the aquatic snail intermediate host lives and amplifies the parasitic worm. It is a complex life cycle but a hugely successful one, with over 200 million people affected worldwide. If left untreated the consequences of having schistosomiasis can be painful, stigmatizing, and dangerous. Intestinal schistosomiasis can lead to liver failure, and urogenital schistosomiasis can lead to bladder cancer, genital lesions with increased risk of HIV and infertility. Schistosomiasis is also a disease of veterinary importance, the morbidity in livestock can be severe and lead to loss of meat, milk and breeding opportunities.

Both human and livestock schistosomiasis can lead to loss of earnings and reduced productivity. A One Health approach is needed to understand the true socio-economic impact of schistosomiasis and to help design multi-sector coordinated elimination efforts. And the benefits could be significant.

A report published by the Economist Intelligence Unit and The End Fund found that the economic gains made from eliminating morbidity and mortality due to human schistosomiasis and soil-transmitted helminthiasis (STHs) in Ethiopia, Kenya, Rwanda and Zimbabwe by 2030 could boost these countries’ GDP by US$5.1bn in purchasing power parity (PPP) by 2040. It also reported that eliminating the ill health associated with human schistosomiasis and STHs in school-age children in these countries could improve their ability to learn and attend school. Their estimates suggest that this could potentially benefit these children by US$1.2bn (PPP) in extra wages between 2021 and 2040 once they enter the workforce.

Human schistosomiasis needs to be considered when water resource and economic development projects are designed, such as large-scale irrigation projects to increase food security and agricultural productivity. If these projects underestimate the risk of schistosomiasis their investments can backfire leading to outbreaks of schistosomiasis, with farmers near these projects experiencing a loss of productivity instead of the desired increased economic benefit. This was recently highlighted in a publication by Rinaldo et al 2021 looking at the economic impact of schistosomiasis in Burkina Faso, where researchers showed that economic returns from water resource development projects were substantially reduced once the health effects of schistosomiasis are taken into account: villages near large-scale dams suffer an average yield loss of around 20%. In addition, the authors found that eliminating schistosomiasis in Burkina Faso would increase average crop yields by around 7%, rising to 32% for high infection clusters. Read the author’s blog here to find out more about this study.

Recently a study by Adeyemo et al 2022 assessed the financial impact of livestock schistosomiasis to farmers in Senegal and developed a baseline of the losses and expenditures due to schistosomiasis in subsistence and transhumance farming. The authors report that schistosomiasis in livestock is a known problem for farmers in the 12 villages studied, with farmers describing clinical signs of potential schistosomiasis infections in their herd, such as weight loss, hollowing around the eye and diarrhoea. Farmers reported that they would seek local veterinary advice, some saying they have treated for schistosomiasis. The authors modelled two scenarios; scenario one, where farmers test and treat their livestock for schistosomiasis and scenario two where there are no test or treatment options. The models showed that in scenario two the cost to farmers was substantial, reducing the farmer’s livelihood and potentially leading to a situation where basic needs cannot be met.

Schistosomiasis is caused by a number of species of schistosome parasites, infecting different animal hosts including humans. Some of these schistosomes are incredibly adept at infecting multiple species, such as S. japonicum which can infect over 40 mammalian hosts, and others have the ability to infect different hosts to form zoonotic hybrids, e.g. between cattle and human schistosomes, S. bovis – S. haematobium respectively, as highlighted in this blog. In communities where livestock and humans live closely and frequent the same water sources, zoonotic schistosomiasis is a significant challenge to human schistosomiasis elimination efforts. In addition, water development projects that do not sufficiently mitigate against schistosomiasis could lead to an outbreak or increase of this debilitating disease in the very populations they aim to support, leading to a reduction in economic returns of the projects & investments, as well as increasing the burden on communities and Ministries of Health who have to then spend already limited resources to address schistosomiasis infections.

Schistosomiasis affects human health, agricultural production, work productivity and educational outcomes. The ability of some species to form hybrids and expand host species ranges means there are zoonotic implications for this disease, but also that a holistic approach including interventions targeting livestock schistosomiasis could have beneficial spill over effects for human health. The authors in Adeyemo et al 2022 also highlight that with the lack of test & treat for livestock and the potential availability of donated praziquantel for humans, may lead farming families to opt to treat their herd and protect their food & income, rather than their own health. Apart from the health implications, this also increases the risk of parasite resistance to the only known drug effective against all schistosome species. A One Health and multi-sector coordinated approach could address all these aspects, benefiting communities by protecting human and animal health, safeguarding water development investments, and increasing productivity and economic development.

So what is the true economic impact of schistosomiasis? Only a One Health approach can answer this question.