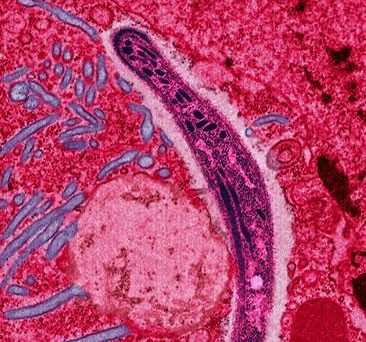 Malaria is one of the oldest diseases humans suffer and die from. Despite past and ongoing efforts to control and reduce the mortality and morbidity due to this disease, 229 million people were estimated by the WHO to be infected, and 409,000 people have died from it, just in 2019. 274,000 of those were children under the age of 5.

Unfortunately, the Plasmodium parasite responsible for causing malaria is not as easy target for vaccine development as many other pathogens, such as the SARS-cov-2 that has caused the COVID-19 pandemic. First, it is a eukaryote unicellular protozoan, much more complicated than a simple virus, with more than 5000 genes. Second, it is well known for it’s ability to suppress and modulate the immune response, and actively generates variants of surface proteins that evade antibody response. Finally, it has a complex life cycle, with five different stages or forms in the human blood and liver, some within and some outside of red blood cells (erythrocytes). Therefore, it is difficult to develop a vaccine that can target all different forms of the pathogen. If we want to prevent the infection of liver cells right as the pathogen enters the body, we have to target the sporozoite stage that the Anopheles mosquito vectors inject into us with their saliva.

Vaccination using dead or attenuated forms of the pathogen have been attempted in the past, with limited success. An additional challenge is that infection with Plasmodium only elicits partial immunity, not a sterilizing immune response. Acquired immunity is short-lived, and protection can be lost within a year.

Despite these challenges, vaccine development has been pursued by several pharmaceutical companies, research groups, non-profit organizations, and public entities, demonstrating the importance of this endeavor. The WHO published an updated Malaria Vaccine Technology Roadmap in 2013, which called for the development of several vaccine candidates, with the aim of achieving 75% vaccine efficacy. There are 27 different vaccine candidates currently at various stages of vaccine development, and we have reported on some of those here at Bugbitten previously.

The one that advanced most quickly through clinical trials is the RTS,S/AS01 (Mosquirix) vaccine, developed by GlaxoSmithKline, in collaboration with the Malaria Vaccine Initiative and many others. It is a recombinant protein-based vaccine, containing antigens from the repeat and T-cell epitope of circumsporozoite protein (CSP) of Plasmodium, fused to the hepatitis B surface antigen (HBsAg), which self-assemble into virus-like particles (VLPs) in yeast. Importantly, RST,S/AS01 contains only 20% of fusion protein moieties (larger molecules), while 80% of HBsAg are expressed as monomers, limiting how much CSP gets on the surface of the virus-like particle. This might explain why, after very promising results in Phase II trials, the subsequent Phase III trials demonstrated only modest protection against infection, with vaccine efficacy of 36.3% in children aged 5-17 months. In addition, there were possible safety signals raised due to increased incidence of meningitis, cerebral malaria, and increased female mortality in the malaria vaccine group. While the European Medicines Agency (EMA) provided a positive scientific opinion, the RTS,S/AS01 vaccine has not yet been prequalified for use by the WHO. Instead, in 2019 a Malaria Vaccine Implementation Programme was launched, to further study the risks and benefits of this vaccine.

Now, a recent not-yet-peer-reviewed study by researchers at the University of Oxford, the London School of Hygiene and Tropical Medicine, the pharmaceutical company Novavax, the Serum Institute of India, and the Institute de Recherche en Sciences de la Sante in Burkina Faso, report on the promising results of a phase II trial with an alternate vaccine. The new vaccine, R21, is very similar to RTS,S/AS01, in that it still contains the central repeat and the C-terminus of the circumsporozoite protein (CSP) fused to the N-terminal end of HBsAg. However, in contrast with RTS,S/AS01, it does not contain the HBsAg in monomer form, only as fusion protein moieties, providing more surface for the CSP on the virus-like particle, making for a more specific immune response. In addition, R21 is mixed with a different, saponin-based adjuvant called Matrix-M, produced by Novavax. The vaccines used in the trial were produced at the Serum Institute of India, the world largest vaccine producer. The trial was conducted in Burkina Faso, on 450 children aged 5-17 months, in 2019-2020, with three doses of primary vaccination, followed by a booster shot 12 months after their third dose. There were three groups in this double-blind, randomized clinical trial, with two groups receiving the vaccine with 25 and 50 µgrams of the adjuvant, and a control group who received a rabies shot. Participants were followed for 12 months and assessed for malaria infection and adverse events.

These proportions translated into 71% and 75% vaccine…

After 6 months, only 43 and 38 out of 146 participants in the vaccine groups reported malaria infection, while 104 out of 147 children in the control group reported malaria infection. After 12 months, there were only 7, 1 and 1 additional cases reported in each group, respectively. These proportions translated into 71% and 75% vaccine efficacy in the groups with the two different doses of adjuvants, meeting the recommendations of the Malaria Vaccine Technology Roadmap. The safety profile of the vaccine was excellent, with only seven serious adverse events reported, all deemed unrelated to vaccination. Both groups of vaccinated children developed large antibody titers, which dropped over the following 12 months. Importantly, antibody levels were boosted by the fourth vaccination to levels similar to those after the third vaccination, which was not the case for the RTS,S/AS01 vaccine.

These exciting results provide a hope that we finally might have a highly efficacious and safe malaria vaccine that could save the lives of countless children in Africa and elsewhere. The authors note that the new R21 vaccine would also be cheaper and easier to manufacture at a large scale, given the smaller dose of the vaccine compared to RTS,S/AS01, and the reduced complexity of the Matrix-M adjuvant relative to the AS01 adjuvant.

However, there is still more work to be done…

However, there is still more work to be done. The location of this current trial in Burkina Faso is characterized by seasonal malaria transmission for 6 months of the year, explaining the low numbers of additional malaria cases, even in the control group, in the second half of the follow-up period, complicating the estimation of efficacy beyond 6 months. The authors will continue to follow up with the participants for an additional year, and report on the efficacy during the next malaria season. At the same time, phase III trials of this vaccine across five African sites of differing malaria transmission and seasonality are just starting. We will look forward to seeing the results of those trials, hopefully confirming these results. Maybe we can finally crack the holy grail of malaria vaccine development, and perhaps have a chance at getting rid of one of our most ancient scourges once and for all.