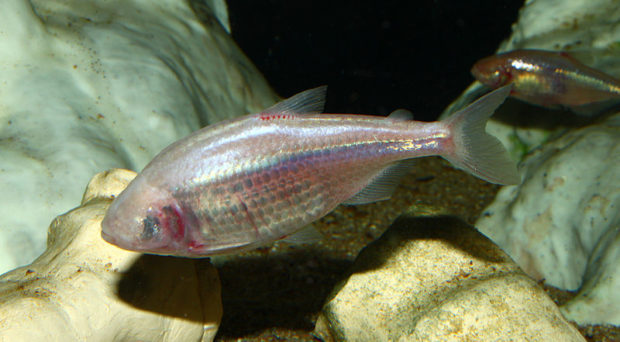 The world’s waters are full of weird and wonderful creatures. Astyanax mexicanus, otherwise known as the Mexican Tetra, is no exception.

Hardly larger than a tin of sardines and visually unremarkable, the surface variety can be spotted in rivers from Eastern Mexico all the way to Southern Texas.

However, the fame of Astyanax mexicanus does not arise from this river dwelling surface population. Only when journeying into the dark depths of isolated limestone Central American caves, is it possible to find the oddball relatives of surface fish populations.

Each population of cavefish is characterized by a distinctive set of common traits. The loss of its eyes means it instead depends on detecting fluctuations in water pressure through its lateral lines to aid navigation. Unlike the shiny silver coloration of its river dwelling cousin, the blind cavefish populations have lost all pigmentation, causing their scales to appear a ghostly pale pink as a consequence.

Despite their physical differences, surface fish and cave fish are more similar than they appear. Surface –cavefish hybrids have been observed in the Chica caves of Mexico, suggesting that surface fish DNA markers could be introduced into cavefish populations through the mating of hybrids with other members of the cavefish population.

Phylogenetic analysis using mitochondrial DNA led to the widely accepted theory that at least two distinct surface residing ancestors gave rise to the present day cave populations over the period of several million years. The older ancestral stock is now thought to be extinct, with the surviving stock then invading the Western Micos caves as well as others further to the south east.

A recently published study in BMC Evolutionary Biology takes a controversial view, arguing that the coalescence time of mitochondrial genes in a particular cavefish population, alone, should not be interpreted to indicate the age of the oldest cavefish populations.

If this hypothesis were to be correct, the blind Mexican cavefish would have become eyeless in an impressively short time. It has been suggested that the necessary alleles must have been present in ancestral surface populations to allow these alleles to reach a frequency high enough for this to occur at a sufficiently fast rate.

Selection pressures present in each cave that have allowed this to occur in parallel across different populations are also still keenly debated. The lack of need for eye development has been suggested to conserve energy for seeking food in habitats where food is scarce. A recent study has also suggested a molecular basis, where on inhibition of the protein chaperone Hsp90, increased eye size variation could be observed. However, the identification of different eye gene mutations in different cavefish populations suggests a combination of different evolutionary factors at play.

If the findings of Fumey et al. were to be confirmed, it is likely Astyanax mexicanus would become a favored model for deciphering the molecular basis surrounding its speedy rates of evolutionary adaptation. Nonetheless, this publication in BMC Evolutionary Biology only continues to fuel the intrigue and debate surrounding the evolution of this unusual species.