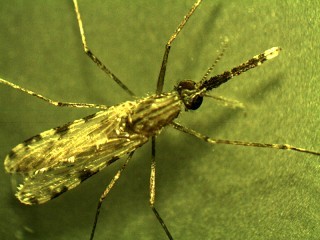 In malaria endemic Africa, chemicals are intensively used to control mosquitoes. Malaria is a vector-borne disease transmitted by female Anopheles mosquitoes. These mosquitoes reproduce in collections of natural or artificial water.

In most districts of Sub-Saharan Africa, urbanization is anarchical or not well planned. Many districts are wetlands and floodable locations; there is no plan of modern urbanization and houses are built anarchically. Therefore, during the rainy season most houses are surrounded by stagnant waters, which favor Anopheles mosquito proliferation.

High amounts of mosquito larval breeding sites are encountered in most African districts. The houses’ architecture also facilitates entry and exit of mosquitoes. Consequently, during the time we spray chemicals to kill mosquitoes indoors, many other adult mosquitoes emerge outside and enter the houses a short time later, when the effect of chemicals disappears, and continuously bite and transmit malaria. It has been demonstrated that, despite the large-scale indoor residual sprayings with chemicals, malaria transmission in endemic Africa is still very high.

I think, mosquito larval source management in Africa should be another policy option, alongside mosquito nets, for reducing malaria morbidity in both urban and rural areas where a sufficient proportion of larval habitats can be targeted.

For this purpose, natural enemies of mosquitoes can be considered. Romanomermis iyengari (Mermithidae) is one of several species of entomopathogenic nematodes which parasitize and kill mosquito larvae.

Various studies have demonstrated the effectiveness of this nematode for mosquito control in some parts of the world. Our recent work demonstrated that monthly application of 3500 pre-parasitic nematodes per m2 was enough to control effectively larval An. gambiae in wetlands and floodable locations in Benin, West Africa.

Romanomermis iyengari is a parasite specific to mosquito larvae (see this video) and its mass production is well established. A large-scale production system for this worm has been developed for Africa, using endogenous and cost-effective materials which are locally available in sub-Saharan Africa. The production system employs three technicians and can produce monthly a sufficient amount of nematodes to treat at least 75 000 square metres of breeding sites.

After procurement of a rearing facility,  the primary cost involved in the large scale production of R. iyengari are the salaries of technical staff, maintenance of a blood meal source (chickens), and food for larval and adult mosquitoes (fish food and sugar, respectively). In Africa, where salaries are relatively low, large scale production of this insect-parasitic nematode is consequently affordable. Adoption of nematode technology will significantly reduce costs related to malaria control in Africa where there are still about 174 million malaria cases yearly.

Furthermore, R. iyengari is harmless for vertebrates. When live infective juveniles of R. iyengari were injected intravenously into animals such as mice, guinea pig, rabbit and chicken, the overall health of these vertebrates remained unchanged. In treated animals, the histology of organs such as liver, spleen, kidneys, lungs and the gastrointestinal system revealed no lesions linked to the nematode infection. In addition, Gambusia affinis fish exposed over several days to a large number of infective juvenile worms were not affected in any way. Thus, the use of this biological control agent raises no concern for the health of vertebrates. Thiery Alavo holds a PhD in Agricultural Sciences from Humboldt Universitaet zu Berlin (Germany). He is Professor of Entomology at the Université d’Abomey-Calavi (Benin). His research interest emphasizes the use of non-chemical solutions for pests and vectors control.