Estimates show millions of additional deaths have been averted, or avoided, as a result of scientific advances during the pandemic. In a paper in Health Research Policy and Systems we addressed questions about how advances were so rapid, and why national death rates varied so much.

Trials were conducted to find new uses for existing (ie, re-purposed) drugs that had already been shown to be safe to treat other illnesses. In the UK, the Randomised Evaluation of COVID-19 Therapy (RECOVERY) trial was designed so it could efficiently test a range of existing drugs simultaneously. These included dexamethasone, a widely used corticosteroid. Within a 100 days, much quicker than usual, RECOVERY identified dexamethasone as the first treatment in any country proven to improve survival from COVID-19.

Health research in the UK is well coordinated because the health department’s National Institute for Health Research (NIHR) is embedded throughout the NHS in every hospital trust. This accelerated progress by ensuring adherence to the small number of COVID-related urgent national priorities. Further, it meant all 170-plus hospital trusts in the country had trained research capacity among the healthcare staff so, after reorganisation if necessary, they could participate in the RECOVERY trial. There was also accelerated ethics approval, and enhanced data access and sharing.

Once the effectiveness at reducing deaths had been proven, the findings were published in similarly record quick time. Corticosteroids are relatively cheap and widely available.

Rapid development of the first vaccines

We also analysed how the development of COVID-19 vaccines in the UK, the US and Germany was faster than ever before. Some of the features of health research systems described above played a part in the accelerate progress, but additional features were even more important.

In each of the 3 countries, by the end of 2019 long-term research had made considerable progress in creating new platforms to develop vaccines. Sarah Gilbert and colleagues at the Jenner Institute at the University of Oxford had developed one new platform. They later partnered with AstraZeneca.

A different new platform had emerged from long-term research on messenger ribonucleic acid (mRNA). Research at US universities included vital work at the University of Pennsylvania by Katalin Karikó and Drew Weissman.  This led to further development by the specifically created company Moderna. Research on mRNA was also conducted at the University of Mainz in Germany by medical academics Uğur Şahin and Özlem Türeci who went on to create BioNTech, which later partnered with Pfizer.

Fortunately for humanity, all three new platforms were ready to be deployed as soon as the genome of the new SARS-CoV-2 virus was identified and published in early January 2020.

Many parts of existing health research systems, including regulatory authorities and trials capacity, focused on the vaccine research. With unprecedented concentration of resources, including financial – especially in the US with Operation Warp Speed, the teams were able to make such rapid progress. Sometimes key stages were safely undertaken in parallel.

High quality trials capacity developed in preceding years in countries including Brazil also played an important part in testing vaccines developed by both Oxford/AstraZeneca and in China.

Sadly, despite these successes, many people had died before being vaccinated (and a smaller number after) and treatments could only save a proportion of seriously ill patients. The death rate was often higher for indigenous and other minority communities, and globally there was inequitable access to vaccines and new drugs.

According to Worldometer, by the end of 2021 just 10 people per million population in New Zealand had died of COVID, and just 86 per million in Australia. In contrast, and despite the scientific progress, 2,172 per million had died in the UK, 2,536 in the US, and 2,882 in Brazil. Canada and Germany were in the middle of the spectrum, but with much lower death rates than the UK.

the agile response of highly skilled and experienced researchers in close partnership with policymakers through the Emergency Response Priority Research workstream has ensured health decision makers have  had the best possible local evidence on which to base operational decisions.

Many factors such as location helped explain the level of success in controlling the virus. A major factor was that many lives were saved by political leaders adopting evidence-informed non-pharmaceutical interventions including lockdowns and mask mandates to control the virus in their jurisdictions, but these policies were introduced at different speeds and levels in different countries.

At crucial times, policymakers in Brazil, the UK, and the US (especially under President Trump) are reported to have given insufficient attention to the scientific evidence on how best to control the virus.

A culture of decision-makers working with researchers to use evidence to produce and communicate policies is a key aspect of health research systems, and was a feature of successes in Australia, Canada, New Zealand and initially Germany.

Australia saw widespread efforts to build on existing links between researchers and policymakers, especially in New South Wales, where, an evaluation claimed: “the agile response of highly skilled and experienced researchers in close partnership with policymakers through the Emergency Response Priority Research workstream has ensured health decision makers have  had the best possible local evidence on which to base operational decisions.”

Two of us noted early in the pandemic, that despite some challenges with producing and using evidence, “Compared to many countries, Canada holds evidence in high regard.” Prime Minister Justin Trudeau emphasised the importance of investing in scientific research to inform decisions.

science, scientists and science communicators have been at the forefront of the Government’s…fight to eliminate COVID-19 from New Zealand.

In New Zealand, the health research system strategy emphasises the importance of translating research findings into policy and practice. Prime Minister Jacinda Ardern won international praise for using evidence in her policymaking and communications, and said in a 2020 report: “science, scientists and science communicators have been at the forefront of the Government’s…fight to eliminate COVID-19 from New Zealand.”

Globally, despite all the successes of research systems, the pandemic created many challenges that need to be addressed, especially for non-COVID, early career, female and minority researchers. 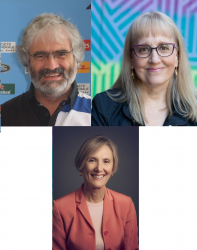 Stephen R Hanney, PhD is Emeritus Professor in the Health Economics Research Group, Division of Global Health at Brunel University London. He has studied the best way to organise health research systems, and assess the impact of their research, for three decades.(Twitter: HERG Brunel: @hergbrunel)

Sharon E Straus, MD, is a professor in the Department of Medicine, at the University of Toronto and Physician-in-Chief, St. Michael's Hospital-Unity Health Toronto. She is a clinical epidemiologist and geriatrician.