Scientists had long assumed that the seafloors of our world’s oceans had limited biodiversity and complex life. After all, how could any organism survive without access to the sun’s energy?

That assumption was shattered in 1977 when researchers discovered a thriving ecosystem at the bottom of the ocean at rifting zones near the Galápagos Islands (Corliss et al. 1979). As opposed to relying on food-webs driven by photosynthetic energy, deep-sea organisms instead depend on chemosynthesis.

Chemosynthetic energy is generated by symbiotic bacteria that convert energy from chemicals released from beneath the earth’s crust. We now know that chemosynthesis is widespread throughout the ocean floor, ranging from hydrothermal vents, cold seeps, organic falls, mud volcanos, and other deep-sea sediments. At least seven diverse deep-sea invertebrate taxa have been described to possess some form of chemosynthetic symbiosis, including bivalves, crabs, shrimp, and especially tubeworms

Deep-sea tubeworms belong to the annelid group Siboglinidae and have drawn considerable attention due to their abundance and dominance in deep-sea chemosynthetic environments. More than 200 species of siboglinids have been described within four major groups (Vestimentifera, Monilifera, Osedax, and Frenulata).

As adults, most tubeworms completely lack a mouth, gut, and anus, relying solely on sulfur-oxidizing bacteria for nutrition and growth. The worms host these bacteria in a specialized organ known as a trophosome. The tubeworm Lamellibrachia luymesi can be found at cold seeps in the Gulf of Mexico where it acts as an ecosystem engineer, creating habitats for other deep-sea species.

Despite broad scientific interest in understanding tubeworms’ adaptations to deep-sea hydrothermal vents and seeps, the lack of genomic resources has hindered research into the genetic underpinnings that allow them to thrive in extreme environments.

In our recent publication in BMC Biology (Li et al. 2019), we report the complete genome sequence of the cold seep-dwelling L. luymesi to address questions of how tubeworms establish and maintain symbioses with chemoautotrophic bacteria. By using comparative genomics, transcriptomic, and proteomic analyses, we provide evidence for the molecular pathways and genes which may underlie tubeworm’s extraordinary adaptations to extreme environments and symbiosis.

To our surprise, the L. luymesi genome lacks many important genes related to amino acid synthesis. As amino acids are essential for building proteins in most animals, this result indicates that the host tubeworm depends on symbionts for some critical amino acids. In addition to the provisioning of amino acids by symbionts, we have found evidence of a second possible nutritional mode whereby the host directly digests symbionts, as shown by the detection of abundant host-derived digestive enzymes in trophosome tissue.

Tubeworms can thrive in chemosynthetic habitats thanks to specialized hemoglobin molecules that can bind oxygen and sulfide simultaneously from the environment and transfer it to the bacterial symbionts.

Meanwhile, many gene families are expanded in the Lamellibrachia genome, suggesting different or specialized roles for these genes compared to their known roles in other animals. Among our findings, we identified more hemoglobin genes in L. luymesi than most other animals. Hemoglobin is an iron-binding protein responsible for the transport of oxygen by many animal’s circulatory systems.

One of the remarkable adaptations contributing to the ability of tubeworms to thrive in chemosynthetic habitats involves their specialized hemoglobin molecules that can bind oxygen and sulfide simultaneously from the environment and transfer it to the bacterial symbionts. Several gene families typically involved in immune responses show modification, perhaps indicating a role in tolerance to, or acquisition of, bacterial symbionts.

Compared to other lophotrochozoans, modifications were observed in several gene families related to the worm’s unique life history which are known to play important roles in apoptosis, cell proliferation, and aging. The latter is particularly interesting as the cold seep-living tubeworms have much slower growth rates compared to their relatives living at superheated hydrothermal vents. L. luymesi can live up to 250 years, making it one of the most long-lived animals in the world.

We hope that characteristics of the Lamellibrachia luymesi genome reported in our paper will be valuable for future studies seeking to unravel adaptations to extreme chemosynthetic environments, evolution of the incredibly diverse Annelida, and the molecular basis for host-microbe symbiosis. 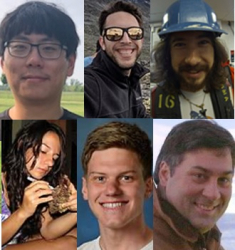 Yuanning Li is a Postdoc currently at Vanderbilt University. He is broadly interested in using genomic tools to understand evolution of deep-sea chemosynthetic organisms and animal phylogeny.

Michael Tassia is a PhD Candidate in the Department of Biological Sciences at Auburn University interested in the evolution of immune systems across invertebrate animals. In particular, his research centralizes on the invertebrate group, Hemichordata, and the innate immune system they share with their mammalian cousins.

Damien S. Waits is a Research Associate in the Department of Biological Sciences at Auburn University, His work involves supporting bioinformatic projects across Auburn University's campus. He is interested in symbiosis and the role contaminant sequences play in high throughput sequencing data.

Viktoria E. Bogantes is a PhD Candidate in the Department of Biological Sciences at Auburn University. She is interested in assessing diversity, biogeography and systematics of particular annelid groups by using integrative taxonomic approaches.

Kyle T. David is a PhD student in the Department of Biological Sciences at Auburn University. He is interested in bioinformatic methods for exploring molecular evolution, particularly with regard to historically understudied non-vertebrate clades.

Kenneth M. Halalnych is The Stewart W. Schneller Endowed Chair in the Department of Biological Sciences at Auburn University. He is broadly interested in the evolution of marine invertebrates using genomic tools.