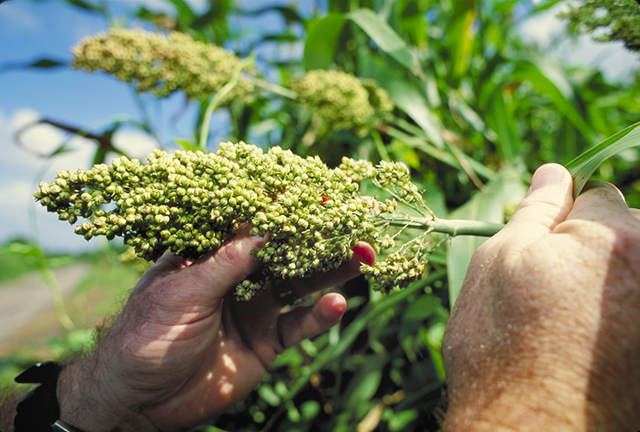 This post was originally featured on BioMed Central’s magazine Biome.

Grasses belonging to the genus Sorghum are grown on a large scale in the United States, mainly as animal feed. However, in light of drives to reduce greenhouse gas emissions, sorghum has also been grown as a biofuel. Sorghum crops have potential benefits over corn as alternative feedstocks for biofuel production, since they are drought tolerant and can be grown on marginal lands. In a recent study published in Biotechnology for Biofuels, Michael Wang and colleagues from the Argonne National Laboratories, USA, present a life cycle analysis to model the inputs and outputs involved in the cultivation, transport, processing and use of sorghum-derived ethanol as a vehicle fuel.

The authors compared three varieties of sorghum feedstock (grain, sweet and forage) that vary in starch, sugar content and farming requirements, under different technological scenarios for processing into ethanol. Well-to-wheel (WTW) analyses are used to determine the amount of energy consumed and greenhouse gases emitted from when a fuel is produced through to its use to power the wheels of a vehicle. The fossil fuel consumption and greenhouse gas emissions arising during the biofuel production life cycle were measured as a proportion of the WTW rates that would otherwise arise from the equivalent production and use of gasoline.

All of the sorghum pathways explored offer significant fossil energy savings and a reduction in greenhouse gas emissions, when compared to gasoline. Further reductions can be gained by using renewable energy to power the ethanol production plant, such as burning a fraction of the cellulosic feedstock or onsite generation of biogas from animal waste. Sorghum cultivation also incurs significant greenhouse gas emissions via fertiliser use and this can be partially offset by co-producing nitrogen rich vinasse, during ethanol production, that can be fed back into the system to fertilize the fuel crops.

It is innovative one.
One of the renewable fuel, briquettes are the top quality fuel made from bio
waste using the briquette plant machines burn without producing ash or releasing greenhouse gas emissions. So, it is the best way to reduce emissions and save earth.

This is the renewable way to meet energy demands.