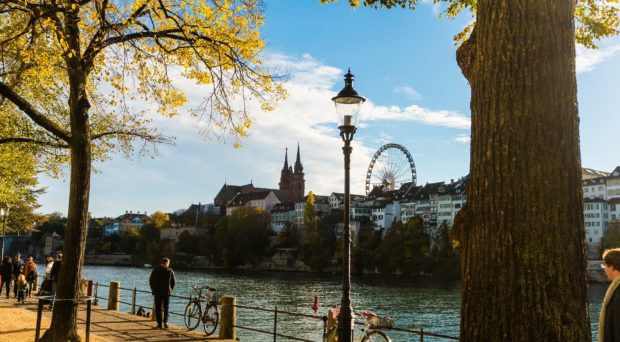 The annual international conference on Intelligent Systems for Molecular biology (ISMB) is the flagship meeting for the International Society for Computational Biology (ISCB). The European conference on Computational Biology (ECCB) is a major bioinformatics and computational biology meeting which is held jointly with the ISMB meeting every two years. Together, ISMB/ECCB brings together people from the fields of computer science, molecular biology, mathematics, statistics and other related fields, showcasing the best and latest developments in bioinformatics and computational biology.

The conference is focused on its Communities of Special Interest, or COSIs. There were 20 COSI tracks and workshops present, all representing major research areas in the field of computational biology.

ISMBECCB  2019 took place in Basel, Switzerland. In general, the conference is very much focused on its Communities of Special Interest, or COSIs. There were 20 COSI tracks and workshops present at the meeting this year, all representing major research areas in the field of computational biology. Each COSI ran their own sessions (COSI tracks) as part of the conference. There were also a number of Special Sessions, Technology Tracks  and two Special Tracks (on Big Data to Knowledge (BD2K) and Elixir).

As you can imagine from such a comprehensive, multi-track program, it’s simply not possible to cover everything here. But here is a quick summary of some of the highlights.

As is always the case at ISCB conferences, delegates were treated to a number of excellent presentations by some prestigious keynote speakers.

These included Nikolaus Rajewsky, from the Max Delbrück Center for Molecular Medicine, presenting his work using single-cell approaches to investigate gene regulation in space and time, William Stafford Noble, from the University of Washington, on using machine learning methods to gain insights in complex genomic or proteomic data and Christophe Dessimoz, who discussed his research on the challenges and rewards of benchmarking.

Rather excitingly, the conference offered live-streaming of all the Distinguished Keynotes for all ISCB members that were not able to attend. 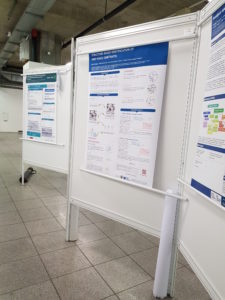 Every year, ISCB gives out four awards to recognize specific achievements by researchers in the field.

This year, it included William Stafford Noble, winner of the ISCB Innovator award, who has recently joined the BMC Bioinformatics editorial board as an Associate Editor

But, the meeting wasn’t just about the top scientists in the field. It was  was opened with a one day student symposium, with tutorials on a wide range of topics including interpretability for deep learning models, visualization of large biological data and tools for reproducible research.

There were over 1,100 posters on display at the conference, many from early career researchers, the lively sessions giving young scientists an opportunity to talk about their work;  there were posters from different categories throughout the conference on a very diverse range of topics. Just to give a flavor on what was on display, there were posters on energetic conflicts in the catalytic sites of proteins, the Sickle Cell Disease Ontology, modeling of immune responses to Clostridium difficile infection, “Nightingale”, which is a library of reusable data visualization components and a number of posters on bioinformatics teaching and teaching resources. 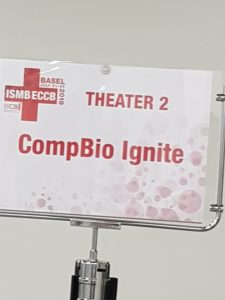 The conference also introduced CompBio Ignite talks, providing researchers not selected for oral presentations the opportunity to give a six-minute so called “lighting style” talk throughout the lunch hour.

As already mentioned, the ISMB has a well-established collaboration with a number of Communities of Special Interest (COSIs), including SysMod: Computational Modeling of Biological Systems, MLCSB: Machine Learning in Computational and Systems Biology and 3DSIG: Structural Bioinformatics and Computational Biophysics.

The keynote at the 3DSIG session, presented by Torsten Schwede, from the SIB Swiss Institute of Bioinformatics, was a celebration of 25 years of the automated protein structure homology-modelling server, SWISS-MODEL, its recent progress and some key lessons have been learned throughout its development.

One of the most interesting talks in the MLCSB COSI session described DrugCell, a “visible” neural network based artificial intelligence that predicts anti-cancer drug responses, taking into account structural features of the drugs themselves as well as the genomic features of the cells affected. The researchers found that the compound that performed best was the drug vincristine, with the neural network highlighting the well-defined pathways affected by the drug, such as cell adhesion and division.

And the SysMod keynote, presented by Trey Ideker, presented the Cancer Map Initiative, the aim of the project being to produce a complete map of the gene and protein wiring diagram of a cancer cell, information that is vital for developing computational models of cancer cells for both basic and clinical research.

One of the things that struck me about this conference was the support given to young researchers, not only in terms of the training program, but also giving them the opportunity to describe their research to a specialized audience and the possibility of networking and setting up collaborations. The field of computational biology is exciting and fast paced and I particularly enjoyed the MLCSB sessions and hearing more about Elixir and the work they do to support some of the field’s most important resources. I look forward to attending the ISMB conference next year, which will be held in Montreal.