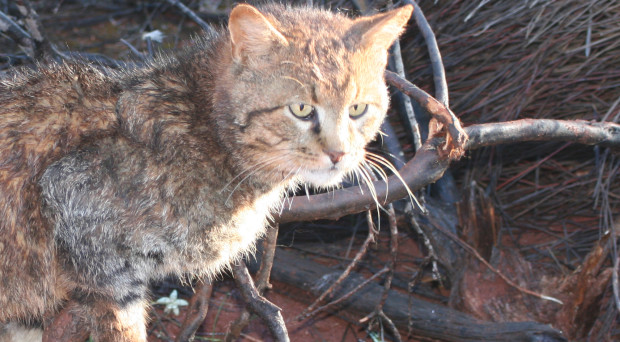 Australia has a long history of introduced non-native species. Two of the 22 invasive mammal species are predators – the domestic cat and the red fox. The first European settlers brought animals with them to feel more at home.

They introduced, among others, rabbits and foxes for hunting, but did they also bring the cat?

One can imagine that a family of early settlers brought their housecat with them, or a cat to keep rodents from the grain storage. It is also very likely that a cat on a ship just jumped off to find a new home ‘down under’.

Or were cats introduced much earlier, just like the dingo?

We know that the dingo came to Australia around 5,000 years ago. It is possible that cats were brought to Australia through the trading of Southeast Asian Maccassans and Aboriginals. They traded in trepang (seacucumbers), but surely also in other goods? These trade connections were that extensive that they even share some similar words.

Today feral cats are widespread throughout Australia. They have a deleterious effect on the native species through predation, food competition and the spreading of disease.

Previous attempts to reintroduce threatened species into parts of Australia have often been unsuccessful due to ongoing predation by cats. Feral cats are independent of humans and live in self-perpetuating populations. They avoid human contact and are difficult to catch.

Preparing for our study

In Australia, especially in Western Australia, nothing is close. ‘Just up the road’ can mean 100km, but just as equally it could be 900km. It means that there was a lot to plan and pack in order to be able to get samples for the study.

It also meant that I was able to spend a lot of time in all kinds of Australia’s habitats. In the red dirt outback, in the Southwest with its huge trees and ever-fragrant eucalyptus or on remote islands with the only building being a sheep-shearing shed. With a lot of help from people that collected samples from all kinds of locations we were able to unravel the genetic origin of cats in Australia.

Cats were indeed brought to Australia most likely with the first European settlers and some of these introduced cat genotypes are still discernable on very isolated islands surrounding Australia.

These results are not only important to unravel the history of cats in Australia, but also give researchers and conservationists a timeframe of feral cat introduction. We now know that cats were introduced merely 200 years ago, but have adapted seemingly effortless to their new environment.

With this knowledge the extinction and threat of native species can be put into perspective to the invasion of cats. This gives us valuable information on the effects that cats have, and have had, on native Australian species and can improve feral cat management.

In defense of the Australian Ministry of the Environment’s campaign to eradicate feral cats:

And I agree wholeheartedly—trapping and euthanasia is too little too late to counter the ongoing feral cat scourge. What must be done instead is systematic eradication of unrestrained invasive felines, everywhere. They must be hunted to extinction. Nothing less will work.

And this arguably “extreme” option has never been tried against feral cats. But it has been tried against other very widespread and abundant (usually native) species, and quite successfully—for example, timber wolves, passenger pigeons, great auks and—perhaps the most extreme example in history—the Rocky Mountain locust (Melanoplus spretus).

These locusts once plagued farms from California to Maine. They formed swarms of tens of trillions of individuals that weighed more than 27 million tons, covered areas larger than the state of California, blotted out the sun when they took flight and ate the very clothes off people’s backs.

Their swarms represented the greatest concentrations of animal biomass ever known. Yet we humans eradicated them in a little over three years—from 1877 to 1880. Mandatory extermination programs during peak swarming season (mostly by hand!) and bounties of up to $1 per bushel—big money in those days—reduced their numbers to where their remaining egg-deposition sites could be located, plowed under and/or flooded. Contemporary reports indicated plowing destroyed up to 150 egg-cases per square inch.

But most important, Great Plains states switched to early-maturing winter wheat that was harvested before swarming season, effectively starving the locusts when they accumulated.

You’ll note this is the exact opposite of what the TNR practitioners do. You don’t get rid of a pest by feeding it.

Although the insects continued to be seen into the mid-1880s, there were no large swarms after 1877. The species was formally declared extinct in 2014, after comprehensive electrophoresis surveys of North American grasshopper DNA failed to find any remaining evidence of its genome.

Today Australians are as desperate to save their unique and irreplaceable wildlife and protect their citizens from hundreds of deaths and thousands of debilitating illnesses caused annually by cat-vectored zoonotic diseases like toxoplasmosis and bartonellosis, as Americans once were to stave off mass-starvation before onsets of devouring locust swarms. And their desperation is justified. Australian scientists have found that 75 million native mammals, birds, reptiles and amphibians disappear down feral cat gullets each night. How ‘humane’ is that?

Since their introduction into Australia feral cats have eradicated 28 native marsupial species, and they currently threaten 127 more species of native Australian wildlife with imminent extinction. The Aussies have no choice but to proceed with their campaign against the cats—over-the-hill ‘sex-symbol’ Bridgette Bardot’s screeching and flailing notwithstanding.

I adamantly support Australia’s attempt to eradicate feral cats. Two of my grandchildren, ages nine and six, were born and raised there. They and all of Australia’s children deserve as part of their rightful heritage the opportunity to see wallabies, shingle-backed skinks, White’s tree-frogs, echidnas, numbats and king parrots somewhere other than in a picture-book of extinct Australian animals.

The situation in North America is rapidly becoming as desperate as Australia’s—here feral cats destroy between 1.4 and 3.7 billion wild birds and 6.9 and 20.7 billion wild mammals annually. In the 1980s wildlife ecologist Stanley Temple with the University of Wisconsin at Madison demonstrated that feral, house and barn-cats destroyed 8 million wild birds annually in rural Wisconsin alone, with barn cats being the worst offenders. In one San Diego study, 35 well-fed, at-liberty house cats tortured and killed an estimated 1,960 wild mammals, birds and lizards in a single year. 67% of the mammals, 95% of the birds and 100% of the lizards were native species, not pest species.

As the TNR lobbyists are so fond of reminding us, we humans are the greatest scourge on earth when it comes to extinction since the comet that took out the dinosaurs. We’ve proved it time and again throughout history. Well and good. Let’s for once apply our destructive capabilities to eradicate an alien scourge we ourselves created, correct our mistake and alleviate the horrendous devastation this human-engendered scourge inflicts on wildlife populations worldwide.

Placing profitable bounties on cats will prove absolutely essential to any serious eradication effort. The late American author Robert A. Heinlein once wrote “Never appeal to a man’s better nature. He may not have one. Invoking his self-interest gives you more leverage.” If humans can realize monetary gain from dead feral cats, feral cats will quickly become dead, and in substantial numbers. And the slaughter they inflict on native faunal assemblages, and the zoonotic health risks they present to the public, will diminish accordingly.

Such a campaign might have the added benefits of reducing unemployment, enabling more people to work outdoors, and inducing responsible cat-lovers to keep their pets inside—something both wildlife and most cat advocates agree is desirable—rather than risk them being culled by bounty-hunters. I realize not many will like this proposal, but I submit it’s the only strategy for which there is historical evidence that it works. What other alternative is there—’TNR’? No, seriously…