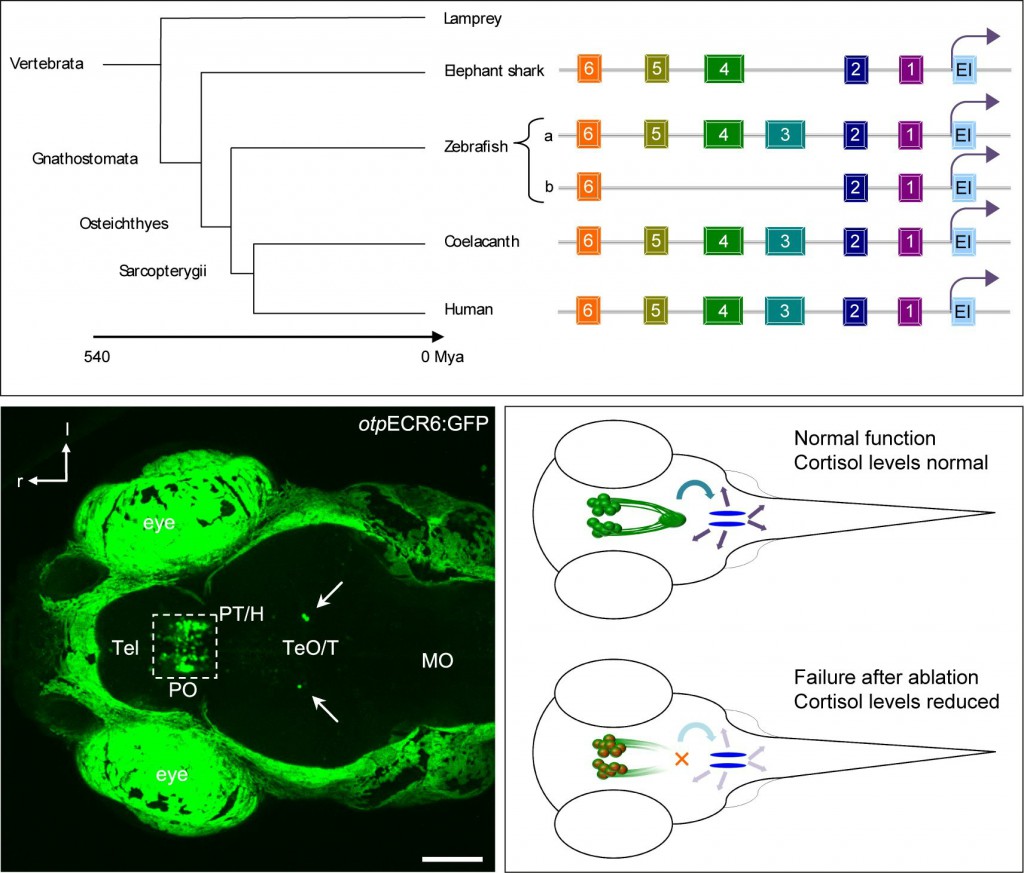 We humans are jawed vertebrates. We share key anatomical features with fishes, amphibians, reptiles, birds and other mammals, such as a vertebral column, a spinal cord, a compartmentalized heart, the eponymous jaws, and an elaborate brain divided into forebrain, midbrain, and hindbrain.

In addition to these features, we also share many important physiological mechanisms. One of them is the stress axis. This axis refers to a set of concerted hormonal responses activated to counteract challenges posed by internal or external stressors, and to maintain homeostasis even in challenging environments. The stress axis requires the interaction of three distinct centers: the hypothalamus, the pituitary and the adrenal gland (or interrenal gland in fishes).

The final outcome of the axis is the production of cortisol, which then acts to regulate physiological processes required to cope with the stressor. We are interested in identifying the mechanisms operating in the ontogeny of the stress axis. In particular, our new study focused on the development of the hypothalamus.

In the past decades, many studies have revealed the striking conservation of the genetic toolkit involved in the specification of the neurosecretory hypothalamus in jawed vertebrates.

For example, when the transcription factor (a molecular switch that regulates gene expression) known as Orthopedia (Otp) is mutated in the mouse or in the zebrafish, many of the characteristic cells of the neurosecretory hypothalamus are not developed. Since Otp is also expressed in many other regions of the brain, we wanted to know how this important transcription factor achieves region-specific expression (that is, in the neurosecretory preoptic area of the hypothalamus).

An obvious starting point is to look for regulatory regions around the Otp gene. These regions are stretches of DNA that serve as landing sites for transcription factors and are generally known as cis-regulatory modules (CRM).

Describing these regions is not an easy task, essentially looking for the molecular needle in the genomic haystack. Fortunately, some gene-flanking regions have DNA stretches that are outstandingly conserved, from fishes to humans. Such conservation reflects a powerful evolutionary force preventing accumulation of mutations in these regions which otherwise may impair an essential function. However, ascribing these “living fossil” sequences to a CRM is not straightforward.

We and others have found that the Otp gene is flanked by several “living fossil” sequences. So we began to address our question studying the role of these sequences in reporter assays using the green fluorescent protein (GFP) in transparent embryos of the zebrafish, an amenable organism to study developmental biological questions.

Finally, we identified one sequence, called otpECR6, as a CRM used to achieve expression in the neurosecretory preoptic area of the hypothalamus. We took advantage of the specific regulatory potential of otpECR6 to manipulate the function of this area using a pharmacogenetic approach. As a result, we managed to impair the output of the larval zebrafish stress axis, namely to significantly reduce the levels of cortisol produced after a stressing event.

Since this “living fossil” sequence is almost identical in humans and its function most likely seems to be conserved in mammals, we speculated that non-lethal mutations in this region might be associated with stress-related disorders.

In addition, we are at a desirable moment to define the genetic regulatory network mediating the development of the neurosecretory hypothalamus. Our results highlight the importance of studying conserved mechanisms in a non-mammalian organism like zebrafish, and the sequence identified by us can be used as a tool to analyze the structure and function of the stress-controlling brain center in intact and living animals.