Today, sloths are all small tree-climbing animals. However new research, published today in BMC Evolutionary Biology, suggests this makes them the black sheep of the sloth family; instead most species in this group have been more like the giant ground sloths, now long extinct. Is there a stranger mammal than the sloth? It is not just their bizarre appearance that makes them one of the odder animals in existence. The slow movement which gives them their name reflects their very low metabolic rate (half that expected for a mammal of their size) and the lowest body temperature of any mammal; both unusual adaptations to the low nutritional value of their diet of leaves.

Even stranger, a unique and diverse community of algae live in the fur of sloths, including species of green algae that are found nowhere else in nature. These algae are believed to have a symbiotic relationship with sloths, providing camouflage and additional nutrition. The brown throated sloth even has a moth that lives in its fur and lays eggs in its dung. 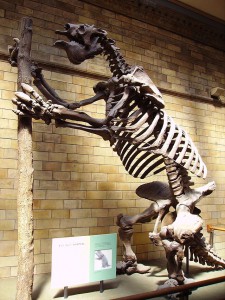 While living sloths are strange enough, their extinct ancestors were even more remarkable. Existing sloths are all small, tree dwelling creatures weighing no more than 13 pounds (6 kg). Yet as recently as 10,000 years ago, giant ground sloths were common throughout the Americas. Megatherium americanum were the size of elephants, weighing up to four tonnes, while the claws alone of the five tonne Eremotherium eomigrans reached up to a foot long. Indeed sloths species with a mass of over 1000 kg existed in at least four different sloth families

Today’s species represent a very small amount of the sloth diversity that once existed. Just six species remain, four three-toed sloth species in the Bradypodidae family and two species of two-toed sloth in the Megalonychidae family. Yet the fossil record records over 50 sloth species spread over eight different families.

A new study, published today in BMC Evolutionary Biology, suggests that modern day sloths do not reflect the overall evolutionary trends in this group. Instead, the giant ground sloths seem to be much more representative of how sloths as a group evolved.

Researchers, led by Anjali Goswami at University College London, modelled the evolution of sloth body size using previously published estimates of body mass from both living and extinct species. They found a clear trend for the evolution of a larger and larger body size in sloths over time. This was not just true for ground sloths, where for example the family including Megatherium showed a huge average mass increase of 129 kg per million years. These trends were also seen in the family Megalonychidae, which includes modern-day two-toed sloths, where there was an average body mass increase of 2.6 kg per million years; substantial when compared to the average mass of 5 kg in modern two-toed sloths.

What happened to all the big ones?

Sloths first emerged 50 million years ago and began to spread throughout first South America and then North America, following the Great American Interchange. The results of this new study suggest environmental conditions during this period selected for ever increasing body size. The researchers speculate this could have been due to the climate or competition with larger species. 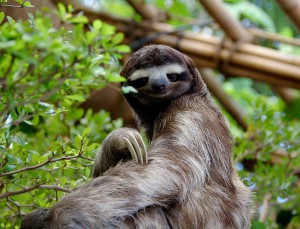 Clearly then, the small tree-dwelling sloths we see today do not reflect the “typical” sloth during their evolution. Almost 90% of sloth species, including all the ground sloths, went extinct around 10,000 years ago. The arrival of humans in the Americas around this time is often believed to be the cause of these mass extinctions, although it is possible that the ice age around this period contributed as well.

Whatever the cause, clearly only the small bodied tree-dwelling sloths, hidden in their tropical forest refuges, were able to survive these events, completely reversing the millions year old trend towards larger and larger sloths.

The importance of fossils

Reconstructing the trends revealed in this research would not have been possible without including data from the fossil record. Existing sloth species appear to be the “black sheep” of the sloth family, obscuring what is otherwise a strong signal in the fossil record of ever increasing body size. As the researchers say, it is hard to infer from a group of small-bodied leaf eaters the existence of something like the giant Megatheriid ground sloths. Modern day sloths then, are revealed not just to be the oddest of mammals, but the black sheep of their own family. Yet by evolving in the opposite direction from most of their cousins, these tiny tree dwellers still survive when the ground-based giants have long ceased to walk the earth.

If someone has studied ground sloth locomotion/bipedal anatomy, I sure wish they’d publish as aside from humans biped mammals are rather rare and of course in science comparison isn’t quite EVERYTHING, but it’s damned close.