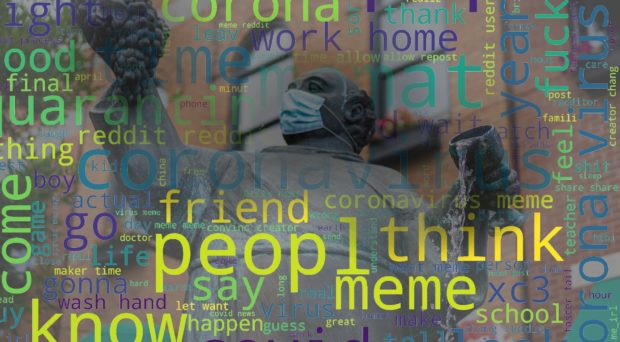 By the author, based on https://unsplash.com/photos/rFkORkehOdg

As a side-effect of the COVID-19 pandemic and social distancing, more people have turned to online platforms for social interactions.

With this, memes in the form of funny images, quotes, jokes, tweets and hashtags have become an even more important social phenomenon, catching the attention of sociologists and network scientists as well as data scientists like us.

Memes can express humor, thoughts, and draw attention to poignant cultural and political themes. Few memes actually become viral and it is unclear what characteristics lead a meme to have merit.

Many authors have explored the social network factors that lead a meme to go viral but bracketed the impact that meme content may have on popularity.

In contrast, our research performs a content-based analysis of what makes a meme successful using advanced machine learning techniques.

Accordingly, we derived our target variable, which is dank (1) if a meme is in the top 5% of the number of upvotes divided by the number of subscribers to a subreddit, and non-dank (0) otherwise.

After data cleaning steps and explanatory analysis we used text analysis and optical character recognition to investigate the relationship between textual attributes and popularity.

The word cloud featured at the top of this post created from every word we gathered indicates certain topics are especially prevalent in the memes from late March 2020.

We found that in most cases, the most occurring words are just as prevalent in the top 5% viral memes as in the non-viral memes, except for the category COVID-19 synonyms which appeared more frequently in dank memes.

Surprisingly, it is not obvious whether image related or textual attributes have the stronger predictive power

We used three supervised learning models to predict whether memes fall into the dank or not dank categories: gradient boosting, random forest, and convolutional neural network.

Not surprisingly, the model trained with all data outperformed the other models. This aligns with previous results in which text and network data held more predictive power for image popularity on Flickr.

We found that the success of a meme can be predicted based on its content alone moderately well; our best performing machine learning model predicts viral memes with an area under roc curve score of (AUC) 0.68.

We also found that both image-related and textual attributes have significant incremental predictive power over each other.

There are many great directions for future research relevant to this project such as analyzing memes inspired by COVID-19 alone or studying the temporal and dynamic aspects of meme success. Data Scientist at Dmlab Ltd.
Nóra Balogh is a data scientist at Dmlab Ltd., Hungary. Previously she was a teaching assistant and a co-supervisor of a student research group at Aquincum Institute of Technology, Budapest and did physics MSc at Budapest University of Technology and Economics. Her work focuses on implementing data science projects in business and industry. Her key interests include managing data science projects, machine learning interpretability, python and data visualisation.