As part of our work in museums and other cultural institutions we, scientists, conservators and art historians, interrogate works of art by looking at them under the microscope and by using non-invasive analytical and imaging techniques.

The elegantly dressed mistress is dramatically lit, while the modestly costumed maid emerges from the dark background

In some cases, important questions cannot be answered by these techniques alone, so micro-samples the size of a period in a 10-point font size writing are taken using surgical tools.

Sometimes, samples removed several decades ago exist in archives which are revisited with newly developed, more powerful micro-analytical methods. The development and improvement of these methods are crucial to get as much as information as possible from these tiny, precious fragments.

However, the human eye is a very powerful analytical tool, so looking at the work of art with the naked eye and under a microscope and bringing different professional perspectives in the process are as important.

In this collective detective work, clues about the artists, their technique, and changes that may have occurred over time are uncovered that bring us closer to the artists and their creations.

In Johannes Vermeer’s Mistress and Maid, dated to 1667-68, two women contemplate a newly arrived letter. The elegantly dressed mistress is dramatically lit, while the modestly costumed maid emerges from the dark background to deliver the letter.

The letter’s inscrutable contents and the mistress’s ambiguous response evoke in the viewer a sense of mystery and uncertainty.

At least since the 1950s, art historians have puzzled over the painting’s apparent lack of finish because of the appearance of the curtain in its otherwise dark and empty background. It had even been suggested that the painting had been finished after Vermeer’s death by another hand to make it saleable.

Our recent investigation has allowed us to address the questions and put these misunderstandings to rest. We discovered that the composition began with a tapestry or painting filling the background, and that this was later painted out by Vermeer, likely after deciding that a relatively dark and plain background would better focus on the women’s interactions.

We found that in this early background Vermeer sketched at least four human figures and other elements in a mixture of black and earth colors, except for a few features composed of a copper-based greenish or bluish pigment, and that these elements were blocked-in before they were fully painted.

Maps, mirrors, paintings, and tapestries frequently embellished Vermeer’s painted interiors so the initial presence of one of these elements is consistent with other examples in the artist’s oeuvre.

Our study also established with certainty that the curtain that now covers the elements in the background is original, and that a change in its original color and form, which had led to some scholars to speculate that the painting had been left unfinished, is responsible for the way it looks today.

We can now confirm that this change in color and lack of form is the result of the use of a copper-based pigment, like a copper resinate.

Pigments of the resinate, oleate, and verdigris families are known to scientists and conservators for changing from green to brown hues when they age.

The blue tablecloth was originally green but it retains its modelling and visual impact.

Interestingly, Vermeer’s estate inventory includes a green tablecloth, and he was an artist keenly interested in direct observation so it is probable that he modeled elements of this composition after objects in his possession – just another aspect that brings us to know this magnificent artist better.

We hope that our findings bring people even closer to this powerful and evocative depiction.

This work was a collaboration among scientists, conservators, and curators at The Metropolitan Museum of Art and The Frick Collection in New York City and at the Doerner Institut, in Munich. 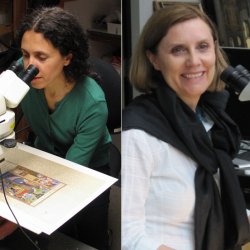 Silvia A. Centeno is a Research Scientist in the Department of Scientific Research at The Metropolitan Museum of Art where she studies artists' materials and techniques and deterioration processes in paintings, photographs, and works of art on paper.