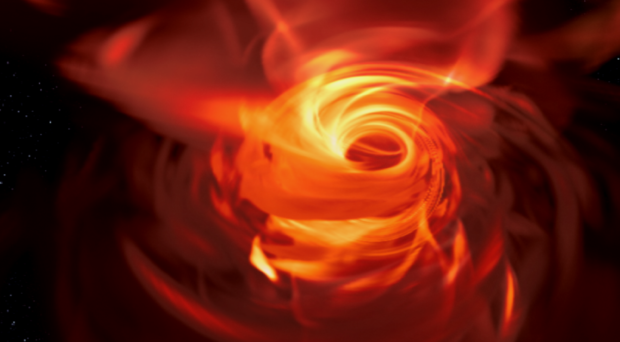 In our most recent paper in Computational Astrophysics and Cosmology we present our latest Virtual Reality visualization. The simulation is based on the black hole in the center of our own Galaxy; Sagittarius A* (Sgr A*). The mass of it; four million times more massive than our own sun. Sgr A* has been studied extensively in the past. But most of these works tried to understand how the object looks like from the point of view of an observer very far out. In this work, we decide to dive into the flow itself by including as much physics as possible.

We decide to dive into the flow itself by including as much physics as possible.

The way such a visualization is generated is a process of many steps. The first step is to simulate the actual dynamics of plasma close to the black hole. This has been done by an General Relativistic Magnetohydrodynamical code called BHAC. This simulation will tell us the structure and dynamics of the surroundings, but to understand how it would look like, we need light. The light is computed in post-processing with the General Relativistic Ray Tracing code RAPTOR that takes into account all kinds of effects within the framework of Albert Einsteins Theory of General Relativity, e.g. light bending, redshifts, beaming.

In the video above you travel towards the black hole in the center of the galaxy. In the distance, you see the stars.  Due to the strong pull of the black hole, the view gets deformed, and you see a dark patch in the sky that bends the starlight around it. When matter starts to accrete onto the black hole, it lights up, the closer it gets, the more light it emits, due to the presence of magnetic fields a magnetic outflow; a jet is launched from the accretion flow, allowing some of the matter to escape. At this point in the video, you start to move into the flow yourself; orbiting the black hole at a close distance where your velocity goes up rapidly, starlight becomes less visible due to the high optical depth of the flow. Luckily, you escape via the magnetized jet.

Due to the strong pull of the black hole, the view gets deformed, and you see a dark patch in the sky that bends the starlight around it.

The movie we generated in VR turned out to be a great tool to show the general public how the direct environment of a black hole looks like. The movie was used in outreach projects, e.g. elementary and high schools. Providing this interactive way of visualizing the universe’s most extreme objects opens up a new window of engaging the public in the wonders of astronomy.

Jordy Davelaar is a PhD-student at the Radboud University in Nijmegen, The Netherlands. His work focuses on plasma simulation and radiation models of accreting supermassive black holes within the Event Horizon Telescope Collaboration. During his PhD he was selected as a Face of Science by the Royal Dutch Academy of Sciences