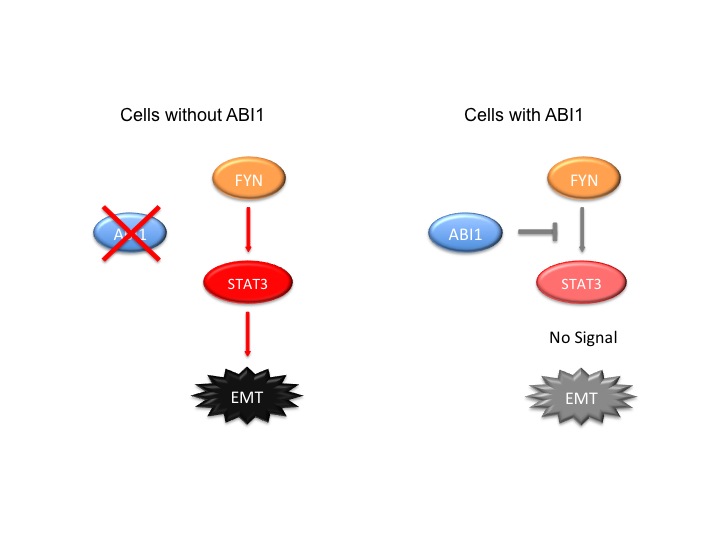 Despite the significant advancement in research and medical treatments for early stages of prostate cancer, mortality rates from prostate cancer remain steady with about 30,000 deaths per year (Figure 2). Therefore, understanding the mechanisms underlying metastatic potential of prostate cells is critical. A new player in the mechanism of prostate tumor progression, ABI1, has been identified as a key regulator of the epithelial mesenchymal transition [EMT], a process known to play a crucial role in cancer progression (see our recently published article in Cell Communication & Signaling).

EMT and Metastasis
Epithelial mesenchymal transition is a mainstay mechanism regulating tumor progression. While there are alternative explanations being posited in the research literature, the EMT hypothesis explains well the mechanism through which cells regulate their potential to spread beyond their point of origin. During this process, epithelial cells lose their cell adhesive properties and gain migratory activity. During EMT, cells also undergo major changes involving gene expression and phenotype.

EMT is a complex process involving multiple layers of regulation, from cell membrane receptors, adhesion molecules, and signaling proteins to transcription factors. However, the discovery of ABI1-mediated suppression mechanism provides a surprisingly straightforward mechanism unifying several processes to one key regulator – ABI1. It also provides a fresh look at some potential drug-targets directed at the EMT pathway.

ABI1 is present in most cells in the human body, however, low ABI1 gene expression is observed in many types of cancerous tumor cells and is especially linked with aggressive tumors. To investigate ABI1’s effect on prostate epithelial cells, we used CRISPR-Cas9 technology to create cells that were lacking the ABI1 gene. This resulted in two key findings: these cells became invasive and the EMT pathway was activated. See Figure 3 below.

Movies of Figure 3 images: Cells with ABI1 and Cells without ABI1.

Impact and Future Directions
The finding of ABI1-mediated regulation of EMT brings the potential for novel use of some already developed drugs which target this pathway, opening possibilities to better treatment options in metastatic prostate cancer. These drugs could shrink the tumor size and/or prevent cells from moving to other organs; ultimately they could kill tumor cells. Linking ABI1 to the EMT pathway also offers new potential directions for drug development. Additionally, there is a diagnostic opportunity: measuring ABI1 levels in patient tumors could be used as an indicator of the aggressiveness and metastatic potential of the tumor, aiding in the choice of treatment that should be used. Many tumor types, not just prostate cancer, utilize EMT to promote metastasis, thus it would be interesting to look at how this regulation holds up in other tissue types.

In summary, the multifunctional role of the ABI1 protein provides a better understanding of several pathways involved in cancer progression and metastasis. This knowledge allows us to further reduce the complexity surrounding cancer signaling, with hopes to be able to generate more targeted treatments with better patient outcomes. Leszek Kotula is an associate professor and co-director of the M.D./Ph.D. program at Upstate Medical University with over 30 years of experience in molecular biology, biochemistry and cancer research. He has a deep appreciation for using an integrative approach to solve scientific problems and utilizing new innovative techniques to advance science and knowledge past the current limitations. His work currently focuses on understanding molecular mechanisms of cancer progression and metastasis.

Maria Ortiz is an M.D./Ph.D. student in Dr. Leszek Kotula’s lab at Upstate Medical University. She is interested in studying the interface between immune system dysfunction and cancer development.