It is thanks to the graded concentration of a protein that snails’ shells are coiled according to new research published in EvoDevo today. In coil-shelled snails, this protein concentration gradient originates from a spot on the right or left of the mantle –  corresponding to the dextral or sinistral nature of the coil. In limpets, and other non-coiled gastropods, the protein is expressed symmetrically in the mantle, causing a cone-shaped shell. 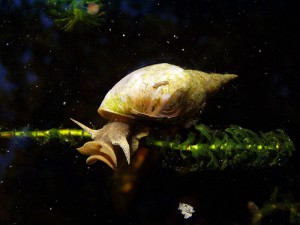 Evolutionary mechanisms for the diversification of shell-types amongst the physiologically diverse gastropods have been of considerable interest for many years. However, the molecular mechanism describing the development different shell shapes were previously poorly understood. Shimizu et al investigated the expression of the decapentaplegic (dpp) gene in the mantle at various developmental stages. They compared expression in two cone-shelled limpets,  Patella vulgata and Nipponacmea fuscoviridis as well as in the right-hand coiled pond snail Lymnaea stagnalis and a sinistral coiled lab-developed snail.

They found that Dpp 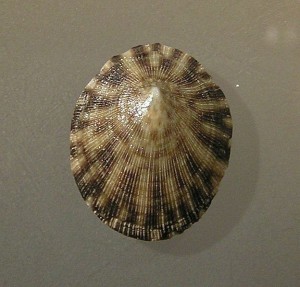 protein gradients matched the shape of the coil, and therefore confirm that the uneven expression of dpp gene in the mantle as an important mechanism causing shell coiling. The authors hypothesize that Dpp acts as a trigger for asymmetric cell proliferation in the mantle, thus creating a non-uniform shell growth resulting in a coiled shell.

Keisuke Shimizu, who led this study, commented: “This molecular mechanism driving for shell coiling persists from early developmental stages though adult life as the shell is replaced. It also provides an explanation for how shell coiling has been lost several times during the evolution of gastropods by the relatively easy loss of asymmetric Dpp.”