Unlike their human counterparts, adolescent guinea pigs  display highly domesticated behavior says a new paper published today in Frontiers in Zoology.  They have  reduced levels of cortisol (a hormone commonly associated with stress) and display less risk-taking behavior, in comparison with their wild relatives. 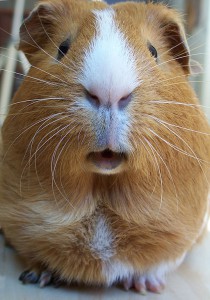 Domestication of animals has been key to the success of humans and our expansion across a broad range of environments. For example, it was in the harsh environment of the Andes that guinea pigs are thought to have been first domesticated as a food source to supplement protein-poor diets.

The process of domestication of animals can have strong effects on their behavior, physiology and morphology. These changes are a result of the different selection pressures imposed by captive environments, as well as selective breeding by humans for particular traits such as docility.

Guinea pigs differ from their wild counterparts, the cavy, both in appearance and in behavior.  However, little is known about the development of these differences during ontogeny – and whether they are caused by altered genetics or as a result of being raised in a captive environment.

In order to investigate the development of domestic behavior in guinea pigs further, researchers at the University of Münster compared a group of adolescent guinea pigs, to adolescent cavies in a number of experiments designed to test explorative, anxiety-related and risk taking behavior.

“Although plenty is known about the results of domestication, the mechanisms driving the differentiation between a wild species and its domesticated form have not yet been understood in detail,” explains Benjamin Zipser, lead author on the study. “Hence, the model we propose could shed new light on the mechanisms involved in the domestication process in general.”

“Our results show that the phenotypic differentiation between guinea pigs and cavies has to occur even earlier in ontogeny, before adolescence,” continues Zipser. “Several possible mechanisms come into question. First, the phenotypic differences could be solely based on genetic differences, which would mean that they are hardwired from the moment of fertilization on. But it is more likely that a combination of genetic and environmental factors shape the phenotypes of guinea pigs and cavies.”

So, our pet guinea pigs have significantly changed since domestication from their wild counterparts. As adolescents, they’re less anxious and also less likely to take risks – if only we could persuade human teenagers to follow their example.