The frozen landscape encountered by Mark Jobling during a recent trip to Lausanne, Switzerland has inspired this month’s ‘Mark my words’ column to discuss the miserable fates of those who perish in the snow.Published in Investigative Genetics this week, Jobling  compares treatment documented by Charles Dickens of disregarded bodies in Lausanne –lost in the snow and subsequently never claimed, left in a small outhouse withering away- to that of a relatively recently found ‘iceman’ body, only a few hundred kilometers to the east.

Ötzi the Iceman, having been found over twenty years ago, has been exposed to extensive experimentation through  numerous studies and analyses determining details about his Neolithic lifestyle and his geographical origins. However, it was only recently that scientists have been able to fully overcome the challenges of genetic analysis associated with the  severely degraded DNA of this specimen; his full genome sequence having been published at the end of February this year. 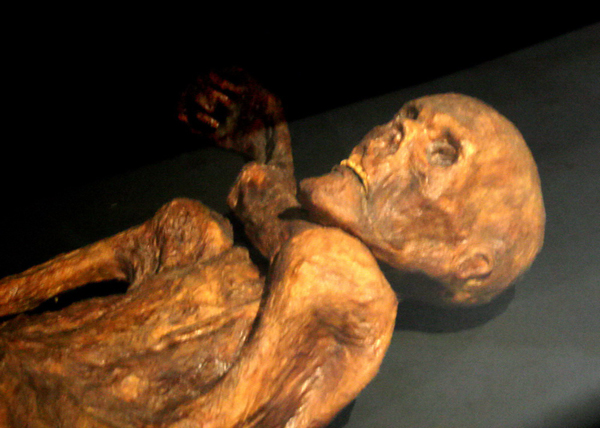 Jobling guides readers through the collated findings surrounding Ötzi; his late Neolithic age of around 5300 years, his mtDNA haplogroup belonging to a previously unknown branch of K1, and phenotypic predictions including blood type O, brown eyes and lactose intolerance. In another interesting use of forensic genetics, investigation of Ötzi’s metagenome identified that he would have suffered from the disease Lyme borreliosis (commonly known as Lyme disease). Analysis of his Y-chromosome haplogroup has indicated that he was most closely related to Sardinian populations, which could suggest that he was an immigrant to the Alps, or may reflect a past shared ancestry between Alpine and Sardinian populations.  Further genetic analysis of related populations is required in order to shed further light on this issue.

Ötzi serves as an interesting case study in the application of forensic genetics, demonstrating the breadth of information that can be extracted and unearthing a wealth of knowledge into the lifestyle of Alpine Neolithic people. It is perhaps natural to wonder how many more secrets he is holding onto, which scientists are yet to extract.