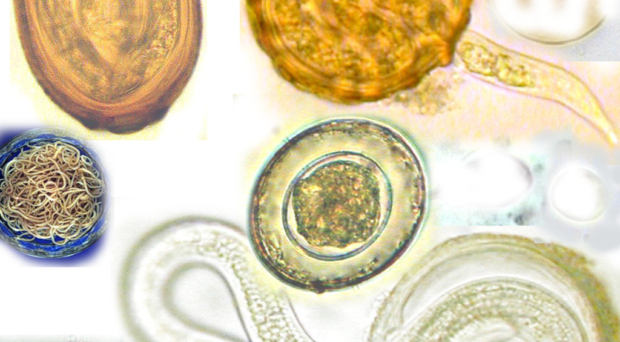 Roundworm and whipworm are known to have been prevalent across Medieval Europe, found in kings and queens as well as in individuals living in poverty. The reason for the high prevalence and distribution of roundworms and hookworms during this period is thought to be due to a) the poor sanitation and hygiene practices and infrastructure in household, towns and villages and b) the common practice of using human and animal waste to fertilize crops in fields.

But could different sanitation practices and infrastructures used in Medieval Europe have led to a difference in infection risk? A research group in Cambridge and Leicester used the recently excavated burial grounds of the Augustinian Friary in Cambridge to look at differences in helminth prevalence between the Augustinian friars and the local parish townspeople.

In medieval towns sanitation was primarily using cesspit toilets, i.e. a hole dug in the ground. Whereas in monasteries the sanitation system was more advanced, typically involving a raised cistern, where water was drawn down by gravity, and ran through channels which diverted water through working areas of the monastery including through the latrines. Augustinian friars tended to have better hygiene practices, with washing of hands and hand washing facilities being available in the monasteries unlike in the local population.

Another difference noted in monasteries is that friars and monks tended to have longer life expectancy than the general population, potentially due to the better nutrition and diet in monasteries.

This study looked at the prevalence of intestinal helminth infections in a population of Augustinian friars during the Medieval period and compared it to the prevalence found in the local townspeople over the same period to see if there is a difference between the two.

Researchers from the Department of Archaeology and Cambridge Archaeological Unit in Cambridge and the School of Archaeology in Leicester analysed specimens from individuals buried in two cemeteries, one of the cemeteries served the Augustinian friary (monastery), most burials were from 13th – 14th centuries, the other the local parish, All Saints by the Castle, predominantly used from 12th – 14th centuries.

The researchers collected pelvic sediment from soil around the sacrum bones of adults excavated from the two cemeteries, they weighed out 0.2g from each sample and prepared them for microscopy by using 0.5% trisodium phosphate to create a liquid suspension, vortexing to separate any aggregate particles and pouring the mixture through a series of microsieves to separate and trap helminth eggs. This was then collected in a tube and centrifuged at 4000rpm to concentrate any eggs, the supernatant was removed, and the samples were viewed on microscope slides with a few drops of glycerol. Eggs were identified and counted and eggs per gram calculated for each sample.

Sediment samples from the cranium and/or feet were also collected and processed as above to act as control samples.

Because these are soil specimens from old burials the researchers used the following criteria to determine whether presence of eggs indicated a genuine infection at time of death rather than soil contamination (to minimise false positives):

Surprisingly 11 of the 19 friars were positive for helminth infections whereas only 8 of the 25 townspeople were found to be positive. The helminths identified were Ascaris lumbricoides (in all infected individuals) and Trichuris trichiura (in one friar).

The researchers speculate that the reason for the higher helminth infection prevalence amongst Augustinian friars could be due to agricultural practices that involved using human and animal waste to fertilize crops grown in the monastery. This was a common practice in the medieval period, and groups that had the funds would buy the content of cesspits to use as fertiliser in their fields. Did the nourishing diet in the monasteries, potentially linked to reliable crops and to a longer life expectancy, come at the particular price of helminth infections?

Whatever the reasons this study has captured the attention of media channels with coverage from the BBC, CNN and Sky News.