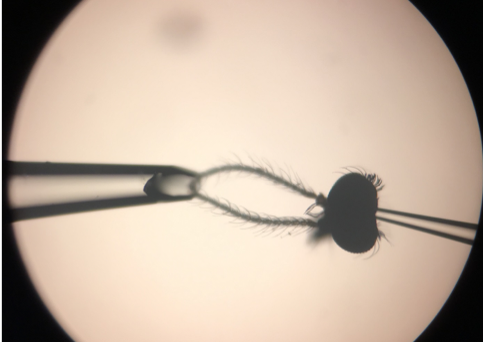 Since the early 1980s, investigators of vector-borne disease (infections that are transmitted by an arthropod) have been asking the question “Are infected hosts more attractive to the vector than uninfected hosts?” The answer appears to be a resounding yes. From early studies in animal malaria systems that showed increased mosquito feeding success on infected mice (1), to later studies showing mosquito host preference for infected over uninfected birds (2), and in recent years several studies of this phenomenon in human malaria (3,4,5), there is an expanding body of literature to support the hypothesis. Not restricted to malaria, evidence for this can also be seen in Leishmaniasis (6), Trypanosomiasis (Sleeping Sickness) (7) and the arbovirus Rift Valley Fever (8). The rationale that hypothesises such changes is simply natural selection operating on the parasite: those individuals that most successfully propagate the next generation, moving into the next stage of the parasite’s lifecycle (i.e. that within the vector), will be selected for alongside any genes that inadvertently favour this (i.e. by making their host more attractive).

We chose to study this phenomenon in naturally infected humans in malaria-endemic Western Kenya. Our goal was not only to re-enforce the finding of increased attractiveness, but then to investigate skin odour as a possible basis for this. Some changes in the composition of body odour in mice infected with the malaria parasites Plasmodium had previously been demonstrated, and we had also recently investigated the skin odour of people experimentally infected with P. falciparum. However, it is paramount to investigate transmission-associated phenomena in the natural context, as the complexity of parasite-vector-host interactions is impossible to fully replicate in an experimental setting.

To corroborate previous studies, we first assessed the attractiveness of skin odour of children harbouring malaria parasites and parasite-free individuals. Our study differed slightly from previous investigations, as we did not test whole body odour (which importantly includes breath). We found that the socks of children with any stage of malaria were more attractive to Anopheles gambiae s.s. than the socks of the same child after parasite clearance.

To conduct an in-depth analysis of skin odour, we used a technique called air entrainment. Here, the object under investigation is isolated in a chemically clean container or bag – we used oven bags around the children’s feet. Filtered air is then simultaneously pumped over the object and vacuumed off and through a polymer filter, which captures even tiny odour particles. These chemicals can later be washed from the filter and examined. After collecting many foot odour samples in this way, and at the same time measuring the density of parasites in each individual’s blood, we used a method called ‘gas chromatography-electroantennography’ (GC-EAG). Here, the mosquitoes’ antennae are essentially used as a detector system: by attaching tiny electrodes and exposing them to an odour, it is possible to amplify the electric response that is generated as nerve cells fire when the antennae detect an ‘exciting’ compound. We found approximately 20 compounds that Anopheles coluzzii consistently responded to in all odour samples, but we didn’t find any qualitative difference between odour samples from individuals with different parasite status.

Next, the air entrainment odour samples were examined across the entire ‘profile’ for chemicals that distinguished infection. The samples were analysed by gas chromatography – which essentially separates out a complex mixture of chemicals – and then compared according to parasite status. We found several compounds to be produced in greater amounts by the infected children. Excitingly, three compounds (aldehydes, below) increased according to the density of parasites in the blood. Further, these three were among the 20 compounds previously shown by GC-EAG to elicit a response in mosquitoes.

Finally, we tested the attractiveness of malaria-associated compounds to Anopheles mosquitoes. Finding infection-associated compounds was both exciting and important, however many pathologies of humans have been associated with particular odours. Disease and disorders can impose profound changes on human physiology, and it is not surprising that this could affect the chemicals that emit from our skin. Therefore, it was essential to follow up our GC-EAG work with behavioural studies. We tested all malaria-associated compounds, both individually and in blends, with ‘parasite-free odour’ (socks from children with no malaria) and with a synthetic lure called MB5 (which mimics the odour of a healthy human). We found that heptanal alone increased the attractiveness of parasite-free sock odour, and that a blend of all five malaria-associated aldehydes (“Plas5”) increased the attractiveness of MB5.

While it is yet to be demonstrated in a natural setting that those people with malaria and emitting malaria-associated compounds are bitten more by mosquitoes, we believe that the significance of these findings are threefold. Firstly, it is possible that this could profoundly affect the way that malaria spreads through populations, and our understanding of malaria transmission must develop to take this into account. Secondly, the Plas5/MB5 lure could be used to enhance already-effective odour-baited traps for mosquitoes. Finally, pending further investigation and development, it is possible that such malaria-associated compounds could act as biomarkers to signal infection and be used to aid diagnosis of the disease.