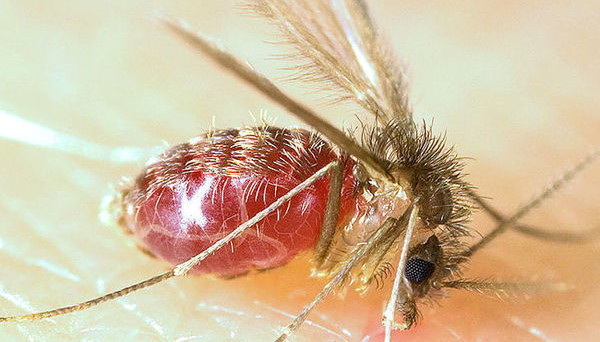 Serenading one’s potential mate is not behaviour confined to humans but is exhibited by many species, including insects.   As part of the process of mating it is believed to play a major role in successful copulation, with the wrong variation of a song creating a barrier to reproduction and thus isolating variants as part of the process of the creation of new species.

Male sandflies are one example of insects that sing to their mates. Several different insects are commonly known as sandflies but here I refer to members of the subfamily Phlebotominae. They are tiny, only about 1.3 to 3.5 mm in length, but have a vicious bite and their blood sucking habit makes them disease vectors.

The males produce their songs by beating their wings very quickly, either one at a time or both together. They sing when they are courting a female and also during copulation.

Lutzomyia longipalpis is a New World sandfly species, distributed from Northern Argentina to Southern Mexico and is a vector of Leishmania infantum, the causative agent of visceral leishmaniasis (also known as kala – azar).

Although all L. longipalpis sandflies look similar, investigation of behavioural traits and molecular variation suggest this is not the case. Some of the evidence for this being a species complex is based on the copulation songs of the males.

As early as the 1980s Richard Ward and colleagues recognised that reproductive barriers existed between some L. longipalpis populations and that it may actually be a complex of two species. It was further suggested that the distribution of these different forms may reflect the epidemiology of visceral leishmaniasis in South America. In Brazil, different patterns of virulence and clinical outcome are seen, with most cases of visceral leishmaniasis occurring in the North East of the country.

Richard’s initial work signalled the start of a series of studies of sandfly speciation that initially proved controversial, and the exact number of species within the complex is still uncertain.

One key observation was that the males produce a scent to attract females. These sex pheromones are released from glands on the abdomen and two distinct sex pheromones were identified, one-9-methyl-germacrene-B and one with a cembrene structure. Populations producing one type were reproductively isolated from those producing the other type.

In addition to scent, copulation songs also turned out to be an important feature that separated different populations. The copulation songs fell into two distinctive patterns, burst-type and pulse-type.

The importance of song

L. longipalpis song types were extensively analysed by Alexandre (Alex) Peixoto and colleagues. In 2004 they published a paper in which they reported that populations producing burst-like songs did not differ in their song pattern but the pulse-like songs were variable. In all, three different pulse-like songs were identified in populations from Brazil and they concluded that four sibling species existed in that country. Further work linked song type with pheromone production, and mating experiments showed that copulation between members of these different incipient species rarely occurred and any eggs laid were infertile.

The untimely death of Alex could have put an end to these investigations but Felipe Vigoder and others of his colleagues have carried on with the work. In their recent paper, published in Parasites and Vectors, they compare songs from 13 new populations with those from the 12 already studied.  Burst-type songs were much more common, with only 9 populations in total producing songs consisting of pulses of sound. Males producing burst-type copulation songs have all been shown to produce cembrene-1 pheromones.

They investigated this by placing a male and female sandfly in a small chamber equipped with a microphone and video. The flies connect end to end and after the male clasps the female with his genitalia he generally produces a primary and then a secondary song. Analysis was focussed on the primary songs, which were clear and consistent. Pulse and burst type songs are markedly distinguishable by sound and trace (see image and additional files of the recording from their original paper). Within a population, all males produced the same type of song pattern.

Using principal component analysis they confirmed the existence of two very distinct song patterns; pulse and bursts. Five quantitatively completely different patterns of pulse-type song were identified and individual males could be clearly assigned to one of these groups. In contrast, only one pattern of burst-type was observed and males from 10 different, newly sampled, locations all produced this song.

The authors suggest that song pattern is evolving faster than other parameters (probably because it is under sexual selection) with some element of the song likely being essential for successful insemination.

Populations with burst-type songs were mainly located along the coast and represent a single species. In contrast, five specific pulse-type songs were recognised; each indicative of a different cryptic species within the complex.

Richard Ward says I am delighted that Alex Peixotos group are continuing his work on the acoustic significance of sandfly copulation songs and their significance which has been and still is a vital component of understanding the complex dynamics of the speciation of the Lutzomyia longipalpis species complex.

The number of proposed L. longipalpis species has thus risen to six and this complex situation begins to resemble that of the species complex of a major malaria vector in Africa, the mosquito Anopheles gambiae.

Sandfly love songs are useful traits for identifying cryptic species even though it is not yet clear exactly how they contribute to creating reproductive isolation. It remains to be seen whether members of the complex really do differ in their vectorial capacity to transmit leishmaniasis.

Really enjoyed the succinct and simply way you managed to explain the confusion that is the Longipalpis complex.

It is with much sadness that we have to share the news of the loss of our dear colleague Richard Ward who died on 27th October. He will be greatly missed.