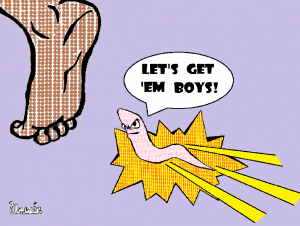 Worms that burrow into your skin are the stuff that nightmares are made of, yet approximately one billion people across the globe are infected with parasitic round worms that enter the body this way. They belong to a group of parasites known as soil-transmitted helminths and their tiny infective larvae have developed sophisticated foraging strategies that are appropriate for their specific hosts; either cruising in search of hosts or waiting to ambush them and using olfactory cues produced by their hosts.

Strongyloides stercoralis is a skin-penetration nematode that infects humans and causes strongyloidiasis.

It has a global distribution but is most common in rural areas of the tropics and semi tropics in communities where sanitation is poor and faecal material can contaminate the ground or the water supply. In the US, outbreaks of strongiloidiasis have been associated with institutionalised populations and veterans returning from tropical regions. Behaviours that put people in endemic areas at risk include walking bare foot, coming into contact with human faecal material and occupations such as farming and mining. The larvae can also be transmitted by textiles such a bed clothing or even in shower cubicles.

After penetrating the skin, the infective larvae are carried in the blood stream to the lungs. They are then coughed up into the throat and swallowed. They burrow into the lining of the small intestine and moult twice to become adult females.  Female worms in the intestine produce eggs without the need to mate, a phenomenon known as parthenogenesis. These eggs hatch in the small intestine and the larvae are expelled with the faeces. They can then pass through 2 moults to produce infective juveniles, the skin-penetrating stage, or develop into free living adults, mate and produce eggs that eventually give rise to infective juveniles.

S. stercoralis has a particularly complex life cycle as it can also give rise to autoinfections lasting many years. This happens if larvae that have hatched from eggs in the small intestine penetrate the intestinal mucosa, enter the blood stream and undergo the same journey through the lungs as their mothers did.

Michelle Castelletto, Elissa Hallem and colleagues have recently published the results of a comprehensive study comparing the diverse strategies that some of these soil transmitted helminths use to find their hosts. Their experimental work was focused on Str. stercoralis, and two rat parasites, Strongyloides ratti and Nippostrongylus brasiliensis and compared their host-seeking behaviour with two nematodes that actively invade insects (entomopathogenic), one that is passively ingested by sheep or goats (Haemonchus contortus) and the free living Caenorhabditis elegans.

By watching infective larvae placed on agar plates they were able to identify the well characterised host seeking strategy known as cruising; the human parasite being the most active and having a higher basal speed that the others. The crawling speed of this skin-penetrating nematode increased significantly at 37°C and movement tracks changed from being straight to being highly curved. In contrast, the passively ingested nematode deployed an ambush strategy, was far less active than the skin-penetrating nematodes and did not respond to thermal stimulation.

These researchers suggest crawling behaviour is adapted to the behaviour of the specific hosts; infection of rodents would occur near the host’s nests, thus requiring less mobility, whilst rapid mobility may be required to infect highly mobile humans and, being passively ingested, host seeking activity was not required of H. contortus.

Some nematode larvae are known to stand on their tails and wave their heads in the air to facilitate attempts to attach to passing hosts, a behaviour known as nictation (seen in the video of C. elegans in this link). The actively invading, Steinemema carpocapsae, an entomopathic nematode with ambushing behaviour, had a higher nictation frequency than the Strongyloides species and H. contortus did not display this behaviour at all.

A chemotaxis assay testing 36 different odourants showed that Str. stercoralis was attracted to an array of human skin and sweat odours which also attracted human-biting mosquitoes, whereas CO2 was not found to be an attractant. Responses by 6 other species appeared to suggest they responded to specific host cues.

Interestingly, H. contortus was attracted to the smell of grass and CO2 that would be present in host breath and repelled by many skins and sweat odourants. The first and second stage larvae of this nematode feed on bacteria in dung and, as the life cycle proceeds they migrate away from the faeces to positions where they may be accidentally ingested by sheep or goats that are grazing on pastures. Thus response to a different set of odourants to Str. stercoralis is likely to favour successful ingestion rather than skin penetration.

Finally, larvae and adult worms in the free living alternate phase of the life cycle of Str. stercoralis were strongly attracted to the odour of host faeces, where they reside, but the infective, skin-penetrating juveniles were not.

The authors acknowledge that the behaviours they recorded may be substrate dependent and could vary if the infective larvae were monitored on different substrates. However, they conclude that similarity of foraging behaviour and response to odourants seems to reflect host specificity rather than how closely related the different species of nematodes were.

If you want to avoid cruising worms encountering your bare feet when travelling in endemic areas the best thing to do is to foil their host seeking behaviour by wearing robust sandals or shoes.

Hello Hilary.
I have a very great suspicion I have these skin-penetrating nematode in my back garden
at Weston Super Mare, uk. I was very interested in you information, but was unable to find out how to kill them. My dog and I have been mentally disturbed by these things since Mid Dec 2016. The doctors are baffled as are the vets. However since reading this I realised I bought the dog from an Indian Asian family. How do I kill them. Jill

interesting info unable to locate info regarding inch worms though i have concerns i have green inch worms infested in my 100yr old chinese elm tree i have found these worms in my hair,skin and once wiped the inner corner of my eye and a tiny green matter resembling the inch was found on my finger i am having recent health problems i need some input

MEBENDAZOLE is good for parasites. Go to doctor.

Inch worms are the larvae (caterpillars) of geometer moths and do not infect humans or other animals.