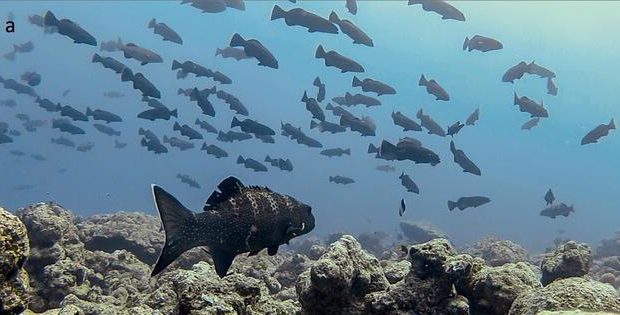 Fishing for a unique behaviour

How well do we understand fish behaviour? Many fish species, in many habitats, have been extensively studied. Yet with the increasing impact of fishing and other human activities on the marine environment, we can question how much natural behaviour that would be observed in pristine environments has vanished from the areas we are actually able to study.

Take fish mating behaviour. The classic pattern is of male and female fish gathering at spawning grounds, females releasing their eggs directly into the water, and males releasing their sperm to fertilise these eggs. Beyond these basic behaviours however, fish utilise a huge range of mating strategies, with individuals within a single species flexibly using different tactics depending on the situation and their own status.

How fish behave during mating will often depend on the density at which they gather at spawning grounds, with some mating tactics only seen when a considerable number of females have aggregated. Given how increasingly rare pristine spawning grounds are – especially for large, commercially fished species – we have to question how much mating behaviour we never see because these exploited species are never able to gather in sufficiently large numbers.

This makes research conducted on spawning aggregations in un-fished areas – if they can still be found – especially valuable, providing a critical opportunity to observe baseline behavior and determine what impact overfishing is having on natural mating practices.

This is what the authors of an article recently published in BMC Ecology were able to achieve. The researchers, led by Rucha Karkarey at the Nature Conservation Foundation in India, studied the squaretail grouper; a common species on coral reefs across the Indo-Pacific, very well studied, but heavily exploited by fisheries. With considerable effort, the researchers located an un-fished, pristine spawning ground and observed new mating behaviors never seen before.

The research was conducted on Bitra, one of the most remote islands of the Lakshadweep archipelago, itself located a remote 400km south-west of the Indian coast. Bitra is a tiny island, home to just over 200 people, but crucially is surrounded by a substantial coral reef. Traditionally, local fishing has only been an artisanal enterprise, so the researchers hoped there was a good chance Bitra could be the place to observe an ‘untouched’ spawning aggregation of the squaretail grouper.

Working on such a remote island was not without its challenges. The logistics of travelling to such a remote place and the difficulties of surveying the reefs meant it was several years before the researchers determined when the squaretail grouper gather to spawn.

Across the Indo-Pacific region, grouper spawn on the day of either the new moon or the full moon, depending on location and species. After several years of opportunistic surveys, and much questioning of local fishermen, the researchers determined that the new moon in January was when squaretailed groupers would gather in the largest numbers.

Armed with this intelligence, the researchers set out to survey the reefs during the new moon of January in 2013 and 2014, hoping to see behavior never observed before.

Male grouper arrived at the spawning site up to three days before the new moon in order to establish territories. Females, easily distinguishable from males by their distended bellies, arrived the day prior to the new moon in large schools of 150-200 fish. After their arrival, the researchers surveyed the breeding ground through snorkelling and scuba diving, observing and videoing mating behaviours. As they had hoped, the grouper aggregation was substantial, containing the highest densities ever recorded for this species.

Males made their territories on two types of habitat, either the slope of the reef or the reef shelf. Large males were much more common on the slope, with smaller males more likely to make their territories on the shelf; given the fierce competition between males to establish and defend territories, this implies that the reef slope provides the best mating grounds. Perhaps unsurprisingly then, the majority of females gathered on the slope, where fish density was approx. six times higher than on the shelf.

It wasn’t just who the fish chose to mate with that surprised the researchers; how they mated was unusual as well. The ‘classic’ squaretail grouper mating behaviour, commonly observed in other locations, is pair spawning. Here, a female will break away from her larger school and visit a male’s territory. The male courts her by approaching with a quivering motion, followed by a display of the underside of his body. If she’s impressed, the pair will release their eggs and sperm in a ‘spawning rush’ just above the male’s territory.

In the large mating aggregations on the reefs around Bitra, the researchers also observed a second, never before seen, mating behaviour which they term ‘school-courtship’. Here, males made regular forays into the water above their territories, courting multiple females in a school before rapidly returning to their territory. This is distinct to the usual pair spawning in that it took place outside the male’s territory and involved a single male mating simultaneously with multiple females.

Use of the school-courtship strategy was very dependent on the size of a male and the location of its territory; only larger males with territories on the reef slope were observed using this novel tactic. For these males the tactic was highly successful, as they associated with three times more females than males using pair-courtship tactics. It came with a cost though; these males spent almost quadruple the time engaging in aggressive behaviour with other males to defend their territories. This newly discovered mating behavior seems to be very much a high-risk-high-reward tactic.

The above video shows an example of the unique school-spawning behavior. In the foreground, a male guards his territory in ‘traditional’ style. To the left, in the background, another male can be seen leaving his territory to make a foray into the school of females above. The male is seen courting multiple females in the school, followed by a sudden upward spawning rush between the male and 4–5 females from the school, proceeded by a release of gametes.

And now the sting to this tale. During the course of their investigations, the researchers noted that a nascent but troubling commercial fishing industry had appeared on the reefs around Bitra. While not specifically targeting grouper, such an increase in fishing pressure clearly presents a threat to their breeding aggregations.

Sure enough, the researcher’s most recent data from 2015 and 2016 found an alarming 50% decline in peak aggregation compared to 2013 levels. Surveying the breeding schools in 2016 they were unable to observe a single instance of the novel school courtship behaviour. Is this unique behaviour to become extinct almost as soon as we have learnt of it?

Beyond the specific case of the squaretail grouper, these findings raise a wider concern about the perils of overfishing. Even if commercially exploited species are able to survive with sustainable populations (a big if for many species) we may still be eliminating unique and important behaviors that can only exist when fish are able to gather in large densities.

This could have potentially substantial effects on these species. In the squaretail grouper, the novel school-courtship behaviour is only used by the ‘best’ males (i.e. the largest individuals, able to obtain the best territories) and potentially substantially increases their mating success. This suggests that its elimination in overfished populations could have significant effects on the future demographics and evolution of the species. Even aside from this, isn’t there something tragic about seeing such unique and fascinating behaviour, the product of countless years of evolution, disappear from our oceans?

There is hope for the Bitra squaretail grouper. The researchers have presented their findings to the local community and sought their support in protecting the grouper. The response has been positive, with many even expressing a local pride that their island hosts an apparently unique natural phenomenon. With the cooperation of the Lakshadweep Fisheries Department and Administration they are attempting to establish a reserve that will ban commercial fishing in the grouper breeding areas in the few days around the January new moon. If these efforts are successful then perhaps the squaretail grouper will continue to display the full variety of their natural behaviour in at least one part of our vast oceans.