As preparations were underway in Northern Ireland for the 39th G8 summit, science ministers from the G8 nations met with their national science academies to discuss the most pressing issues in research facing scientists across the globe.

Their recommendations will be put to the G8 leaders during talks today and tomorrow. Among them are decisive actions required to make scientific research more open and more accessible.

In a statement released on June 13, the group note that: ‘Open enquiry is at the heart of scientific endeavour, and rapid technological change has profound implications for the way that science is both conducted and its results communicated’. They go on to state their support for a clear set of principles for more open data, including that publicly funded research data should be made open, and that open data by definition should be easily discoverable, accessible and assessable. 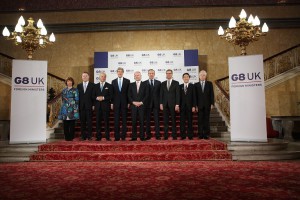 Crucially, this set of principles acknowledges the need for open data to be written into government policy to ensure universal adoption, and for that policy to take into account the need for rewards and recognition for researchers opening up their data, and a digital infrastructure to support this data sharing. International collaboration will be essential to make this a global reality.

The G8 science ministers also made clear the importance of access to scientific research. This comes in the wake of steps taken in UK government policy (Universities Minister David Willets has mandated that all publicly funded research be published in gold or green open access venues) and wider lobbying from key figures in the research community. In the statement for G8 leaders, science ministers have outlined their main goals in relation to accessible research, highlighting the importance of peer review and the role of publishers and learned societies. The statement also reiterates the findings of the UK’s Finch Report of last year, namely that making publicly funded, peer-reviewed, published scientific research increasingly accessible will ‘accelerate research, drive innovation, and benefit the economy.’ The statement concludes that:

Access to research and data has risen to the top of science policy agendas in recent years. BioMed Central was an open access pioneer when founded in 2000, but over the last five years the number of open access publishers and journals has boomed. Our growing portfolio of journals has seen submissions increase year on year as more researchers seek to publish their results in open access journals, ensuring their work is not only widely seen but also has the potential to be built upon through further analysis and investigation.

To accommodate for the greater demand for data sharing alongside article publication we have developed a number of innovative journals and partnerships. From GigaScience, the big data genomics journal published in collaboration with the BGI, which hosts a database alongside the journal itself, to an agreement with LabArchives that allows BioMed Central authors up to 100 MB of free storage in an online ‘notebook’ for research associated data. A number of our journals, including our broad scope, inclusive journal BMC Research Notes, also provide a novel article type – a data note – that allows authors to submit data sets (either as associated files or via a link to an accessible deposition in a data repository) with a short accompanying report, separate to a full results article.

One area in particular that is receiving increasing attention, and loud calls for greater openness is clinical trial research. The AllTrials initiative was founded early in 2013, and, although UK based, has international scope and ambitions. The campaign calls on governments to demand that all clinical trial research be published, and clinical trial data made publicly available within the constraints of ensuring anonymity of sensitive medical information. The campaign is supported by a number of publishers, societies and institutions, including the BMJ (co-founders of the initiative), BioMed Central, the Wellcome Trust, and GalxoSmith Kline. The campaign also has support from the European Patients Forum, which comprises 61 member bodies and over 150 million members, signalling the strengthening call from the public for transparency and accountability in the reporting of scientific research, especially that funded by public money.

The statement from the G8 science ministers is a step toward recognising this shift in public opinion and research demands, and, depending on the outcomes of the G8 summit this week, could kick start an international movement in opening up research and sharing data.

[…] In June the science ministers of the G8 nations met to discuss how they could improve the transparency, coherence and coordination of global scientific research. The group recognised the importance of open access and open data in making research more transparent, and put their recommendations to the leaders of the G8 nations during the following G8 summit. This is just one example of a growing trend of governments supporting open access to publically funded research. We wrote about this in more detail last month and you can also find out more from the BioMed Central blog. […]