Human immunodeficiency virus-1 (HIV-1) attacks human cells by binding to a CD4 receptor and then interacting which another receptor, CCR5. The latter has been identified a while ago already as a potential therapeutic target in HIV-1 patients: turns out that individuals with homozygotic deletion of a 32bp fragment of the CCR5 gene are resistant to the viral advance.

In 2014 The New England of Medicine published a study demonstrating probably the first clinical trial of genome editing-based therapy: an application of zinc finger nucleases to modify autologous CD4+ cells, delete the feral 32bp region of CCR5, and transplant them back into the 12 enrolled HIV-1 patients.

While the results were mixed – the study was primarily designed to test the feasibility of such therapy and looked only at induced partial genetic resistance – it showed one thing: that genome editing is a viable, if still largely underdeveloped, therapeutic option.

HIV-1 is, together with a handful of other diseases, a prime candidate for gene therapy treatment, because only one gene modification is needed for therapy to be effective. While simultaneous editing of multiple genes is possible, especially using CRISPR/Cas system, it is presently highly inefficient, and the CRISPR/Cas system is still not specific enough for us to feel comfortable using it in human-based studies without more thought.

No monkeying around in the human germline

That is not to say that genome editing tools don’t find applications in biomedical research. In 2014, researchers from BGI Shenzen described genetically modified micropigs, created using TALEN technology, which were designed as human disease models. While still a helpful medical model, micropigs turned out to be a different type of interesting commercial opportunity for the BGI: the Institute announced earlier this year that the animals will be also sold as pets.

Application in pigs stays high on the genome-editing development agenda; and for a good reason: pigs are a valuable model for many human diseases, and with their physiology being somewhat similar to humans and their organs just the right size – they remain the best candidate for xenotransplantation. The efforts to use pig organs for transplants have, however, been long hampered by the seemingly irresolvable human-pig differences: the presence of dangerous species-specific endogenous retroviruses.

Only last month though, George Church’s group at Harvard addressed this issue in the most spectacular development. Researchers demonstrated simultaneous targeting and disruption of over 60 porcine endogenous retrovirus genes – the number of targets that will not only be a tough record to break, but even to get anywhere close to again. The study was a porcine cells-based proof-of-principle, but showed that genome editing may be an answer to the issues troubling the field of xenotransplantation.

Pigs are, of course, not the only animals, in which genome editing techniques have been applied: in the last few years we have seen genome-edited insects (most recently butterflies), fishes, all sorts of worms and bacteria, dogs, and macaques. While in humans genome editing has been attempted in vitro, whole human editing – by the virtue of germline editing – is still a taboo. Earlier this year several groups of scientists expressed different levels of concern: starting with the Napa group, who called for more discussion, through a small group of scientists who appealed to the community for a moratorium on germline editing work, to the NIH director who emphasized that the NIH will not fund such research, and in any case existing legislation prevents the Institutes from supporting this type of research.

And so if there is one thing that we have learned so far about the genome-editing technology, it is that in many areas it does push the legislative borders, and that for many regulatory bodies these techniques will remain a nuisance for years to come. A similarly interesting, though perhaps less ethically disturbing, example comes from the field of plant biology.

How to trick the lawmakers

Genetically modified crops are most often created using a bacterium – Agrobacterium tumefaciens – which delivers the molecular gene-modifying machinery to the plant cell. Techniques used for gene modification in pre-genome editing era worked in a very unspecific, imprecise way. Plant genome would be modified in many random places. As such, genetically modified plants would be easy to identify using genome sequencing – we would just need to find all those random modifications in the genome to show that something’s cooking.

Genome-editing tools changed this: since they allow a very precise gene modification, a modified plant will not (theoretically speaking at least) have any randomly introduced pieces of DNA that could reveal its modification. But the modified plant can actually still be identified using sequencing. The reason for this is the Agrobacterium – the bacteria, when building the DNA it transports into the plant genome, leaves also bits of its own DNA, so called T-DNA, which can still be used as genome-editing bread crumbs.

While T-DNA can be removed by breeding, it is not necessarily possible for many crops that reproduce asexually, such as bananas or potatoes, and is quite laborious for other plants. It is easy to imagine this may be quite a relief to many European Union legislators, notoriously strict about the GMO regulations.

As of two weeks ago, however, plant breeders have another tool that may mean that in the future we will simply not be able to tell if the plant is or isn’t genetically modified. In October Nature Biotechnology published an article from the group of Jin-Soo Kim that describes a new DNA-free method for plant genome editing.

Because this method introduces all relevant pieces of editing toolkit into cell in a protein form, no foreign bacterial DNA is brought anywhere close to the plant itself. With no bacterial fingerprint in the plant, a new GMO definition-defying loophole has been created.

And so we begin 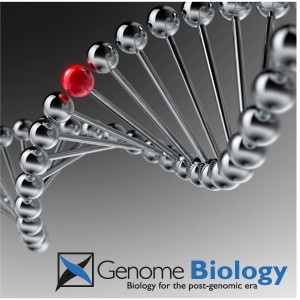 Genome-editing technologies created a brave new world. The challenges we face simply because of their mere existence are huge – but the promises and opportunities are even greater. Genome Biology highlights this burgeoning field with a special issue that covers new developments in the field of genome editing, novel applications, useful tools and more. Together with the issue Guest Editors, Jennifer Doudna and Charles Gersbach, we invite you to have a peek…

This is one of the developments that can really bring awesome transformations. Scientific testings are being done from time to time and genome editing can bring changes that will make the process more efficient and successful. Thanks for sharing!