In 2013, BioMed Central's blog and Biome magazine have dedicated quite some space to considering alternative models of peer review.

One emerging approach is to reverse the traditional order of scientific evaluation by publishing first and peer reviewing later. Arguments in favor of this model include the crowdsourcing‑ization of peer review, in which the wisdom of crowds may replace the arbitrary selection of two or three referees, and the 'floating to the top' of the strongest studies, as these are expected to attract the most recommendations.

In common with other models of open peer review, such as those operated by BioMed Central medical journals and Biology Direct (a personal highlight: 'There is an infinite number of worlds that are incomparably better, even those where Elvis is still alive. Thus, I believe I am relegating Dr. Pangloss to irrelevance.'), the openness of comments should also help inform readers as to the strengths and weaknesses of a study, as well as appraise them of background context and potential controversies.

A hybrid between the publish first and traditional models is the Faculty of 1000 (F1000), which enlists a 'faculty' of 1000s of active researchers to select articles from the literature and provide post-publication open peer review. Curious to test the value of these reviews, I decided to let F1000's reviewers select Genome Biology's highlights of 2013, and to revisit with them what every reader should know about the studies in hand.

F1000 reviewers Mark Ragan and Cheong Xin Chan note that 'the authors convincingly demonstrate the contribution of LGT to the adaptation to a parasitic lifestyle, and the tendency of LGT to occur among taxa that share a habitat or environmental niche'. Commenting on how the new findings advance the field, the reviewers conclude that 'the impact of LGT on the maintenance of metabolic pathways in microbial parasites has until now been underestimated'.

Another F1000 reviewer, Adrian Hehl, points out that gene transfer from the environmental microbiome, as is reported in the study, is much harder to identify than transfers from plastid genomes. But he believes that lateral gene transfer is now emerging as 'a major mechanism of eukaryotic genome evolution'.

p53 profundity
In April, Reuven Agami and colleagues at the Netherlands Cancer Institute used RNA sequencing and ribosomal profiling to study cells under various physiological conditions: normal proliferation, quiescence, pre-senescence, senescence and neoplastic transformation. Their findings caught the attention of F1000 reviewer Jonathan Warner: 'This paper stands out because it has led to a clear demarcation of differential effects on different classes of genes. It's pretty simple: activation of p53 profoundly inhibits the translation of mRNAs encoding ribosomal proteins and translation factors, and profoundly represses the transcription of cell cycle and ribosome assembly genes.' 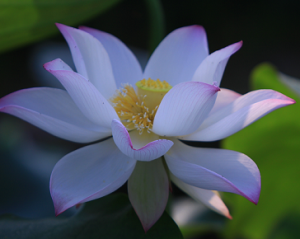 The life aquatic
In May, an international consortium of plant genomics enthusiasts reported the genome of Nelumbo nucifera, more commonly known as the sacred lotus. F1000 reviewers Dirk Hincha and Yves Van de Peer both praise the 'high quality and coverage' of the sequence and are interested in evidence for 'specific adaptations to life in an aquatic environment', as well as for a lineage-specific genome duplication.

Van de Peer notes that the proposed dating of the duplication event, at 65 MYA, is 'particularly interesting if true'. The reason? 'This would add another species to the growing list of plant lineages that seem to have undergone a whole genome duplication event around the Cretaceous-Tertiary mass extinction. Polyploidization has been associated with increased adaptation and reduced extinction and may also have played a crucial role in the survival of (the ancestor of) the lotus.'

For F1000 reviewers Dario Leister and Tatjana Kleine, the method is a 'must-read' paper for anyone planning to use next-generation sequencing-based forward genetics to map mutants in Arabidopsis – saving 'non-mathematicians' the headache of trying to determine appropriate experimental settings.

An exercise in excystation
In July, Upinder Singh (Stanford University) and Neil Hall (University of Liverpool) reported the genome and transcriptome of Entamoeba invadens, a reptilian pathogen that serves as a model for encystation and excystation by the human pathogen Entamoeba histolytica (a potentially fatal parasite thought to infect 50 million people). F1000 reviewer Graham Clark draws attention to the finding that meiosis may take place in the cyst, which he cautions will be controversial, and to the pinpointing of phospholipase D as a likely regulator of encystation.

Dissent!
In October, Steve Horvath (UCLA) used a large-scale analysis of publicly available data to build a highly accurate predictor of age based solely on DNA methylation values (specifically those of 353 CpG sites on the popular Illumina Infinium array), and to study how what one might term 'DNA methylation aging' relates to human disease.

While at Genome Biology we mused on the potential of the study to make forensic crime TV shows more interesting, F1000 reviewer Christopher Janetopoulos is more struck by its promise to inform research in developmental biology, aging and cancer. Janetopoulos highlights the finding that 'the biological clock is not constant and ticks quite rapidly when we are born and then levels off in our 20s'.

But F1000 reviewer Jerry Shay is less impressed, voicing a dissenting view that 'it is unclear what is really novel here except the volume and size of the data analyzed' and bemoaning the lack of mechanistic insights.

[…] to produce author and article-level metrics. Elsewhere on the web, the journal Genome Biology has used F1000Prime scores to explore its most important papers, and Prof. Corey Bradshaw has highlighted important papers in conservation research published in […]