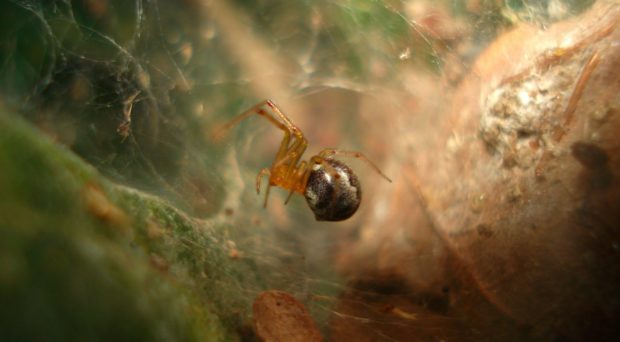 Pet owners will recognize that their animals exhibit substantial individual differences in behavior. For example, some dogs are curious and independent when they visit a new place, while others are timid and watch their owners’ reactions. Researchers studying animal behavior now understand that such differences among individuals of the same species, sometimes called ‘animal personalities’, are common and shape how individuals interact with their environment.

Readers might be surprised to learn that, despite their diminutive size, spiders have been the focus of intensive study on such variation in animal personality.  Some spider species exhibit a suite of coordinated behavioral traits that vary among individuals but are remarkably consistent within a given individual over time. These behaviors generally fall along a continuum between ‘boldness’ and ‘shyness’. Bold individuals recover quickly from feigned attacks and have a short latency to attack a newly entangled prey item, while shy individuals tend to play dead for longer and take more time before attacking prey.

Over the past decade, these personality traits have been investigated in a variety of ecological and social contexts in spiders of the genus Anelosimus. Although previous multi-generational studies provided evidence that some personality traits are likely to be passed from parents to offspring, we lacked an understanding of the genetic basis of these complex behavioral traits. Even beyond spiders, studies of the genetics of behavioral traits lag behind those investigating physical traits, such as coloration. There are several reasons for this. First, measuring behaviors is challenging since it must be done with living organisms. Second, researchers expect that behaviors will be shaped by both genes and the previous experience of each individual, so there is unlikely to be a perfect association between genetic variation and behavioral traits. Finally, given the complexity of many behavioral traits, we expect them to be influenced by multiple genes, and our ability to detect such a pattern is limited.

Spiders exhibit behaviors that are consistent in each individual over time.

Today, advances in genomics facilitate genetic association studies in organisms that have not been the focus of previous genetic research. To use these emerging tools, Jonathan Pruitt and I sampled spiders along rivers and lakes in eastern Tennessee. We used standard behavioral assays, called ‘startle tests’, to determine the recovery time of each individual after a disturbance (in this instance, puffs of air applied to the spider’s body). Individuals that moved very quickly after this treatment were considered to be bold, while those that played dead for several minutes were considered to be shy. Since this species dwells either in multi-female social groups or in solitary nests in this environment, we also noted the social structure of each source colony. Pruitt and his colleagues previously demonstrated that social groups are comprised of both bold and shy individuals, so these two variables (sociality and boldness) were considered separately. After we scored these behavioral traits, we used double digest restriction site associated DNA sequencing (or ddRADseq) to sequence approximately 0.1% of the genome of each of more than 200 spiders. In parallel, we sequenced and assembled the whole genome of one individual. Although the genome assembly remains highly fragmented due to challenging characteristics of spider genomes, including large size and high content of repetitive DNA sequences, this genome helped us to determine the relative positions of our ddRADseq markers.

Ultimately, we identified a cluster of seven genetic markers that were associated with boldness in spiders. At each marker, individuals carrying two copies of one sequence (= homozygotes) tend to be bolder, while those homozygous for the other sequence tend to be shier. Heterozygous individuals (in other words, those with one copy of each sequence) tend to exhibit an intermediate recovery time. These markers are associated with one another, and this region of the genome explains 11% of variation in boldness.

Genetic markers link to each other to shape the individual ‘personality’ of each animal.

This indicates that this genomic region has a pronounced effect on personality, but also suggests that this is not the only portion of the genome that influences personality. We do not yet know whether these markers are within a gene, or whether this genomic region instead influences gene regulation. We did not find any marker associated with the social structure of each individual. For both social structure and personality, our genome scan likely missed interesting variation, since we only surveyed a portion of each individual’s genome.

Nevertheless, the discovery of a genetic basis for personality traits in spiders opens up a variety of new research directions. Characterizing the genes near the newly identified genomic region and investigating their function will start to reveal how they shape behavior. At the level of the organism, we can measure how each genetic variant influences the success of individuals and groups. At the population level, we can investigate the mechanisms that maintain this genetic variation.

Overall, this study takes an exciting first step toward merging contemporary animal behavior and genetics research in this widespread and fascinating species. More broadly, this discovery helps open the door to understanding animal personality in a broader group of organisms, since the phenomenon is so pervasive in animals. Jessica Purcell is an Assistant Professor of entomology at the University of California, Riverside.She uses an integrative approach spanning evolutionary ecology, biogeography, behavior, and genomics to investigate the stunning evolutionary transitions in social organization that have occurred in many arthropod groups.She began this pursuit by studying the underpinnings of solitary and social lifestyles in Amazonian Anelosimus spiders, and has since broadened her research scope to investigate variation in ants and wasps.