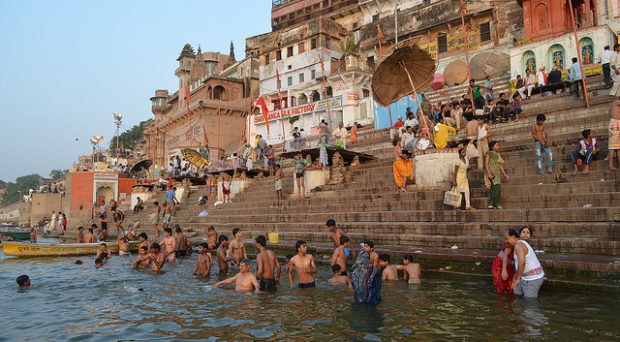 Last week, India’s National Green Tribunal issued new, strict regulations aimed at cleaning up one of the most the polluted rivers in the world – the Ganges, or Ganga in the vernacular. According to Indian mythology, the Mother Ganges is a goddess who long ago descended from the sky to resurrect the ashes of an ancient king’s ancestors. Any Hindu who dips in or drinks from her is freed from a great deal of karmic debt. Furthermore, anyone whose  remains are scattered in her escapes immediately from the cycle of reincarnation. She is also the most respectful resting place for the carcasses of cows.

Providing a water source for an estimated 400 million people, the river is home to industrial waste, sewage and human and animal remains which pose significant threats to human health. Hinduism beliefs about the holiness of the water are powerful enough to neutralise any warnings of health risks, making any public health interventions even more challenging.

Last week’s announcement is not the first time attempts have been made at cleaning up the river. Shortly after Narendra Modi became India’s prime minister in 2014, he pledged to lead efforts to reduce pollution by building more treatment plants and moving more than 400 tanneries away from the river. But that estimated $3 billion clean-up plan has never come to fruition.

The new regulations announced last week state that no waste can be dumped within half a kilometre of the river’s edge, and that any littering of any sort will invoke an instant fine of 50,000 rupees.  No construction will be allowed within 100 meters of the river and 456 tannery units, which release effluent into the water, should be moved away from the river within the next six weeks. If they are not relocated, they will be closed down.

While the Ganges may be considered holy, major health risks are transmitted to the human population either by direct bathing in the dirty water or by drinking. Fecal coliform counts in the water are dangerously high and disease risks include hepatitis, typhoid, cholera, amoebic dysentery and a variety of skin afflictions.

In 2015, there were an estimated 1.3 billion people at risk for cholera in 69 countries classified as cholera-endemic, with India being among the countries with the highest number of people at risk.  Cholera is an infection of the small intestine by some strains of the bacterium Vibrio cholerae. During the 19th century, the disease spread across the world from its original reservoir in the Ganges delta.  It is raising its head again in India this year and experts predict the disease will only become more frequent due to the added effects of climate change. If people with cholera are treated quickly and properly, the mortality rate is less than 1%; however, for certain genetic strains of cholera, such as the one present during the 2004 outbreak in India, death can occur within a mere two hours of becoming ill.

Dysentery is a type of gastroenteritis that results in diarrhea with blood. Like cholera, dysentery is spread by fecal contamination of food and water and is usually prevalent in areas with poor sanitation. Worldwide, approximately 140 million people develop dysentery each year, and about 600,000 die.  Over 60 percent of these fatalities are children under 5 years old in developing countries. There are two main types of the disease: bacillary dysentery and amebic dysentery.  The latter is carried by the river Ganges and is caused by Entamoeba histolytica, an ameba.  In areas of poor sanitation, the ameba can contaminate food and water and, as they can survive for long periods outside the body, infect other humans. They can also linger on people’s hands after using the bathroom, implying that good hygiene can reduce the risk of spreading infection.

Typhoid occurs predominantly in association with poor sanitation and lack of clean drinking water.  It is a life-threatening illness caused by the bacterium Salmonella typhi and can spread throughout the body, affecting many organs. It is an important public health challenge for India where it is most common, particularly among young children and especially with the spread of antimicrobial resistance. Typhoid can easily be prevented by following simple rules including proper hygiene and sanitation and persistent hand washing.

In 2008, the river also led to the development of water-borne superbugs – New Delhi metallo-beta-lactamase (NDM)-1 and NDM-4 which spread at an alarming rate, leading to a warning sparked by the World Health Organization two years later. Not only is waste contaminating the river’s water and leading to disease risk but it is also assisting in the proliferation of antibiotic resistance.

Contaminated water causes millions of cases of these diseases every year. Results of epidemiological studies assessing the relationship between the quality of water supply and sanitation versus human health vary widely and there are severe methodological difficulties involved in undertaking such studies.  One of the main reasons for these difficulties is that the fecal-oral route includes multiple routes for infection. However, there is sufficient evidence to support the conclusion that key to controlling these diseases is improved sanitation, the provision of clean water and the installation and maintenance of proper sewage systems or treatment facilities.

If you are interested in reading more on this topic, please visit BMC Public Health. The journal welcomes submissions on the epidemiology and environmental correlates of infectious disease.  Related papers can be submitted to the journal here.