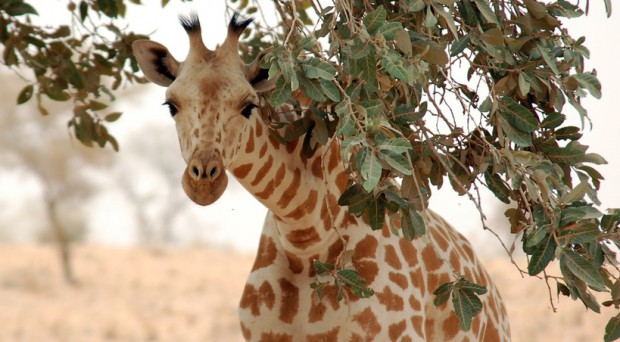 The sound of the giraffe

“A lion roars, a dog barks, an elephant trumpets, but what does a giraffe sound like?”. So goes the opening sentence of the new research paper by Angela Stoeger and colleagues from the University of Vienna. While this might sound like a line from a children’s book, it sums up our knowledge of vocal communication in giraffes: no one knows if such a thing exists.

Undoubtedly, giraffes are far less vocal than many other related mammals. To the casual human observer giraffes, whether in a zoo or in the wild, appear to be silent. Indeed there have been suggestions that the giraffe’s iconic long neck makes vocalisation physically impossible, due to the difficulty of sustaining the required air flow from lungs to mouth over such a distance.

Others however have suggested that, while clearly rare, giraffes do communicate vocally. They have been anecdotally described to “bleat”, “brrr”, “burst”, “cough”, “growl”, “grunt”, “low” “moan”, “moo”, “sneeze”, “snore” and/or “snort”.

Example of a giraffe ‘burst’

Example of a giraffe ‘grunt’

Moreover, recent research has found that, contrary to the traditional view of giraffe herds as loose collections of non-bonded individuals, giraffes have a very structured social system based upon strong social bonds. Other species with this kind of social system (such as elephants and buffalo) are strong vocal communicators, which is thought to be crucial in maintaining group cohesion.

Clearly, resolving this question requires a more thorough investigation of giraffe vocalisations, one that systematically searches for audible patterns that might represent forms of communication. It is exactly such a project that Dr Stoeger and her team undertook in their research, the results of which are published today in BMC Research Notes.

The researchers collected data from giraffes in three zoos in Berlin, Copenhagen and Vienna. Hundreds of hours of audio recordings were made of these giraffes, mostly recorded indoors at night, but also including recordings gathered outdoors during daylight hours. The team then analysed these recordings, searching for acoustic structures that resembled possible communications.

The vast majority of the recordings showed no evidence of any vocalisation patterns. As the researchers say in their paper: “exploring giraffe vocal communication turned out to be time consuming, tedious and very challenging”.

Tedious perhaps, but in the end worthwhile. Amidst the many hours of recordings, the researchers found a number of instances of a vocal pattern which, based on its acoustic structure, could potentially function as communication between giraffes.

This pattern, recorded 65 times across all three zoos, was a kind of humming vocalisation with a rich harmonic structure never before documented in the scientific literature. Notably this humming vocalisation, recorded only at night, had also never been heard by any of the zoo-keepers looking after the giraffes.

The meaning of humming

If the purpose of this humming is communication, what is it the giraffes are telling one another? Understandably, on this question the researchers can only speculate, especially as they are unable to determine which individual giraffe made the sounds, or provide any other data on the behaviour of the giraffes while humming.

They do however note that humming was only recorded when the giraffes had been separated into individual stalls for the night. This tentatively suggests that the calls allow group members to keep in touch when they are no longer able to see each other. This could explain why the giraffes remain silent during the day, when they can visually locate other group members.

Clearly, as the researchers stress, these are only the first steps in unravelling the mystery of giraffe communication. They conclude their paper with the hope that these tantalising results will encourage others to join the study of acoustic research in giraffes, while cautioning about the difficulty of conducting such research, especially with wild giraffes.

One solution the researchers suggest to this problem is to develop an automated monitoring/detection system that could link audio and video recordings. Given that the Stoeger group recently published research on the development of an automated audio detection system for elephants, perhaps they are just the people for the job?