Professor Chris Proudman, Head of the University of Surrey’s School of Veterinary Medicine, will soon swap Surrey for the racecourse at Aintree, where he will be part of the team overseeing the health and welfare of horses competing in the world’s most famous steeplechase, the Grand National. As the National Hunt season comes to an end, the Aintree Grand National Festival begins on Thursday 3rd April with an exciting day of racing, with Ladies Day following on the Friday and the Grand National itself on the Saturday.

The Grand National is steeped in history, crowning the winning horse a champion amongst champions.  It is the longest race in the UK horse-racing calendar, covering a distance of 4.5 miles, and tests the skills and endurance of both horse and jockey through a series of demanding fences, including Becher’s Brook, The Chair and the Canal Turn.

However, the Grand National is a race that has always divided opinion as to whether the health and safety of participating horses are truly considered.

Professor Proudman has been on the veterinary team for the three day Grand National Festival for more than 15 years and will be part of a team of 11 vets ensuring the highest standards of equine welfare and veterinary care during the festival.

Major advances in veterinary medical knowledge, in conjunction with stricter regulations (covering course irrigation, fence design, landing areas, start procedures, and loose horse catching areas) have seen major improvements in the on-course veterinary care and the subsequent welfare of the racehorses at  Aintree over the years.  Now, when the dreaded screen comes out, it no longer means the worst for any horse hidden by its veil, but now serves as a privacy measure whilst the vets provide a thorough assessment on the track.

The racehorse’s welfare is paramount

Before the racing gets underway, every competing horse has to pass a thorough veterinary inspection before being allowed to race. 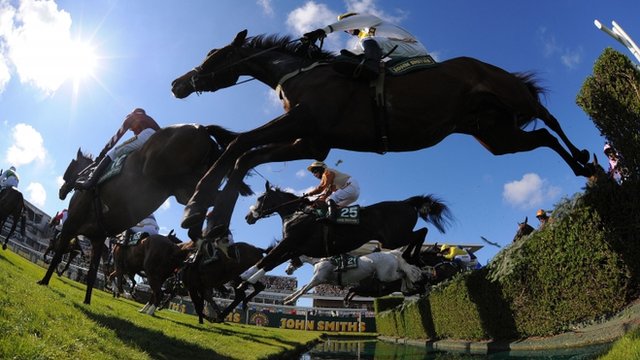 The British Horseracing Authority veterinary officers also take care of horse identification, sampling for anti-doping control and enforcement of the rules of racing.

During the event, a team of experienced racecourse vets are stationed around the course so that they can be immediately on hand to attend any incident.  Aintree racecourse has its own on-site first aid facility where state of the art diagnostics, including X-ray units, a solarium and  video endoscopy come as standard.

An important part of the veterinarian’s work at the racecourse is separating minor injuries from the more significant ones that may require further investigation at the University’s Equine Hospital at Leahurst on the Wirral.

Generally, the Grand National race will see many horses falling over the challenging fences.  Common injuries are cuts and hairline fractures.  Serious injuries are thankfully few and far between, but thanks to the advanced medical facilities at Aintree and the nearby Equine Hospital, a horse’s chance of survival is now better than ever.

Professor Proudman currently acts as a liaison between the racecourse management, the veterinary team, and the media, having provided veterinary treatment for horses for many years.  With social media providing a voice to the people on a global scale, incorrect information from the racetrack can provoke heated debate very quickly, giving one of Britain’s most prestigious sporting events a bad name.  So what is being done to reassure people that the health and safety of the horses is paramount?

Professor Proudman confirmed that his role “is to educate the media and horseracing followers about how seriously Aintree Racecourse and the racing industry take the issue of horse welfare.  I will be telling the story of meticulous preparation of fences and the racing surface, of massive investment in watering technology and of careful risk-assessment of every horse entered in the race.”

“Since I first started working at Aintree, the welfare of horses and the standard of veterinary care have increased significantly. The industry invests heavily in welfare research. During the past ten years, the Horserace Betting Levy Board has invested £25 million in research into racehorse health and welfare. The outcome of this is that we can now train horses more safely and effectively, we can create racing conditions that minimise the risk of injury and we are better able to protect horses against debilitating infectious diseases.”

He added, “It’s a very intense three days. More than 600 million people around the world watch the Grand National, an event with a rich and fascinating history. It is a tough challenge, but a fair one, for the very best racehorses in Europe. The winner is rightly lauded as a worthy champion.”

However, as Professor Proudman confirmed, the fun and games of the Grand National Festival don’t stop there and research into sports horse injuries, such as improving racetrack design, are by no means exhausted.  The University of Liverpool often colla borates with Aintree racecourse to conduct research between the two facilities.  The University of Liverpool’s Equine Hospital is one of the busiest in the UK, specialising in oncology, gastroenterology, orthopaedics and neurology.  Also, back at the University of Surrey, where Professor Chris Proudman now resides, there are plans to launch a new world-class School of Veterinary Medicine this year.  This is constructed around the theme that human and animal health is intrinsically linked, which will help to propel veterinary medicine further.

Similar to the vets in attendance at this year’s Grand National, BMC Veterinary Research is also committed to ensuring the safety and welfare of all animals is taken into consideration, especially in research studies.  Furthermore, the benefit of being an open-access journal means that anyone can access and read all of the excellent research being published in BMC Veterinary Research, helping to provide a greater and more widespread understanding of current developments in veterinary research and animal welfare.

Our top tip for the Festival may not be the winner of the ‘big race’ itself, but is instead that we should remember the hard work and specialised research that has gone into making the Grand National not only one of the most famous horse racing events of all time, but that the safety, health, and welfare of all participating horses has not been overlooked for the sake of entertainment.

Senior Editor at BMC Series
Hayley obtained her PhD in veterinary dermatology from the University of Cardiff, UK before joining BMC in 2009. Following her time working in the veterinary and medical field, Hayley was eager to help bridge the gap between these two disciplines, and she supports One Health Initiative and VetAllTrials. She is also the Director of the International Association of Veterinary Editors, and is involved in running author and referee workshops to help encourage and support young researchers. Hayley is currently a Senior Editor for the BMC Series and regularly contributes to the BMC Series Blog.