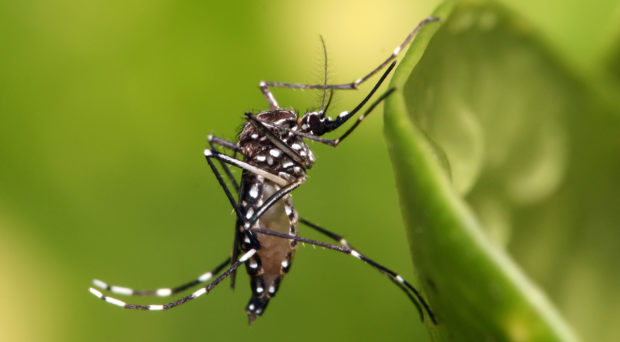 In the United States, we recently celebrated Thanksgiving, providing an opportunity to feel grateful. This is not an easy feat given the current state of our world, including how climate change, globalization and land cover change combine to increase the spread of vectors and vector-borne diseases globally. However, there are definitely some good news, from another lackluster year of low West Nile virus transmission in the US as well as the end of La Nina conditions causing heavy rain and flooding in Australia, contributing to the potential establishment of Japanese Encephalitis Virus down-under. Here, I’d like to talk about another good news, a recent technological advancement in the field of genetic control of mosquitoes.

Mosquitoes, such as Aedes aegypti, the yellow fever mosquito, transmit a wide variety of mosquito-borne diseases, such as dengue, yellow fever, chikungunya, Zika virus, and many others. Their anthropophylic lifestyle and fast lifecycle makes them difficult to control, with increasing levels of resistance developing against commonly used insecticides. Community-based methods to eliminate the breeding sites of these mosquitoes are effective but labor-intensive and difficult to sustain. Genetic methods to control mosquitoes goes back to the Sterile Insect Technique (SIT) used in the 1970s, where male mosquitoes that were sterilized by irradiation were released to mate with wild-type females, and their lack of offspring led to population reduction.

At the turn of the century, several research groups attempted to apply modern genetic methodologies to achieve similar outcomes without the need for irradiation and the resulting fitness costs. Luke Alphey and his colleagues at Oxford University developed a dominant lethal genetic system for autocidal control in the Mediterranean fruitfly, where a transactivator causes lethality in the early developmental stages of heterozygous insects unless repressed by tetracycline. The company he funded (Oxitec Limited) successfully adapted this system in several agriculturally important pest species, as well as in Aedes aegypti and other mosquitoes. (Full disclosure: I worked at Oxitec Limited in 2007, but own no shares or have any other conflict of interest with them). While the first generation of these mosquitoes proved to successfully reduce wild-type mosquito populations, they required labor-intensive separation of male and female mosquitoes before release in close proximity. While this ensured that only non-biting male mosquitoes are released, it also limited the scalability of this approach.

Now, a recent study by the company published in Frontiers in Bioengineering and Biotechnology demonstrated a revolutionary advance on the previous technology, making the method potentially much more user-friendly and scalable to control mosquitoes. The advance includes the development of a new strain of genetically modified mosquitoes (OX5034) which combines the previous technology with the Aeasx splicing module providing differential isoforms mRNAs in male and female mosquitoes, resulting in the tTAV protein only being expressed in female mosquitoes in the absence of tetracylene family antibiotics. Under those conditions, tTAV binds to tetO, which results in high levels of tTAV expression, leading to cell death during early larval stage in a positive feedback loop. Tetracycline family antibiotics suppress the expression of tTAV, making it possible to rear female mosquitoes, sustain a colony, and produce eggs in the laboratory. The OX5034 mosquito strain was developed by microinjecting the genetic construct including the above elements (and a DsRed2 genetic fluorescent marker) into wild-type Aedes aegypti collected in Chiapas, Mexico.

In the laboratory, the OX5034 strain performed as expected, producing male, but no female adult mosquitoes in the absence of tetracyclene, showing complete penetrance of the genetic construct. Males containing one or two copies of the gene were produced at the same rate as wild type mosquito males. Female mosquitoes were produced when tetracyclene was added, but in lower numbers compared to wild-type strain, with females carrying two copies of the gene affected more than females with a single copy. Males carrying two copies of the gene reared without tetracycline lived shorter than wild-type males, but there was no difference in longevity in males with a single copy or when given the antibiotic. Female mosquitoes reared with the antibiotic also lived somewhat shorter than wild-type females. Males with two copies of the gene were slightly, but not significantly less competitive compared to wild-type males in mating trials. The strain was also completely susceptible to commonly used insecticides. When mosquitoes of this strain were released in cages with wild-type mosquitoes, and their offspring reared without the antibiotic, the genetic construct completely disappeared from the population in about 7 generation, with it’s frequency halving in each generation, in accordance with theoretical predictions.

Oxitec collaborated with the state of São Paulo in Brazil to test the performance of the strain under field conditions in the city of Indaiatuba, after obtaining required permits from Brazil’s National Technical Commission on Biosafety. Male mosquitoes were released in four city neighborhoods between May 2018 and April 2019. Two of the areas received 100 male mosquitoes per person per week, while the other two received 500 male mosquitoes per person per week. Male mosquitoes were released three times per week, in the form of male pupae in release pots. Throughout the study, mosquitoes were monitored in the four treatment and one control area using ovitraps and BG-Sentinel traps. A mark-release-recapture study was also conducted to study the longevity and dispersal of released mosquitoes, which found that the released male mosquitoes on average travelled 54.8 m and lived only on average for 1.3 days. Despite this short life-span, the released mosquitoes were able to suppress the natural Aedes population by anywhere between 72-96% when comparing the mosquito abundance in the areas with male releases to the mosquito abundance in the control area where they were not released. No fluorescent females were seen emerging from any of the ovitraps collected in the field, confirming that the genetic construct had 100% penetration, killing all the female larval progeny of the released males. The genetic construct completely disappeared from the local mosquito populations by at most 6 month after the end of the male releases.

In summary, the OX5034 strain represents a significant advancement in the genetic control of Aedes mosquitoes, avoiding the complicated and expensive step of sorting mosquito pupae for male-only releases by genetic sexing. The performance of this strain is comparable in the laboratory and field to the previous version of genetically modified mosquitoes, and is more than sufficient to suppress wild-type populations at even the lower dose applied. An additional benefit is that the release of these male mosquitoes can make the overall mosquito population less resistant to insecticides by bringing in susceptible alleles into the population. Finally, the genetic construct disappears after the end of releases, allaying concerns of long-term changes in the mosquito population.

While in this published study male mosquitoes were released as pupae, Oxitec has already tested, permitted and marketed an even easier, egg-based release strategy. Since eggs of Aedes aegypti can survive dessication for many months, they can be safely stored and transported to wherever they are needed. They only need the addition of water and some larval diet to develop and be deployed. Oxitec has already launched a line of products under the brandname Friendly™ Aedes aegypti in Brazil, which are basically a plastic container that people can fill with water and a cartridge containing the male OX5034 eggs and larval diet to produce and release their own genetically modified mosquitoes. These mosquitoes will then supress wild Aedes aegypti populations in their vicinity, potentially reducing disease risk.

I see great potential for this technology, especially if it becomes easily available and affordable, so that there is sufficient spatial and temporal coverage to keep Aedes aegypti populations low enough to avoid outbreaks of the diseases they transmit. Oxitec also received approval from the US EPA to conduct field trials in both Florida and California. I’m looking forward to their subsequent publications on the results of their field studies using the egg-based mosquito release devices. I can’t wait for the day when I can order my own Friendly™ Aedes aegypti online to take with me on a tropical vacation, or use it in my classroom or in the lab!