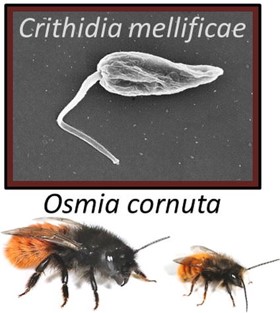 Susceptibility to infection in Hymenoptera

Several regions of the world have reported a decline in wild bee species. A contributing factor may be pathogen spillover from managed honeybees, and a variety of pathogens so far exclusively linked to honeybees have been detected in several wild bee species.

However, the detection of a pathogen does not necessarily mean the infection is spreading per se. Pathogens may behave differently within a novel host, where a species may not serve as a suitable host or the parasite does not replicate. Disease progression and symptom intensity can also differ both between and within species.

Several factors influence host susceptibility to pathogens and infection, such as life history traits (e.g. reproductive strategies and sociality), environmental traits, nutrition and the genetics of the host and pathogen. For example, greater infection resistance is typically observed in hosts with genetic heterozygosity and in social groups with higher genetic diversity. The haploid susceptibility hypothesis predicts in Hymenoptera the haploid males from unfertilized eggs should have higher susceptibility (compared to diploid females) as they lack heterozygosity.

Trypanosomatids are unicellular eukaryotic flagellate parasites, and some species colonize the hindgut of bees. They damage intestinal cells through formation of hemidesmosomes, and these lesions can reduce host health at the individual and colony level. In bumblebees, parasite cells multiply after oral ingestion and are transmitted to novel bumblebee hosts via fecal-oral transmission.

In a recent paper, Strobl and colleagues tested whether this parasite could infect a solitary bee by challenging male and female O. cornuta with C. mellificae. The authors also employed honeybee workers as positive controls to assess infection parameters in a known host. Bee body mass, survival and pathogen infection levels were evaluated as measures of susceptibility.

In all groups of bees, body mass did not significantly change over time p.i. (all P> 0.05) or differ between control and C. mellificae–exposed individuals.

In O. cornuta bees, C. mellificae numbers increased 2–3.6 fold within cages but did not significantly change between days 6 and 19 p.i. in individual females or males. In both female and male O. cornuta, the proportion of infected individuals increased over time p.i.

A significant positive correlation between C. mellificae cell counts and C. mellificae genomic equivalent copies per bee was also observed in all groups of bees.

A walk on the wild side for trypanosomatids

Strobl and colleagues demonstrate that the solitary wild bee O. cornuta can host the honeybee parasite C. mellificae, and that males are more susceptible. The proportion of infected hosts also increased in O. cornuta cages with feces, but not in honeybee cages without feces. This indicates a fecal-oral transmission route for C. mellificae, as with Crithidia species infecting bumblebees.

The reduced survival of infected honeybee workers provides some causal evidence for the correlation between overwintering colony mortality and C. mellificae infection levels. With evidence of a negative effect on managed honeybee species and male wild solitary bee species, field studies are required to evaluate spillover potential from managed to wild bees and vice versa.