Long before the first living creature was sent into space, humans have looked up at the night sky and wondered what it would like to live in space. Space agencies and commercial companies are researching longer term habitation in space and on other worlds. We all assume that, one day, we will establish colonies on other planets and celestial bodies (e.g moons), but not many people have considered whether there are other Earthlings better adapted to space colonization than us … microorganisms. The microorganisms that make up our microbiota will also come with us if and when we colonize another world. How they adapt could also influence our own ability to colonize other planets. 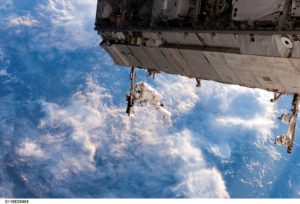 In 2015, Aleksandra Checinska and colleagues published a study of the International Space Station that showed microbes from the human skin form a substantial part of the ISS microbiota. The results indicate better cleaning regimes are required on the ISS and that these microorganisms could  affect the health of astronauts. A recently published article by the same group looked at the mycobiome (fungal microbiota) of a prototype lunar modules during a 30-day occupation period by a group of humans. Fungi can live in extreme environments on Earth, so should be relatively amenable to living in space and on extra-terrestrial bodies. The study showed human presence influenced fungal presence and diversity within the lunar module, and consequently could affect human health in space. Furthermore, the presence of fungi in the module could affect its structural integrity, impacting the safety of the occupants.

These two studies show how our microbiota can cause health or safety issues in space when they leave our bodies and enter the surrounding environment, but what about the impact of space travel on our microbiota when it is still inside us? NASA recently investigated these effects on two ISS missions between 2013 and 2016, collecting swab samples (saliva, blood, sweat and fecal) from astronauts over the course of their missions. The results have yet to be published, but the fact that the investigation occurred indicates a belief that the impact of space travel on our microbiota is a serious concern.

Considering how closely our microbiota affect our lives here on Earth, it is not surprising that they could impact our ability to colonize the moon or any other celestial body. Even the journey to these new homes could be hampered or helped by our microbiota. Could certain microorganisms within our microbiota enable us to adapt better to space travel? Would our microbiota colonize other worlds successfully before we do? Or would deep space travel send our microbiota into meltdown? It would be interesting to see whether our microbiota, rather than technology, were to be the limiting factor in space exploration.