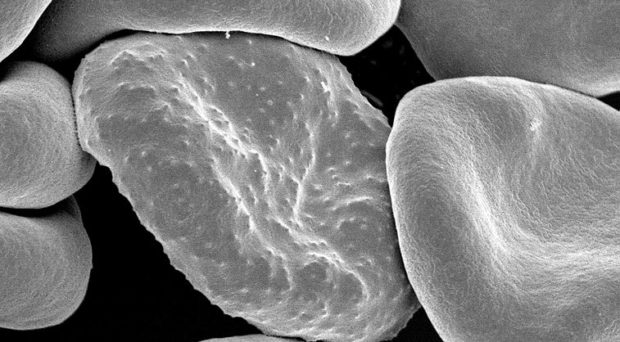 The more mosquitoes are attracted to humans the more likely malaria transmission will occur.

Several studies have shown that mosquitoes find malaria-infected mice, birds and humans more attractive than non-infected ones. This enhanced attractiveness has been associated with the presence of the gametocyte stages of the parasite in the blood.

The gametocyte is the stage that undergoes sexual reproduction and multiplication in the mosquito and is responsible for this phase of transmission. Host odour enhancement and a change in the profile of individual components of the volatiles given off by infected mice suggests malaria infection alters the signal that blood seeking mosquitoes are receiving, thus making hosts more attractive, and transmission more likely.

An important question that arises from these studies is whether the odour changes were caused by a response by the infected host to the presence of the parasite (caused for instance by components of the immune system) or whether molecules produced by the parasite itself are causing the changes. One of the practical implications of finding the answer to this question would be of value to the production of odour baits for mosquito taps.

If one or more molecules of parasite origin were causing hosts to be more attractive to mosquitoes then it is reasonable to suppose these attractants are released into the blood by the parasite.  One molecule produced by malaria parasites is (E)-4-hydroxy-3-methyl-but-2-enyl pyrophosphate, known as HMBPP .

HMBPP is absent from humans but is released into the blood by the malaria parasite Plasmodium falciparum where its presence activates the major population of T cells in peripheral blood. It also triggers innate immune responses in the malaria mosquito Anopheles gambiae.

In a recent paper published in Science, a Swedish group led by Ingrid Faye describe the effect that HMBPP has on mosquito blood feeding behaviour, fitness and susceptibility to infection.

HMBPP as a mosquito attractant

Further experiments showed that volatiles given off by blood supplemented with HMBPP was as attractive to mosquitoes as blood infected with the gametocytes or asexual stage parasites. An examination of these volatiles showed that red blood cell production of CO2 (a known mosquito attractant) increased when HMBPP was added, as did production of aldehydes and monoterpenes. Thus the parasite, via the production of HMBPP, caused an increase in red blood cell derived mosquito attractants.

Mosquitoes feeding on HMBPP supplemented blood also probed for blood more and took bigger bloodmeals, but, although bloodmeal size is directly related to the number of eggs mosquitoes produce, this did not increase egg production, not did it affect lifespan.

A further effect of HMBPP that would appear to enhance malaria transmission was related to the parasite’s development in the mosquito. When HMBPP was added to a bloodmeal  containing  gametocytes a greater number of parasites survived to produce oocysts on the midgut wall and the salivary glands stage, the sporozoites increased.

Ingrid Faye’s research team used illumina sequencing to get an overall picture of how HMBPP might cause these diverse effects.

A comparison of gene expression when mosquitoes were fed blood with or without HMBPP identified the upregulation of a set of genes whose products modulate neural synapses. This may affect the changes in feeding behaviour that are observed when mosquitoes are fed HMBPP or feed on infected hosts.

The presence of HMBPP also caused changes in the temporal expression of genes involved in immune defences and a general downregulation of oogenesis genes.  In particular, at the time when parasites would be traversing the mosquito midgut, an 80% downregulation of differentially expressed genes occurred, including ribosomal genes which would affect the translational machinery.

The authors of this paper suggest that downregulation of genes involved in oogenesis may explain why, despite the larger bloodmeals taken by HMBPP-fed mosquitoes, there was no change in fecundity.  They reasoned that the additional nutrients could be used to sustain the parasite. This, together with changes in immune genes, may explain the increase in the intensity of infection observed.

I am particularly excited about the interesting results reported in this paper because it offers one possible explanation for much of the findings from my laboratory, beginning from over two decades ago. These concerned the effect of the rodent malaria, Plasmodium berghei, on blood feeding behaviour and the reduction of the transcription of the mosquito vitellogenin gene, follicle cell apoptosis, oocyte resorption and the resultant reduction in fecundity and fertility- despite blood meal sizes being the same or slightly bigger than uninfected mosquitoes. Perhaps HMBPP present in infected blood was, at least partly, responsible for all this.

It is certainly clear that HMBPP is a mosquito derived molecule that modulates the behaviour and physiology of mosquitoes in a way likely to increase the fitness of the parasite without decreasing mosquito lifespan and thus to enhance the transmission of malaria. HMBPP definitely warrants more attention from vector biologists.

As this is blog was not written by the authors of the paper we suggest you approach them directly with your question.
Thanks for your interest in BugBitten