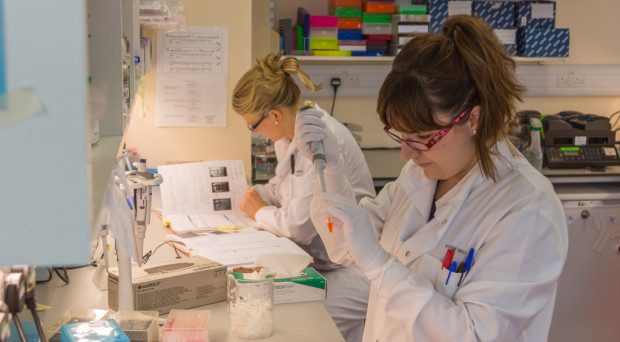 Bryony and her PhD student in the lab.

Everyone complains about their job.

There’s always too much to do (or not enough); it’s too hard (or too easy); or the salary is rubbish (although I’m pretty sure nobody has ever complained about being paid too much).

I’ve written several blog posts for BioMed Central now, and in some of them I admit I’ve had a bit of a whinge. There’s the irksome issue of impact factors, and the disproportionate effect they have on career progression for young scientists; and the bizarre fact that scientists leaving academia often feel like somehow they’ve failed.

So I thought it was high time I put pen to paper on what it is that I love about my job. Because, believe it or not, I think that being a scientist is pretty cool.

I’m a molecular geneticist (a surefire way to kill the conversation after the classic ‘So what do you do?’ question at dinner parties). I have always been absolutely fascinated by the fact that our entire body is constructed based on the information contained in a four-letter code. This blew my mind aged 15 when I was first told what DNA was, and it still blows my mind now.

I get paid to try and work out how the information contained in this code is translated into a living, breathing human being. It might not float everyone’s boat, but personally I think that’s a fairly awesome way to earn a living.

The thing that still strikes me about my job is that I get to design experiments to answer questions that nobody knows the answer to. Admittedly, that comes with the angst of convincing myself (and, of course, others) that I’ve got it right, and dealing with the fact that maybe some of the time I don’t.

It’s frustrating, it’s exhausting, and it’s stressful. But when it works – it’s incredible.

But all of the time, by definition, I’m pushing the boundaries of our knowledge of how the world works. Which, agreed, might sound somewhat self-congratulatory, but it’s true – and when I have a bad day, I try and remember this, and how much of a privileged position I’m in.

And of course there are bad days, and sometimes it’s downright miserable: I spend hours or days or weeks or months banging my head against a wall trying to get something to work, or to understand a piece of software, or to optimize a new piece of equipment.

But when it works – it’s incredible.

So yes: whilst the hours are crazy, the work/life balance is essentially non-existent, and a lot of the time I come home seething, I feel incredibly lucky to do what I do for a living. As a friend of mine recently pointed out, I get paid to think. And that’s quite a luxury.

This is the sixth post in Bryony’s series: ‘Trials, tribulations, triumphs, and test tubes: life as an early career researcher’.

Agree with you a 100% Bryony!
It blew my mind when I learned about “Dolly” the sheep and it has been quite an interesting journey since ( quite a bit of turbulent one I might add)!. It is the passion for research that gets me going. All those tedious tasks of meticulous designing and optimising experiments. It might look mundane from the outside but it is absolutely wonderful when it works. All those long hours boil down to a single blot or a graph, mischievously hiding all the grief and tears that went into producing it. One might want to frame it and put it on a wall! Personally I strive on solving that one little riddle that no one else can ( Oh! and yes coffee lots of coffee!)
Cheers
Imran
(Tired Phd student working late night! I shouldn’t be writing this when my brain is numb but what the hell, I can always regret tomorrow! )

I could not agree more – I was at a conference last month talking to a colleague who had about a year’s worth of data in one bar graph…it’s so deceptive! It sounds as though all that coffee might be pouring into one such graph of your own (those late nights are all too familiar!) I hope you get there soon, and that wonderful moment of success and relief isn’t too far away!

I agree it must be true

I found your article interesting because you are writing from the perspective of a practising scientist. Many young people want to be scientists usually inspired by breakthroughs and not the challenges of working towards breakthroughs. I published a book last year to guide young people about what different scientists do. The book covers wide range of scientists from astronomers, geneticists, geologists to botanists, chemist and so on. On a lighter note to help them learn to answer ”and what do you do”.
I will share your write up with my son who want to be a scientist.