Daily geomagnetic disturbances, or geomagnetic storms, are temporary distortions in the Earth’s magnetic field caused by solar wind shock waves that strike the magnetic field hours after a solar event. These geomagnetic storms are the cause of the aurora at the earth’s poles, and have been found to affect the physiology, standard metabolism and behavior pattern of humans and other species (e.g. birds, whales, reptile, insects, and bacteria).

High geomagnetic disturbances are usually associated with solar flares and solar coronal mass ejections, in which billion tons of high energy magnetic plasma from the sun is released into the solar wind. This release of high energy magnetic varies according to the 11-year solar cycles, and is more intense during solar maxima periods. These periods are also characterized by a high number of geomagnetic storms (GMD) that have been linked to numerous health outcomes, including cardiovascular diseases (CVD), neurological system diseases, behavioral diseases, and total deaths.

While previous research groups have found evidence of the connection between GMD and CVD, there is a need to determine the temporal and spatial impact of short term exposure to geomagnetic disturbances on deaths in a larger cohort. To address this, we conducted a large national epidemiological study to investigate the effects of geomagnetic disturbances on total and cause-specific mortality in 263 U.S. cities.

But how do increased geomagnetic disturbances lead to an increase in deaths related to cardiovascular diseases and myocardial infarction?

Our results may be explained through the direct impact of environmental electric and magnetic fields produced during GMD on the human autonomic nervous system. Interactions between GMD and the autonomic nervous system are likely to induce a cascade of reactions in the body’s electrophysiology that culminate in the collapse of organ functions and death. 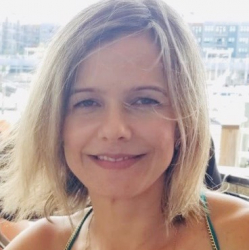 Carolina Leticia Zilli Vieira (DDS, PhD in cardiology sciences) is a research associate in the Department of Environmental Health at the Harvard School of Public Health. She is currently co-coordinating an environmental education program for children in public schools in Brazil and USA and has conducted research to investigate the effects of solar activity on environmental risk factors (from natural or anthropogenic sources), and its impact on human health and evolution.